Did the U.S. Army seize vote-count servers in Germany operated by Dominion, the company that provides voting machines to many American states? No, that's not true: There is no sourcing for a tweet cited by U.S. Rep. Louie Gohmert for the claim, which the congressman admits he does not know to be true. Dominion is not affiliated with Scytl, the company cited by Gohmert as owning the German servers. The company said the U.S. military has not seized any of its servers and it is based in Spain, not Germany. No American voting information is housed on its servers outside the United States, the company said.

The claim appeared in an article published by The Geller Report on November 14, 2020, titled "US Army seizes Dominion servers in Germany, Trump lawyer vows, 'I'm going to release the Kraken'" (archived here), which opened:

The evidence for massive voter fraud continues to pile up, and these two new developments could break the whole thing wide open. The Dominion servers may reveal just how extensive the fraud was -- they could be the gamechanger. And Trump lawyer Sidney Powell says it's "irrefutable" that Trump won in a landslide. The media's desperate attempts to discredit all claims of fraud, dismissing them with hasty and shoddy rationalizations, and to shut down all discussion of the matter shows how close the Trump team is to exposing the entire massive enterprise. Freedom, and the future of the nation itself, hang in the balance.

Facebook Twitter Google+ The evidence for massive voter fraud continues to pile up, and these two new developments could break the whole thing wide open. The Dominion servers may reveal just how extensive the fraud was -- they could be the gamechanger. And Trump lawyer Sidney Powell says it's "irrefutable" that Trump won in a...

The article sourced the claim about a German server being seized by the American military to this tweet posted on November 13, 2020, by George Papadopoulos, a former foreign policy adviser to Donald Trump who went to prison for lying to the FBI about his contacts with Russians during the 2016 campaign. There is speculation that Papadopoulus is in line for a presidential pardon before Trump leaves office:

Breaking: Congressman Louie Ghomert has stated that The U.S. Army has seized servers for Dominion in Germany.

Breaking: Congressman Louie Ghomert has stated that The U.S. Army has seized servers for Dominion in Germany.

Papadopoulos was referring to comments Rep. Gohmert made on a Zoom call broadcast by Newsmax, as related in this tweet:

Louie just said .. The US Army went in and confiscated Scytl's SERVERS !!!
Scytl voting machine is out of Barcelona, Spain
Scytl morphed into Dominion

Louie just said .. The US Army went in and confiscated Scytl's SERVERS !!!
Scytl voting machine is out of Barcelona, Spain
Scytl morphed into Dominionhttps://t.co/78y8iSNJtc

Rep. Gohmert, a Texas Republican, said on the Zoom call that on Sunday he was given:

"... information from some of our former intel people that there was extremely compelling evidence that could be gleaned from Scytl, that's a company headquartered in Barcelona, Spain, that was responsible for aggregating all of the information from all the machines and what not. But now the main headquarters had moved to Frankfurt."

Gohmert claimed that he was given more details early Monday, but that the U.S. military had already taken action:

... it turns out, I don't know the truth, I know that there was a German tweet in German saying that on Monday U.S. Army forces went into Scytl and grabbed their server. There are some that believe this is the U.S intelligence that manipulated all this to cover their own rear ends.

Here is the video clip of Rep. Gohmert's comments:

Rep. Gohmert repeated the claim in a Newsmax interview:

Lead Stories found a copy of the German tweet (archived here) that Gohmert appeared to be referencing: 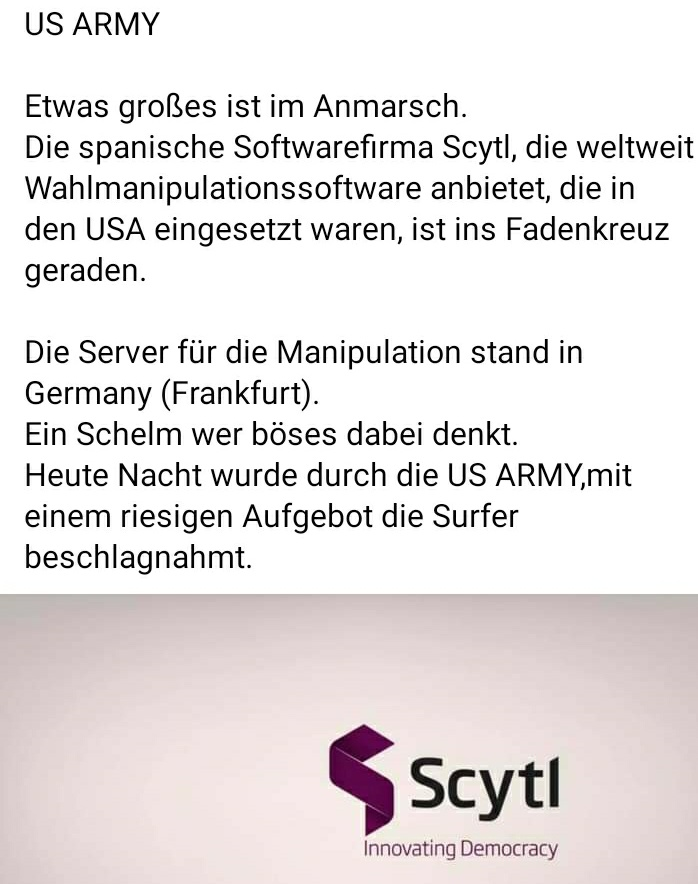 This is a translation of the German tweet into English:

Something big is coming. The Spanish software company Scytl, which offers election manipulation software worldwide that was used in the USA, is right in the crosshairs.

The server for the manipulation was in Germany (Frankfurt). A rogue who thinks evil about it. Tonight the USA ARMY confiscated the surfers with a huge contingent.

There is no sourcing for this information and no independent confirmation that the claim is real. In fact, Gohmert acknowledged in his interview that "I don't know the truth."

How do we know it could not be true? Scytl, the company in question, released a detailed statement, but it was not accessible online at the time of writing. Lead Stories archived it here.

The company pointed out that it is not headquartered in Germany, no servers have been seized by American military or intelligence, no American vote-counting information is on any servers outside the United States, and it is not affiliated with Dominion.

This is the full statement:

Following several erroneous statements that have been published in digital and social media, Scytl would like to clarify the following:

NewsGuard, a company that uses trained journalist to rank the reliability of websites, describes gellerreport.com as:

A blog run by activist Pamela Geller that portrays Islam and its adherents in a negative light. The site has published false claims about former U.S. President Barack Obama and the COVID-19 pandemic.