Did the U.S. Supreme Court vote 6-3 to take up the Texas Attorney General's lawsuit seeking to overturn four other states' 2020 election results? No, that's not true: There is no such vote recorded on the Supreme Court's public list of orders, nor has there been a press release announcing a decision to hear the case. National news coverage of the lawsuit on both Fox News and CNN reported the lawsuit had been filed but the court had not yet announced if it will hear the case. The attorney general of Tennessee has not announced the state will be joining the lawsuit. As of 2:30 p.m. ET on December 9, 2020, neither of the claims are true.

The claim appeared as a post (archived here) where it was published by John Schneider on Facebook on December 9, 2020. It opened:

BREAKING! The Supreme Court ruled 6-3 to take up the lawsuit from Texas, which now has a total of 10 states (Tennessee just joined) banning together to save America!

"Dukes of Hazzard" actor John Schneider made the false claim that the Supreme Court vote 6-3 to hear the case filed by the state of Texas, and Schneider claimed the state of Tennessee joined the lawsuit. The claim is false on both counts.

BREAKING! The Supreme Court ruled 6-3 to take up the lawsuit from Texas, which now has a total of 10 states (Tennessee just joined) banning together to save America! That means JusticeJohn Roberts even voted for the good guys! That AND the suit in PA is still in effect!
Can we all say that December 8th was a bad day for Biden?
This date will be remembered for years to come!
#jailtimejoe #KeepAmericaGreat2020 #JusticePrevails #ConstitutionMatters

Texas Attorney General Ken Paxton filed a lawsuit with the Supreme Court asking to invalidate the presidential election results in Pennsylvania, Georgia, Wisconsin and Michigan, according to NBC News. The lawsuit alleges "unlawful election results" in those four states, which Joe Biden won. While several states have filed "friend of the court" briefs in support of Texas' position, they are not parties to the suit.

The lawsuit claims: Pursuant to 28 U.S.C. § 1251(a) and this Court's Rule 17, the State of Texas respectfully seeks leave to file the accompanying Bill of Complaint against the States of Georgia, Michigan, and Wisconsin and the Commonwealth of Pennsylvania (collectively, the "Defendant States") challenging their administration of the 2020 presidential election. 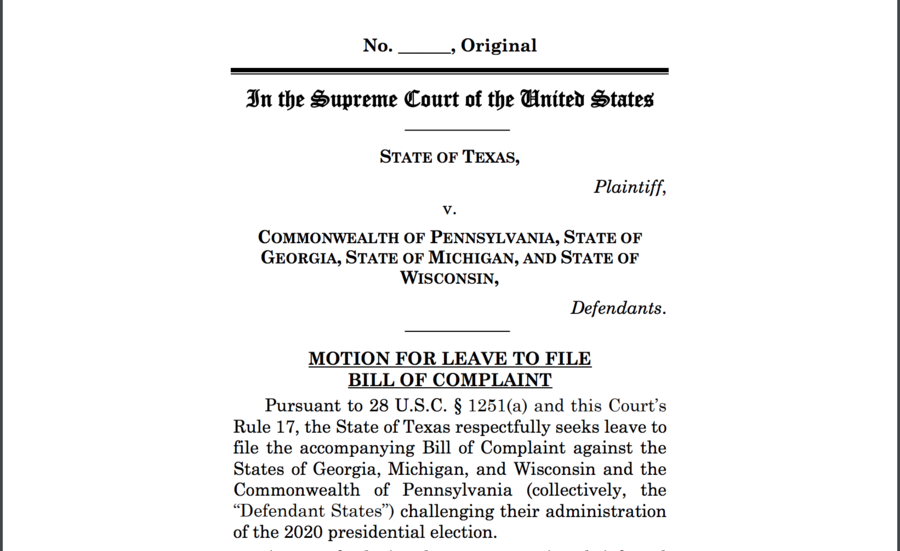 According to Fox News in an article titled, "Trump touts Texas Supreme Court case as 'the big one,' says 'we will be intervening,'" and published at 10 am on December 9, 2020, Arkansas, Missouri and Louisiana's Attorneys General said they would be joining the lawsuit.

Tennessee was not a part of the lawsuit at the time of publication of this story.

An amicus brief was filed with the Supreme Court on December 9, 2020 by 17 states, including Tennessee but the state still had not joined the lawsuit.