Did Republican campaign staffers assigned to observe at the Fulton County, Georgia, vote counting center on election night swear under oath in affidavits that they were told to leave before the ballot counting ended on election night? No, that's not true: Republican field staff workers Michelle Branton and Mitchell Harrison related under oath what happened at the State Farm Arena on the evening of November 3, 2020, but their narrative did not include the claim that they were told to leave before ballot scanning ended. Their affidavits filed in support of President Donald Trump's lawsuit aimed at overturning Joe Biden's Georgia win both said a supervisor "yelled" to the election workers who were prepping ballots for scanning to "stop working" and return the next morning. The observers said they eventually followed those workers out, but they never claimed they were told to go, prevented from staying, or banned from returning. Their description of events closely match what the chief investigator for the secretary of state told Lead Stories.

The claim was made by a Trump lawyer in a Georgia Senate hearing and repeated in many social media posts, including a tweet (archived here) posted on December 4, 2020, that linked to an interview with a Trump lawyer. It opened:

#GeorgiaHearing: Trump's Attorney @JennaEllisEsq said the committee seems very interested in the evidence. "Particularly the video. Because that corroborates the affidavits... Seeing that, I think provides even more evidence and it's very compelling."

The claim that GOP vote count watchers were told to leave the vote count center in Atlanta before the ballot scanning actually ended is the cornerstone to Trump's charge that the Georgia election was stolen from him. His lawyers allege that crooked election workers cleared the room of observers so they could double count ballots from precincts where Joe Biden's support was strong. It would be enough to account for Biden's 12,000 vote margin of victory in Georgia, they argued. The presentation to Georgia senators on December 3, 2020, included 90 seconds of edited security camera video that purportedly showed several election workers rolling out "suitcases filled with ballots" from under a table after the Republican observers were gone. Our debunk titled Fact Check: Video From Georgia Does NOT Show Suitcases Filled With Ballots Suspiciously Pulled From Under A Table; Poll Watchers Were NOT Told To Leave included quotes from the chief investigator for the secretary of state's office, a state elections board monitor who was at the vote count center for much of the evening, and Gabriel Sterling, a Republican and Georgia's voting system implementation manager. Sterling told Lead Stories the video showed nothing unsual:

If you look at the video tape, the work you see is the work you would expect, which is you take the sealed suitcase looking things in, you place the ballots on the scanner in manageable batches and you scan them.

Frances Watson, who led the probe into the allegations for the Republican secretary of state, told Lead Stories she concluded that the Trump observers were not told to leave the vote count center:

Nobody told them to stay. Nobody told them to leave. Nobody gave them any advice on what they should do. And It was still open for them or the public to come back in to view at whatever time they wanted to, as long as they were still working.

Trump attorney Jackie Pick said the affidavits support the claim that the election supervisor "cleared out" the vote counting center before secretly continuing with their work. "At about 10, there was one person working the polls who told everyone in the room to leave," she said.

The Trump lawyers' claim, which included in a lawsuit filed on Friday, December 4, 2020, against the Georgia secretary of state and the state elections board, that the campaign observers swore they were told the vote counting had ended for the night and they were told to leave. The lawsuit is asking a judge to overturn the Georgia election and order a new presidential vote in the state.

Lead Stories obtained the affidavits signed under oath by Republican observers Mitchell Harrison and Michelle Branton, which were also included in a previous lawsuit.

After that last employee completed her stack at approximately 10:30 p.m., a woman across the room where the scanners were allegedly located yelled to everyone to stop working and to return the next day at 8:30 a.m. This lady had appeared through the night and Mitchell and I believed her to be the supervisor. 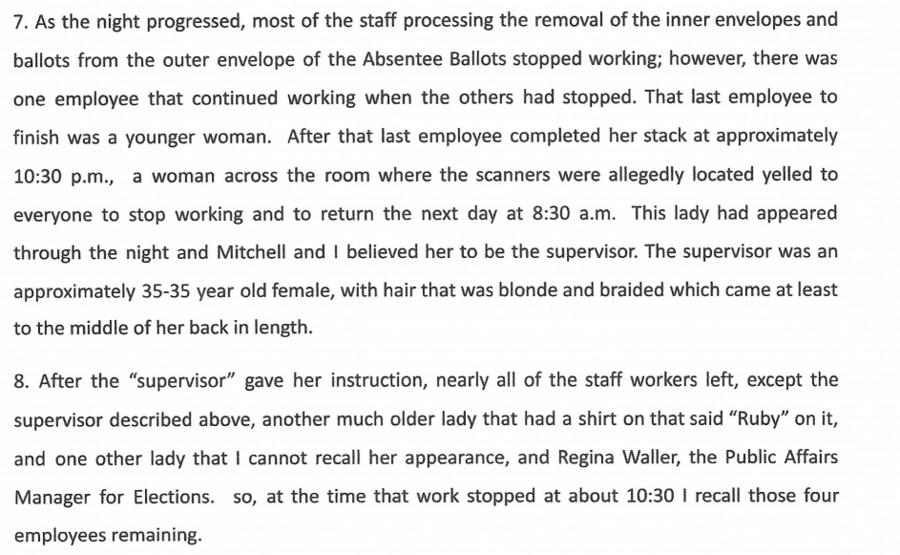 Branton said she and Harrison left the vote counting center after failing to get a count of how many ballots had been processed and how many remained to be processed from the media information officer:

Nowhere in her statement does she say she was directly told to leave or prevented from staying.

Harrison, a Cherokee County, Georgia, college student who also works as a field organizer for the Republican Party, said in his affidavit that he could not see the scanners used to count ballots from where he was positioned. His account is similar to Branton's, in which he heard the supervisor yell to the workers they should stop and go home.:

Sometime after 10 o'clock p.m., the counting activity slowed. Shortly afterward, a younger lady with long braided but blond hair yelled out to all of them they should stop working and come back tomorrow (the next day, Wednesday November 4th) at 8:30 A.M. Thereafter, all but 4 election employees left the State Farm, leaving just the blond haired lady (who Michelle and I assumed was the Supervisor), two older ladies and Regina Waller at the location. This lady had appeared through the night and Michelle and I believed her to be the Supervisor.

Harrison said he and Branton " were then told to return to the Fulton County Board of Elections Warehouse," but the affidavit does not say who gave that instruction. There is no indication it was an election official involved in the vote count.

Harrison and Branton both said the learned later from a news crew that the vote counting was continuing. Branton said she returned to the State Farm Arena and was told the counting had "just finished." She gave no indication that she was prevented from returning.

Sterling explained that election workers known as "cutters" -- because their job was to open absentee ballot envelopes and verify ballots for eventual scanning and counting -- were dismissed for the night sometime after 10 p.m. on November 3, 2020, because their work for the evening had been completed, he explained. Those workers who remained were responsible for conducting the scanning portion of the process, since ballots could not be left without being scanned overnight.