Do National Guard troops need the hotel rooms President Trump reportedly offered them in DC? No, that's a claim that's missing context and an assertion without evidence: Photos of troops reportedly forced into the garage of the Capitol Building were on a rest break, they were not ordered to sleep there. "All guard members who come here have appropriate lodging facilities," Wayne Hall, with the National Guard Bureau of Public Affairs, told Lead Stories. At the time of writing, there was no confirmation the former President offered rooms in his hotel in downtown Washington, D.C.

The claim appeared as a post (archived here) where it was published on Facebook on January 22, 2021. It opened:

BREAKING! President Trump has given permission for National Guard troops to stay in his Hotel in DC!

BREAKING! President Trump has given permission for National Guard troops to stay in his Hotel in DC! That is a real leader! He is America's President! He is The Military's President! Let's work on getting him back together! United we stand!
#RebirthOfAmerica #ArmorOfGod #MOVEtheline #thehiphoppatriot #LiveFromAmerica #TeamTrump

Reports that the National Guard members' bivouac was moved to the parking garage at the Capitol were misleading. The guards were not forced to sleep there, as they have other living accommodations while they're in the nation's capital providing security for the Inauguration, Hall told Lead Stories via telephone on January 22, 2021. Hall said photos of soldiers in the Capitol garage were taken during rest periods between guard shifts.The garage is heated, has electricity and restrooms.

Senator Tim Scott shared photos of the guards in the garage.

Our troops deserve the utmost honor & respect for securing the Capitol & defending democracy this week.

This is unconscionable & unsafe. Whoever's decision this was to house our National Guardsmen & women in underground parking lots must be held accountable. pic.twitter.com/mBwpoog6YC

Here are more photos of the guards resting. 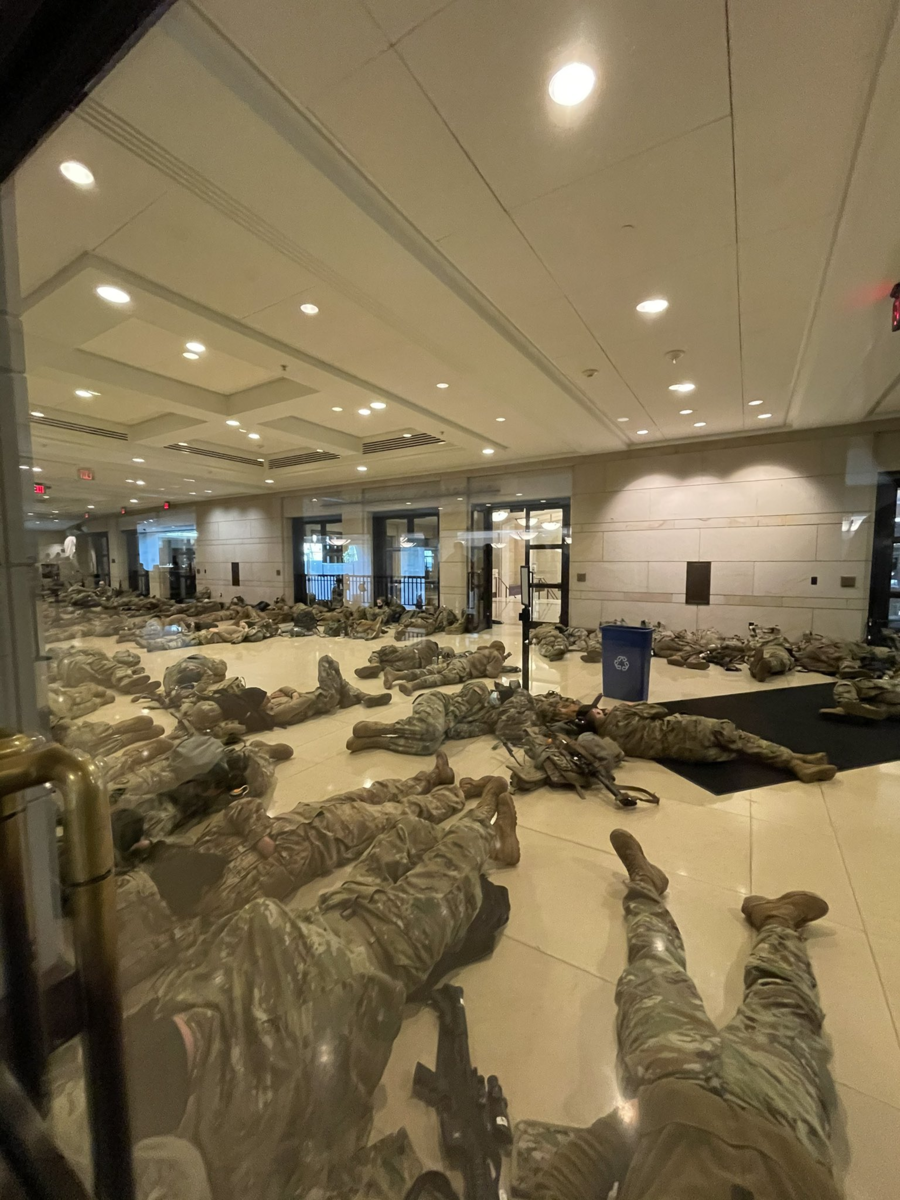 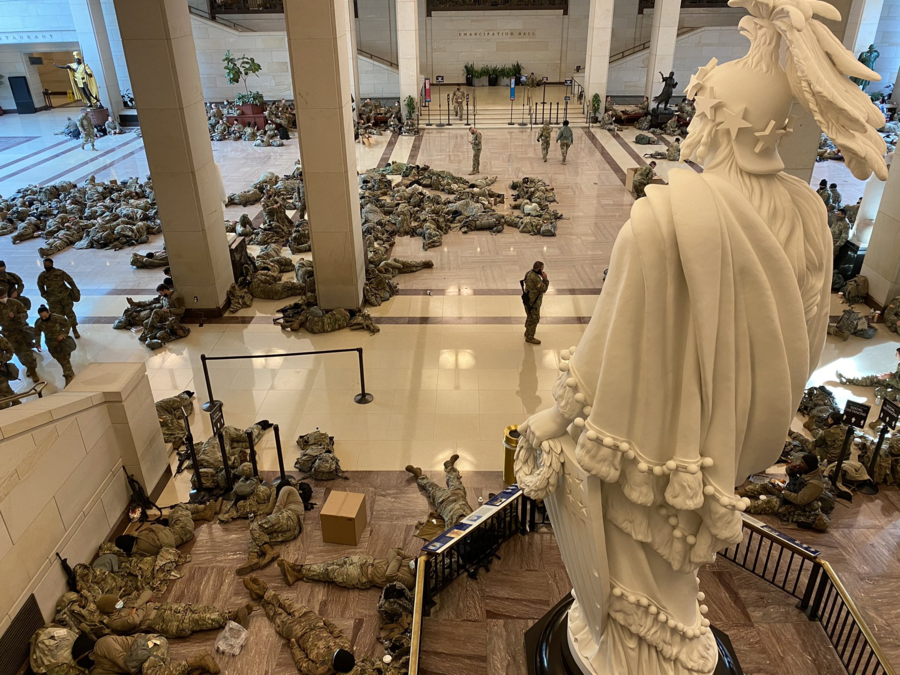 The National Guard and the US Capitol Police released a joint statement about the situation:

The USCP and the National Guard have coordinated their efforts to ensure that National Guardsmen and women are stationed throughout the Capitol Complex are in appropriate spaces within Congressional buildings, including the U.S. Capitol, where they may take on-duty breaks. Off-duty troops are being housed in hotel rooms or other comfortable accommodations. 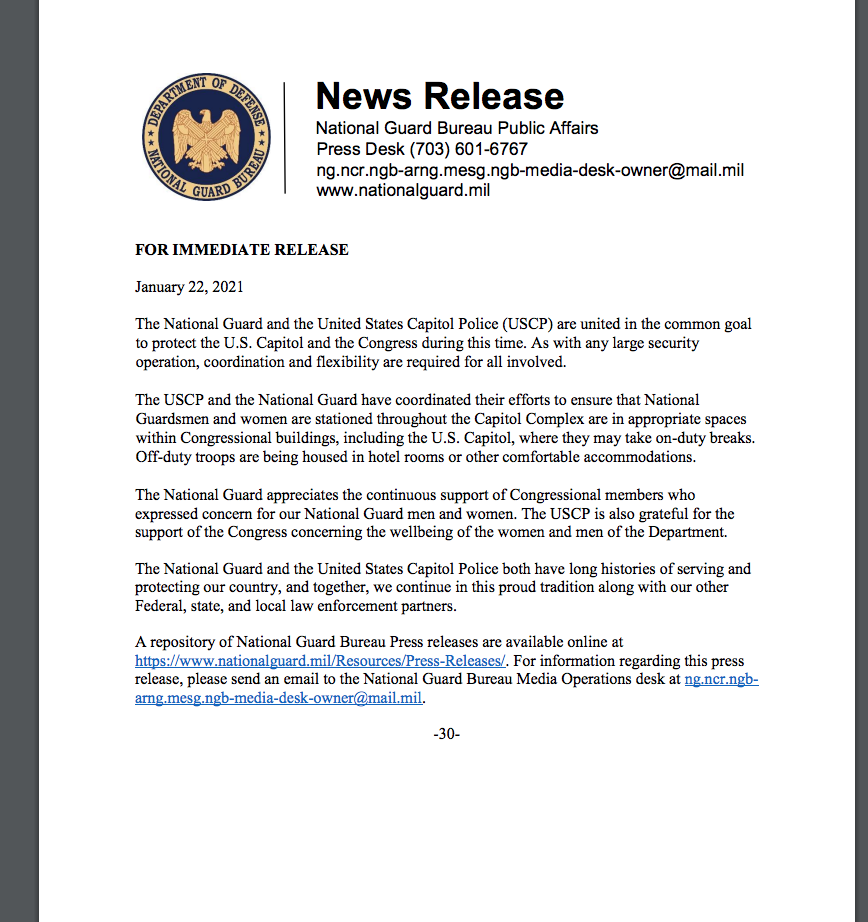 President Biden called the National Guard to apologize about the situation, according to the New York Times:

In the telephone call with Gen. Daniel R. Hokanson, the head of the National Guard Bureau, Mr. Biden apologized and asked what he could do, the officials said."

First Lady Jill Biden visited the troops on Friday, delivering chocolate cookies and thanking them for their service. "The National Guard will always hold a special place in the hearts of all the Bidens," she told the troops, according to the White House Pool report. Joe Biden's eldest son, the late Beau Biden, joined the Delaware Army National Guard in 2003 and served as a Judge Advocate General.

Lead Stories has reached out to the Trump International Hotel Washington, D.C. regarding reports that the former president had offered free rooms to Guard members.