Is President Biden about to send $3 trillion to Iran by plane to apologize for the drone strike that killed General Soleimaini last year? No, that's not true. The story was published by a liberal satire website that tries to mislead Trump supporters and Republicans into sharing made up stories that are clearly marked as satire when you actually click them. Articles from the site are frequently copied by foreign-run fake news websites. The people liking and sharing these stories are enriching foreign website operators or a liberal from Maine via the ad revenue generated with the content which is probably not what they expected or wanted.

The story appeared as an article published by America's Last Line of Defense on January 18, 2021 titled "Biden to Send $3 Trillion on Plane to Iran as Apology for Soleimani Assassination" (archived here) which opened:

Following in the footsteps of his mentor, Barak Hussein Obama, Joe Biden is preparing to cower to the Iranian Caliphate in the form of a $3 trillion apology for the Trump administration's assassination of their top General, Qassem Soleimani.

While the assassination was celebrated by democracies worldwide, Democrats in the US accused Trump of showboating, resulting in raised tensions with the Muslim country.

The continuous funneling of cash from US taxpayers to Iran between the Obama, and now Biden administrations, is shameful. While our veterans lay homeless on our streets and our corporations are being threatened with higher taxes, Democrats have decided to fund a known enemy to the US.

This is the very definition of treason. Not even bleeding heart Jimmy Carter sank so low in his dealings with Iran.

The jet, handpicked by Biden's Secretary of State Anthony Blinken, is a Dassault Falcon 8X. While the Dassault made its name in the military and commercial aircraft space, the larger Falcon jets carved out a niche in the business space due to their impressive range (5,950 nautical miles), a digital flight control system, and an ability to customize the plane's interiors into 30+ formats depending on usage priorities.

It was posted under a category named "Biden Satire For Delusional Trumpsters To Hate" on a website with numerous other satire disclaimers. This did not stop the article from going viral because (as the screenshot below shows) several people did not believe it was a joke (or they simply did not click through to the article and missed the disclaimers): 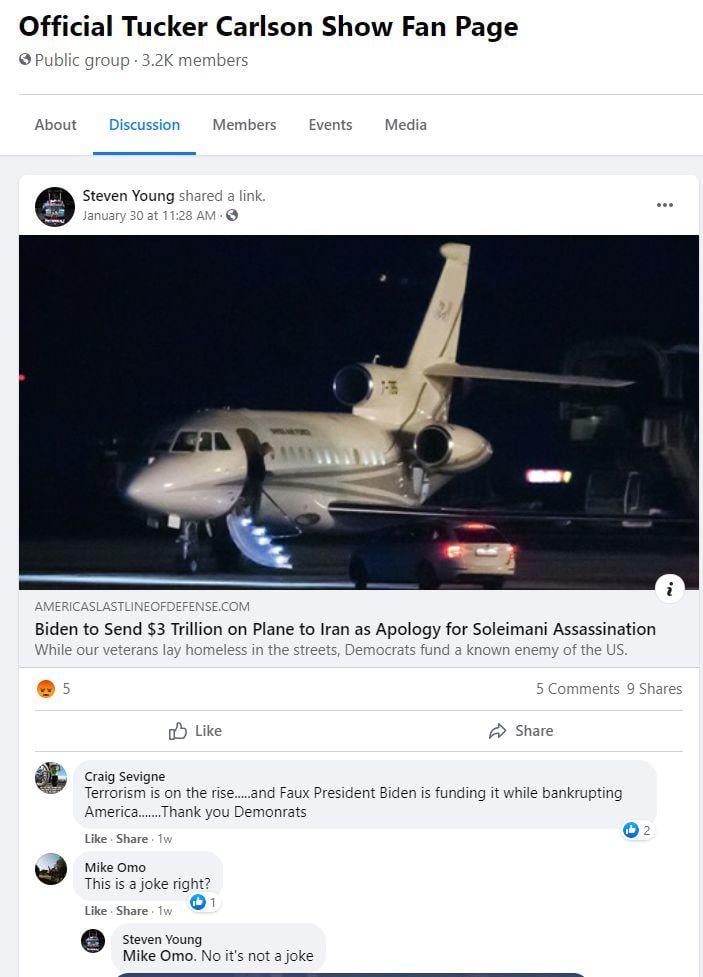 (Source: screenshot of the "Official Tucker Carlson Show Fan Page", which is not an official page but a non-verified Facebook group)

The site that published the story is part of the "America's Last Line of Defense" network of satire websites run by self-professed liberal troll Christopher Blair from Maine along with a loose confederation of friends and allies. He runs several websites and Facebook pages with visible satire disclaimers everywhere. They mostly publish made-up stories with headlines specifically created to trigger Republicans, conservatives and evangelical Christians into angrily sharing or commenting on the story on Facebook without actually reading the full article, exposing them to mockery and ridicule by fans of the sites and pages.