Did Vanity Fair feature Dr. Rachel Levine on the March 2021 cover of the magazine, and did Dr. Levine send a 'thank you' tweet to Vanity Fair expressing dreams of one day being President of the United States? No, that's not true: This photoshopped magazine cover is not real and was tweeted by a parody account on Twitter.

The fake image first surfaced as a tweet. Now a screenshot of that tweet was posted (archived here) by the Facebook page 'Kylee's Conservative Hangout' on February 4, 2021 with only the caption, 'Gross'. The text of the fake tweet from the parody account 'Dr. Rachel Levine' opened:

Thank you Vanity Fair for honoring me on the cover of your magazine this March. My dream of becoming @POTUS one day just took a step forward.

The photo used to produce the photoshopped Vanity Fair cover appeared originally in a June 9, 2015 article published by Reuters titled, "Transgender physician breaks barrier in Pennsylvania capital". Dr. Rachel Levine has served as the Pennsylvania Department of Health Secretary since 2015. She was nominated by the Biden Administration to serve as the Assistant Secretary of Health at the Department of Health and Human Services on January 19, 2021. The nomination is still waiting for the required confirmation of the Senate.

The person featured on the cover of the real Vanity Fair magazine for March 2021 is singer/songwriter Billie Eilish.

The parody account @DrRachelLevine which originally tweeted the fake Vanity Fair image has been suspended by Twitter. 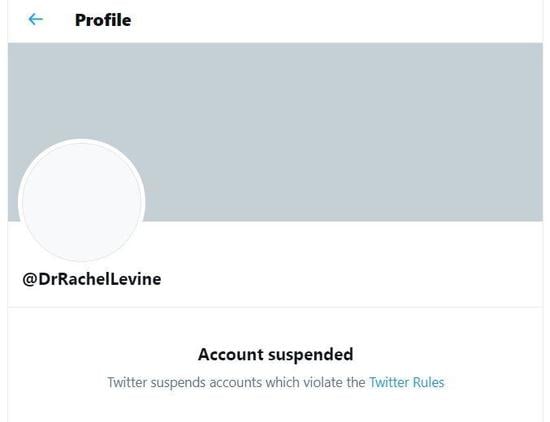