Was one of the FBI special agents killed in Florida the "top investigator for Hunter Biden's laptop"? No, there is no evidence that claim is true. Special Agent Daniel Alfin was killed on February 2, 2021, as he attempted to serve a court-ordered federal search warrant for a violent crimes against children investigation. There is no evidence that he was working on a purported investigation into a laptop allegedly belonging to Hunter Biden that was allegedly abandoned at a repair shop in Delaware. FBI Miami Special Agent in Charge George Piro noted in a press conference that Alfin "has been assigned to FBI Miami since 2017 and has worked crimes against children violations for over six years."

The claim appeared as a post (archived here) published on Facebook on February 2, 2021 by Robert Heim. It opened:

Guess who was the top investigator for Hunter Biden's laptop?

The caption next to a screengrab from Fox News showing a body being loaded into an ambulance read:

Guess who was the top investigator for Hunter Biden's laptop? 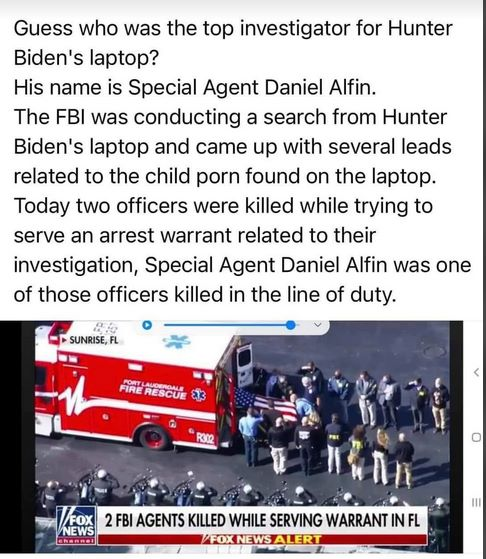 The post cites no source -- official or unofficial -- or any other basis for the claim.

The FBI responded via email to Lead Stories on February 4, 2021, directing us to Agent Piro's remarks at a press conference two days earlier regarding Alfin. Piro noted details on the late agent's biography:

Dan Alfin was 36 years old. He was born in New York and joined the FBI in 2009 with his initial assignment to the FBI's Albany, New York, office. He has been assigned to FBI Miami since 2017 and has worked crimes against children violations for over six years. He is survived by his wife and one child."

There is no evidence Agent Alfin was associated with any investigation into Hunter Biden and a laptop, but such an investigation would likely be based in the Wilmington, Delaware office of the FBI, more than 1,000 miles north of Miami. There are several FBI field offices between Delaware and Miami.

Lead Stories conducted a Google search for any pages mentioning "Daniel Alfin" within 30 words of "Hunter Biden" that were in existence before February 3, 2021 and came up empty. We also checked Twitter for any mentions of Alfin in connection with Hunter Biden and found none that pre-dated February 2, 2021.

The New York Post reported in October 2020 that Hunter Biden left his laptop at a repair shop in Delaware in April 2019, and the owner found incriminating emails, including evidence of the son's drug problems and alleged sex acts on it before notifying the authorities and a lawyer for Trump adviser Rudy Giuliani.

Hunter Biden has never confirmed the existence of a laptop or whether it was left in a Delaware repair shop or if it was in possession of the FBI. The Justice Department has not made available any documents that would confirm it is investigating the laptop.

Lead Stories has debunked several claims about Hunter Biden, the purported laptop and claims there is an investigation into Biden laptop contents. You can see those stories here, here and here.

Hunter Biden announced in December 2020 that he is under investigation for tax issues but mentioned nothing further. CNN reported he released a statement:

I learned yesterday for the first time that the U.S. Attorney's Office in Delaware advised my legal counsel, also yesterday, that they are investigating my tax affairs. I take this matter very seriously but I am confident that a professional and objective review of these matters will demonstrate that I handled my affairs legally and appropriately, including with the benefit of professional tax advisors."