Does this photo show a polar bear roaming the streets of a neighborhood in the United States? No, that's not true: The photo is of a polar bear walking the streets of Longyearbyen, Norway. An article on icepeople.net from January 1, 2020, says that the authorities fatally shot the bear after it repeatedly ventured into populated areas, posing "a danger to people in the city."

The claim appeared in a Facebook post (archived here) published February 15, 2021, with the photo of the polar bear and this caption:

In an earlier version of the Facebook post, the photo of the polar bear also included this sentence:

My boy just sent me this, on Silverleaf in glen oaks. [The sentence was followed by a rolling-on-the-floor-laughing emoji.] 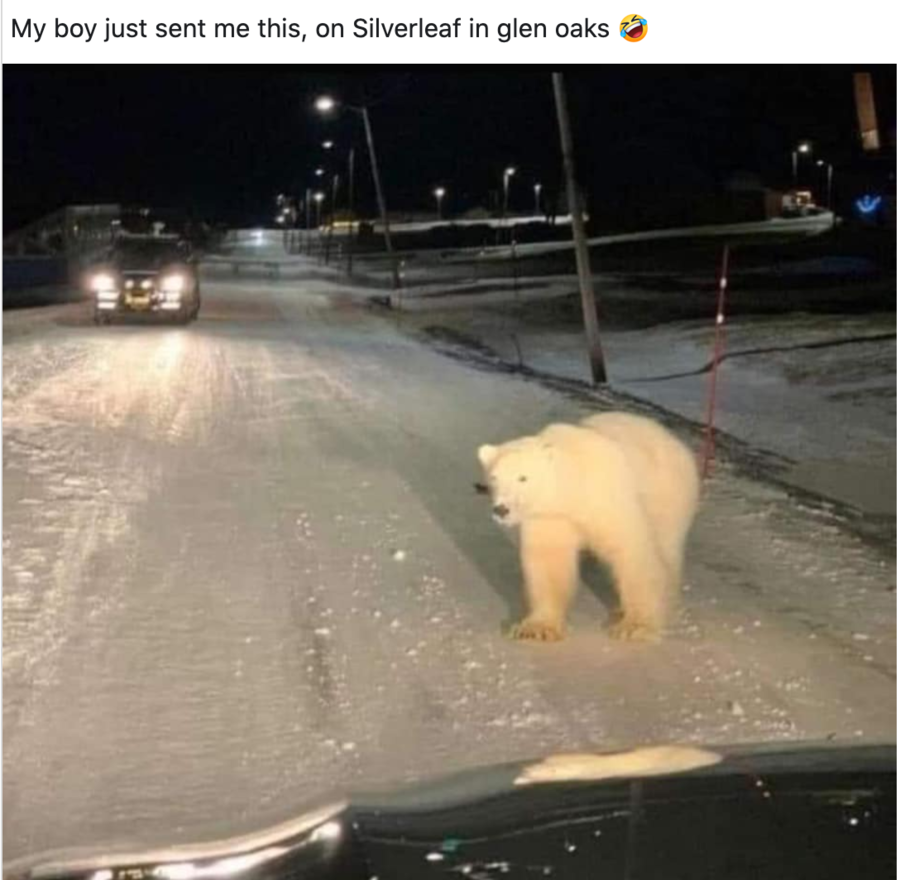 The rolling-on-the-floor-laughing emoji is one giveaway that the post is a tongue-in-cheek commentary on unusually cold, wintry weather in much of the United States. mid-February of 2021. And the fact that at least one poster is based in Louisiana, which rarely gets snow, is another clue. During the week of February 15, 2021, there was snowfall in some parts of Louisiana. A photo gallery posted on wgno.com shows some of the excitement generated by the unusual weather:

Temperatures in the teens and rain in the forecast can only mean one thing... snow in Louisiana!

Even if it doesn't stick, a down-south-snow-day is rare and Louisianans never need an excuse to celebrate.

In Norway, snow is ho-hum. But a polar bear roaming in parts of a city gets attention. The polar bear wandered into Longyearbyen, which is on Spitsbergen Island, in the country's Svalbard archipelago. A January 2020 article on icepeople.net explains why the animal raised concern:

A polar bear that visited Longyearbyen four times since last Thursday, including minutes after midnight on New Year's, was shot and killed by officials a few hours after the last approach because there was no other practical alternative to protect people in town, according to The Governor of Svalbard.

The bear, a seven-year-old male, was killed at 4 a.m. at Hanaskogdalen, where it had been chased after venturing from Adventdalen to the snowmobile dealerships at the east edge of town as the New Year's Day fireworks were just being launched. Officials ultimately chased it across a cabin area across the channel, ending up between Revneset and Hanaskogdalen.

"The polar bear was killed, not because of an emergency situation, but in recent days this bear has shown repeated and very persistent approaches towards Longyearbyen settlement and therefore poses a danger to people in the city," Gov. Kjerstin Askholt said in a prepared statement. "We have made many attempts to solve the situation in ways other than killing the bear, but without success...This is the time of year when it is completely dark all day and we have very poor overview. We do not have the manpower resources to look after the population 24 hours a day."