Have all the nations of the world agreed to abandon the current global financial system and adopt one that will back currencies with gold and offer instantaneous transactions? No, that's not true: There is no verifiable record anywhere that the "Quantum Financial System" (QFS) exists, much less that it has been adopted globally. One of the most vocal QFS proponents is a highly visible British QAnon supporter who has espoused disproven and baseless conspiracy theories about COVID-19 and former President Donald Trump.

The claim, which has appeared numerous times on social media, also was made in a video on BitChute on March 19, 2021 titled "Charlie Ward Discusses QFS Iraqi Dinar with Nicholas Veniamin" (archived here).

The Quantum Financial System (QFS) is a theoretical construct that would replace the current global system in which each country issues its own currency and international transactions are mostly handled through the Society For Worldwide Interbank Financial Telecommunication, a legitimate organization commonly known as SWIFT.

QFS also would replace what is known as fiat currency, which investopedia.com defines as "government-issued currency that is not backed by a physical commodity, such as gold or silver ... Most modern paper currencies are fiat currencies, including the U.S. dollar, the euro, and other major global currencies."

Money according to QFS boosters, would be backed by a hard commodity such as gold. And due to the potential power and speed of the emerging field of quantum computing, all transactions would be accounted for instantaneously. (You can read more about quantum computing here.)

Some financial institutions are interested in quantum computing, but it has nothing to do with QFS. They want, instead, to use the new technology for instantaneous analysis, not to transfer money nor become part of the fictional global financial system based on gold-backed currencies.

As the Financial Times reported on January 6, 2020, Goldman Sachs, JPMorgan and Citigroup are charging forward:

The potential for the technology to revolutionise activities like risk management and trading are so great that banks need to start learning how to harness it now, said William Hartnett, a managing director at Citi. ...

Besides boosting their computing resources, the banks hope quantum machines will greatly reduce the time it takes to analyse complex risk positions, making it possible to adjust on the fly rather than relying on an overnight calculation.

For a detailed and complex analysis of the current global financial system and the "financial reset" that is a central tenet of QFS, go here.

Some entities insist, however, that quantum computing and the quantum financial system are already in place, although they offer no evidence of it.

For example, Foster Swiss, which identifies itself as an international private banking consultant based in Madrid; Barcelona, Spain, and Geneva, said in a December 2, 2020, posting on its website that QFS already has been developed:

A system whose purpose is, replace central banking [and] cover the new global network for the transfer of gold or asset-backed money, initiated by Russia and China to replace the Swift system, controlled by the United States.

Foster Swiss offers no independent confirmation of such a system, nor links to demonstrations or users of it.

And Foster Swiss refers to a purported global entity called GESARA, which does not exist.

Any country that does not comply with the Global Economic Security and Reform Act (GESARA) is excluded from the QFS and will eventually be left out of international trade. Each country must comply with GESARA to participate in the QFS.

Lead Stories proved in a March 29, 2021, report that GESARA and its companion National Economic Security and Recovery Act (NESARA) are nonexistent entities often used to scam money from unwitting believers.

The Quantum Financial System that Foster Swiss and British QAnon leader Charlie Ward promise in the video and elsewhere is far from a reality, now or anytime soon. And several of the claims Ward makes about QFS are simply not true.

For example, Ward says in this video:

The system I will describe below has been agreed upon by all 209 countries of the world, along with GESARA. It's called the Quantum Financial System.

Not only is it not true that 209 nations have agreed to switch to QFS, but GESARA does not exist.

Ward also says in the video:

In the QFS, there exists, not just a pile of gold in each country to back their national currency, but an actual Bullion Exchange Bank Vault of gold that has been set apart, identified, and secured for the purposes of backing every currency in every nation who are GESARA compliant.

Although individual agencies such as the Federal Reserve Bank of New York have their own large gold vaults, there are no documented records of a Bullion Exchange Bank Vault of gold existing anywhere nor of gold in those countries being identified and secured for GFS. And, as already noted, GESARA does not exist.

Ward also discusses the global currency reset that is supposed to happen under QFS:

The Global Currency reset (GCR) takes place at the same time as the activation of QFS. This resets all currencies of the world to a gold-backed system that's on par value with all the others. It's a major change but one that has to take place. All digital Gold Certificates represent an increment of currency. The certificates are all equal regardless of the currency. This means that there will never again be manipulation of currencies by one individual nation.

Ward attributes the written material that he reads in the slide presentation on the video to "Steven Leonard Quantum Financial System -- Chief Scientist."

There are three issues with that:

Someone going by the name Ron Giles has posted online several times about QFS and currency markets and similar financial topics, but nothing else. Lead Stories could not find an image of him, even when he appeared on a YouTube video blog. 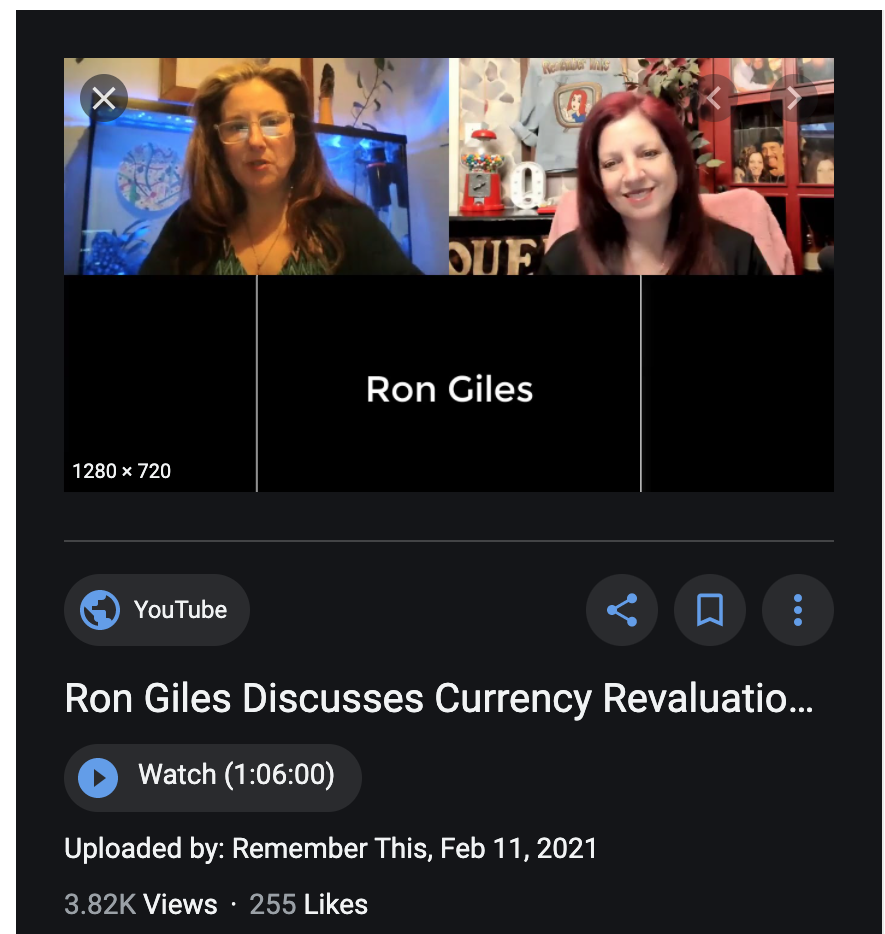 Some proponents point to congressional creation of the National Quantum Initiative Act on December 21, 2018, as proof that QFS exists. But the Quantum National Initiative does not deal with financial systems or institutions. Instead, the agency says on its website, its purpose is to "ensure the continued leadership of the United States in quantum information science and its technology applications."

The 2018 law launched the National Quantum Coordination Office, which oversees the research efforts of 13 federal agencies and offices, including NASA, the Department of Homeland Security, the National Security Agency, the Justice Department and the Defense Department.

None of them have anything to do with the QSF. A brief listing of what each agency is involved with can be found here.

The National Quantum Coordination Office had not, at the time this was written, answered an April 11, 2021, written request from Lead Stories for comment about QSF.

SWIFT, the Society For Worldwide Interbank Financial Telecommunication that QFS proponents say the new system will replace, also did not answer an April 11, 2021 email asking for comment. A representative for the public relations agency for SWIFT told Lead Stories in an April 12, 2021 telephone interview that he would reach out to the agency but doubted they would comment. He said he would email an answer, but had not as of April 13, 2021.

Ward, the loudest proponent for QSF, is one of the best-known QAnon mouthpieces in Britain. The Hope Not Hate organization said in an October 22, 2020, online report that:

While there are many minor British figures promoting QAnon online, only two have achieved popularity to rival their US counterparts: Martin Geddes and Charlie Ward.

U.S. government officials have already tied one scam to proponents of QSF.

The U.S. Office of the Comptroller of the Currency sent out an alert on June 22, 2020, that said people had reported getting fake emails about funds the agency was holding. The scam email, dated June 16, 2020, referenced QSF:

In preparation for the Global Currency Reset and arrival of the Quantum Financial System currently running parallel, any i nternationalfinancial activity, regulated by their respective agencies, must strictly comply with no tolerance to all protocol and regulations stipulated in the International Quantum Initiative Act.