Was Joe Biden rushed to the hospital April 5, 2021? No, that's not true. Joe Biden had not been hospitalized in days leading up to and including April 5, 2021. He spent Easter Sunday at Camp David, as a photo on his daughter Ashley Biden's Instagram account showed. There is a video of Biden returning to the White House on Monday, April 5, 2021, posted by C-SPAN. An email obtained by Lead Stories from the White House Press Pool confirms his arrival in person. The video posted with the claim, showing reporters rushing outside the White House, is recycled tape from pre-COVID-19 days as the reporters are not wearing masks, a rule that Biden instituted on his first day in office. The weather in the video is also dark and cloudy, while the weather in Washington, D.C., on Easter Sunday was bright and sunny.

The claim appeared as a video published on BitChute.com on April 5, 2021, titled "Biden Rushed to the Hospital, Lid on Media" (archived here) which opened:

Biden Rushed to the Hospital, Lid on Media

The posted video contains a video Robert Petrosian posted on Twitter on April 4, 2021.

As he told us, for some reason the news should not be leaked, but by private medical staff, Mr. Biden is ready to be taken to the hospital.!!
(This video is related to 20:34 PM)#usa #American #BidenHarris #trump2024 #Reporter pic.twitter.com/07svU6f1B1

There is no evidence this is a current video. The caption on the video published on Bitchute.com on April 5, 2021, claims, "Footage broadcast live from White House photographer appx 2.5 hours ago."

The video posted on Bitchute appears to be from a QAnon account. 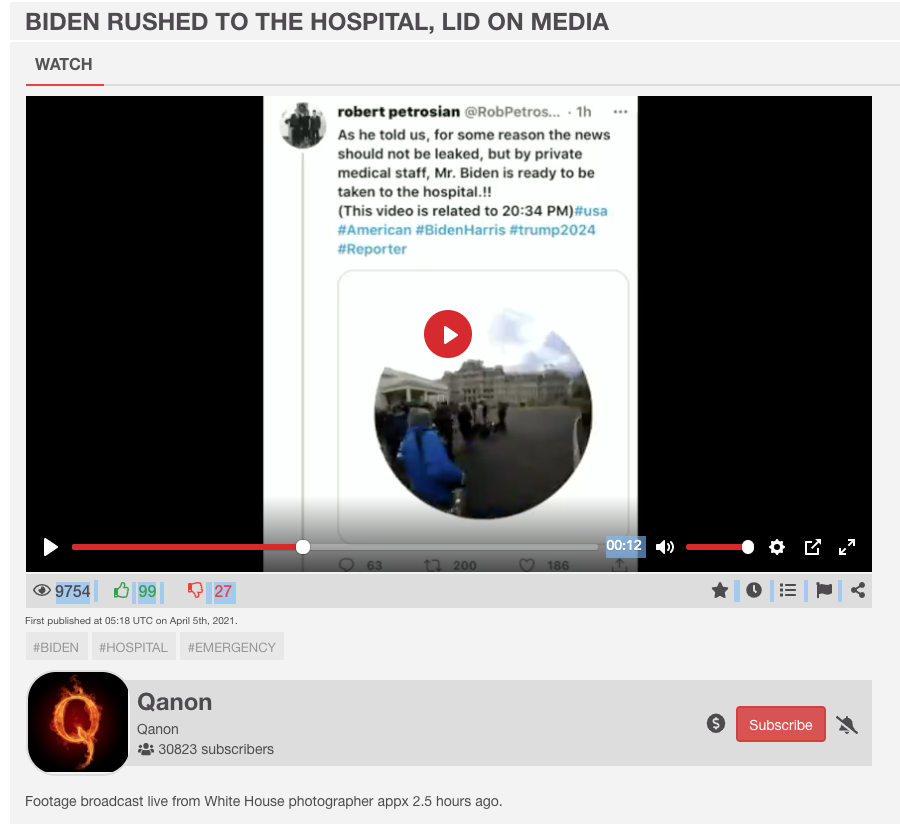 The temperature in Washington, D.C. on April 4, 2021, was 72 degrees and sunny, as NBC Washington reported. The reporters in the video are wearing heavy winter coats.

The post on April 5, 2021, on BitChute claimed Biden WAS rushed to the hospital while the April 4, 2021, tweet claimed "private medical staff" said "Mr. Biden is ready to be taken to the hospital." There is no proof for either claim.

Lead Stories has viewed the photo Ashley Biden posted on her private Instagram account with her dad at Camp David on Sunday, April 4, 2021.

President Biden returned to the White House on Monday, April 5, 2021, per an email obtained by Lead Stories.

Marine One touched down on wide flat lawn of the Ellipse at 11:41 am.

"Everybody else in the rest of the world is investing in infrastructure and we're going to do it here."

Biden answered a question about the corporate tax rate and defended his position on raising it. He spoke for about 2 or 3 minutes then turned and stepped into the black limousine behind him.

It was hard to hear over the helicopter noise. Will send more fuller quotes soonest.

From the White House press office --
Returning with the President:

Joe and Jill Biden appeared at the White House with the Easter Bunny on April 5, 2021, multiple news outlets reported.