Did Jeff Bezos agree to pay for a six and a half mile long bridge in Maryland in exchange for the rezoning of some land to build an Amazon distribution center and drone launching facility? No, that's not true: A short film produced by Queen Anne's County Television was an April Fools' hoax. The video began with elements typically found in a real news broadcast including an enthusiastic pitch in favor of the project by the Queen Anne's County Commissioner but as the satirical news segment progressed, the narrative became increasingly outrageous and silly, and finished with an April Fools' announcement.

The short film was presented in a post (archived here) where it was published by 'Queen Anne's County Television - QACTV' on April 1, 2021. It was captioned:

This short satire film had several elements of an authentic local news segment, including smooth camera work and editing, stills of maps and B-roll footage of construction sites. The story includes specific details for the local Maryland audience which add to the believability, the irony, and possibly some momentary outrage before the viewer picks up on the joke. A key element of the satirical news story is the appearance of Jeff Bezos himself. Clips from a 2013 Hanson Hosein 'Four Peaks' interview with Bezos in Seattle have been spliced to fit into a new context for this Maryland Bridge project joke. 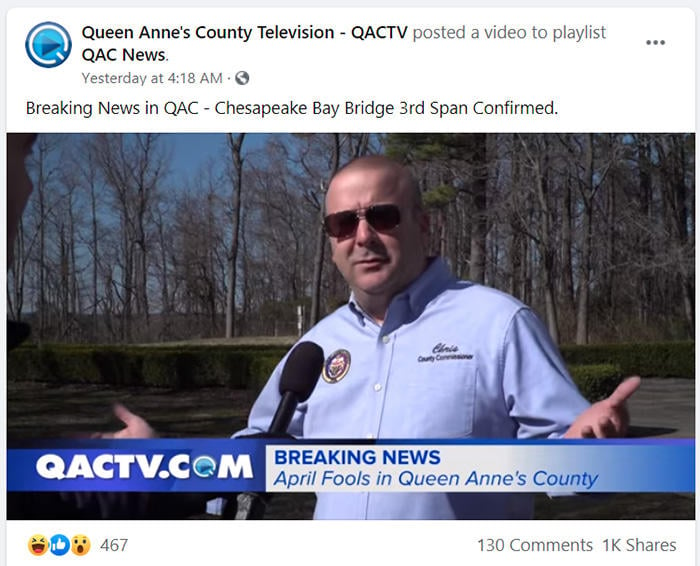 Anybody who has watched this whole newsbreak and believes what I am saying, has got to be an April Fool.
Folks, We know that the bridge is a very serious topic and it is something that we are going to have discussions on for years to come- but we thought, 'Why not have a little levity on April Fools Day?"