Does this video show that NASA published a war document on its website in 2001 titled, "The Future is Now," which details a global plan to attack, take over the world, and phase out human beings by 2025? No, that's not true: This is a short clip of a longer video interview with Deborah Tavares filmed in 2013 at Conspiracy Con. She is misrepresenting a PowerPoint document that was part of an oral presentation by NASA scientist Dennis Bushnell, which was given at a 2001 defense industry symposium. The lecture was not detailing plans by NASA to attack the world -- rather, it was a lecture geared for defense industry professionals, predicting or imagining how warfare might evolve and how defense tactics might rise to meet evolving threats in the future.

The claims have been circulating online since 2013 and resurfaced in a video published on Instagram by rab.bit.777 on June 17, 2021. Captioning added to the video reads:

REAL PLANS FOR WORLD DOMINATION
END OF THE WORLD = 2025 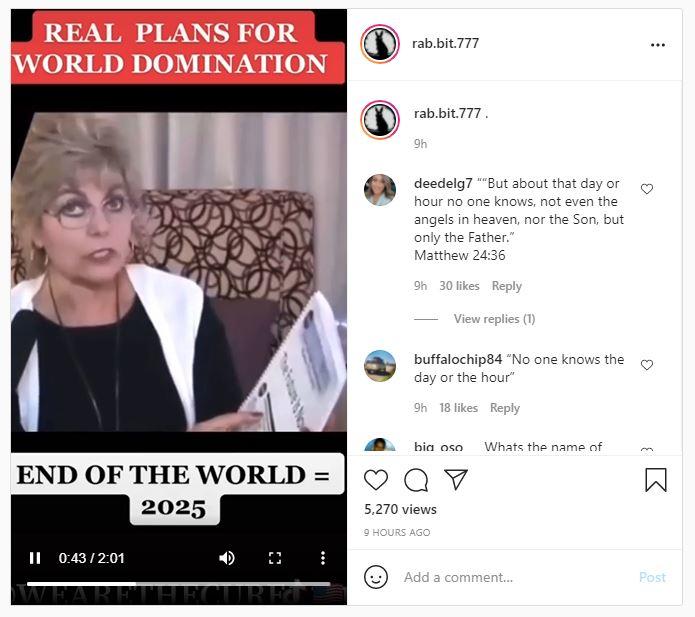 The full interview with Deborah Tavares is over a half-hour long and was made by actor Trevor Coppola for Anthony J. Hilder. It was posted on Hilder's YouTube channel (here) on July 23, 2013. The video was filmed at Conspiracy Con 2013, which was held over the weekend of June 1-2 that year in Milpitas, California. In the video Tavares holds a spiral bound printout of the document she claims was on the NASA website. The front cover of the bound booklet includes the title, "The Future Is Now!" with notations highlighting specific pages of the PowerPoint demonstration. This cover appears to have been added by Tavares and was not part of the original Bushnell document. A copy of the document with the added cover page is hosted on Tavares' website stopthecrime.net.

"The Future Is Now" is a catchphrase that has been used by NASA, but Lead Stories could find no evidence that the phrase was used by Bushnell in association with this PowerPoint lecture.

Lead Stories was unable to find any proof that the document was ever published on NASA's website as claimed by Tavares. It should be noted that anyone can request for the Internet Archive to save a copy of any webpage that is openly available on the internet, free of charge. Web.archive.org will create a publicly available record of how a specific website appeared on a given date. There is a copy of Bushnell's original PowerPoint document dated July 1, 2001, in the Internet Archive. This was saved, not from NASA's website, but from the Defense Technical Information Center's DTIC.mil website on December 24, 2003. Another archived document from the DTIC.mil website provides the context for the Bushnell PowerPoint, it is the session schedule for: "The 4th Annual Testing and Training for Readiness Symposium & Exhibition: Emerging Challenges, Opportunities and Requirements." This symposium, hosted by DTIC and National Defense Industrial Association (NDIA), took place in Orlando, Florida from August 13-16, 2001. Along with the name and credentials of each of the 22 speakers listed in the session schedule is the title of each lecture linking to the materials that go along with it. The lecture in question is titled, "Training and Testing for Future Strategic Issues/Future Warfare [CIRCA 2025] by Dennis M. Bushnell, NASA Langley Research Center" and is linked to the 113 slide PowerPoint presentation.

Tavares has misrepresented this NASA scientist's "Future Strategic Issues" lecture as if it is a "NASA War Document." She has added her own doomsday interpretation to the bullet points of the slides about building U.S. defenses, and baselessly layered on many other conspiracies onto these slides that are missing the context of the accompanying live lecture. In the uncut version of the interview, Tavares explains why this "war document" would be published where the public could see it:

Because the Illuminati, the most wealthy rich men on the face of the planet, always telegraph everything that they're going to do.

Forty-two seconds into this shortened video (five minutes into the full interview) Tavares lists, "some of the agencies involved" -- these are agencies that Bushnell had credited in slide #3, that NASA had done "Futures" work, with them or for them. She also introduces the concept that the United States is no longer a country but is a corporation called USA inc. Lead Stories has written about the false rumors that the United States is a corporation in the past (here and here); these spring from a misrepresentation or misunderstanding of the meaning of the word incorporate.

Lead Stories reached out by email to NASA's Langley Research Center for comment and will update this article if appropriate if we receive a reply.