The claim is that if a snake is swimming on top of the water it is venomous and if it is submerged with just its head above water as it swims it is nonvenomous. "It's not a rule and there are of course many exceptions," wildlife scientist and conservation biologist David Steen told Lead Stories. 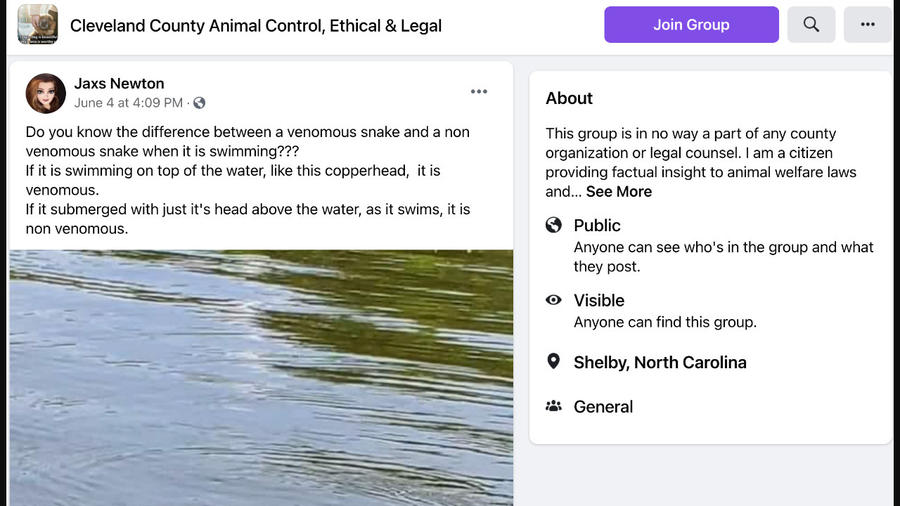 The claim cited a photograph of a copperhead swimming above the water:

Steen explained in a June 10, 2021, email why swimming methods are not the only rule to follow in determining whether or not a snake is venomous:

It's a tip that's based on some general patterns. So it can be helpful when trying to identify a snake but it's not a rule and there are of course many exceptions.

He said there wasn't a tried-and-true method for identifying venomous or nonvenomous snakes by swimming:

There aren't any snakes that exclusively do one or the other. Pit vipers generally seem to float on top, but not always. For example cottonmouths will also swim under the water.

Steen dedicated a chapter in his book, "Secrets of Snakes: The Science Beyond the Myths," to the topic:

The story goes that harmless snakes generally swim underwater with only their heads poking out, while venomous snakes swim on top of the water, with perhaps only their bellies submerged. In reality, it is not that simple.

Many pitvipers swim. Cottonmouths live in streams and swamps, so they swim all the time. Eastern diamond-backed rattlesnakes (Crotalus adamanteus) live primarily on land, but sometimes they swim too; they've even been found in the ocean. I have only heard of the eastern diamond-backed rattlesnake swimming across the water in one way: by filling its lung (snakes have only one) with air to increase buoyancy and crossing the water with much of its body staying dry. Cottonmouths can do this too, but they also swim underwater, sometimes completely submerged while they look for things to eat and sometimes with just their head poking out of the water to look around.

Harry Greene, emeritus professor of ecology and evolutionary biology at Cornell University, told USA Today that the behavior of venomous snakes swimming on top of the water was known to apply to snakes in the eastern region of the United States:

He said species of venomous snakes common in eastern states -- copperheads, cottonmouths and larger rattlesnakes -- swim with their entire bodies afloat, while non-venomous snakes, including water snakes, garter snakes, and ribbon snakes, keep only their heads afloat as they swim. In other regions, swimming above water is either not a telltale sign that a snake is venomous, or it is not known, he said.