Did a Facebook post about the July 2021 protests in Cuba include a picture of said protests? No, that's not true: the image was taken 6,000 miles away, a decade earlier: it shows protests in Egypt in 2011.

The claim originated from the caption under a photo in a Facebook post (archived here) where it was published on July 12, 2021. It opened:

Massive protests erupt in Cuba over their government run socialized medical system & communism! It's being compared to the Egyptian protest in 2011.

The author of this Facebook post was correct that there have been protests in Cuba against the country's communist government, but the caption suggests the protests shown are in Cuba when the photo is of protests in Egypt a decade earlier.

A reverse image search of the photo in the post led Lead Stories to articles about the 2011 protests in Egypt. A similar photo was seen on RadioFreeEurope RadioLiberty's website as number 14 in a 16-photo article. It was captioned, "Antigovernment protesters march in the coastal city of Alexandria on February 11."

The exact image can be seen on a Slovenian website named DNEVNIK 70LET. The image on the site is zoomed in and cropped compared to the one in the Facebook post, but the protesters are waving the Egyptian flag (three horizontal stripes of red, white and black) and not the Cuban flag (five blue stripes on a field of white with a red equilateral triangle overlay on the left third). Exact matches between the photos are clear: boulders below the curving sea wall, light poles and building facades.

This is what the photo looked like on DNEVNIK 70LET at the time of writing: 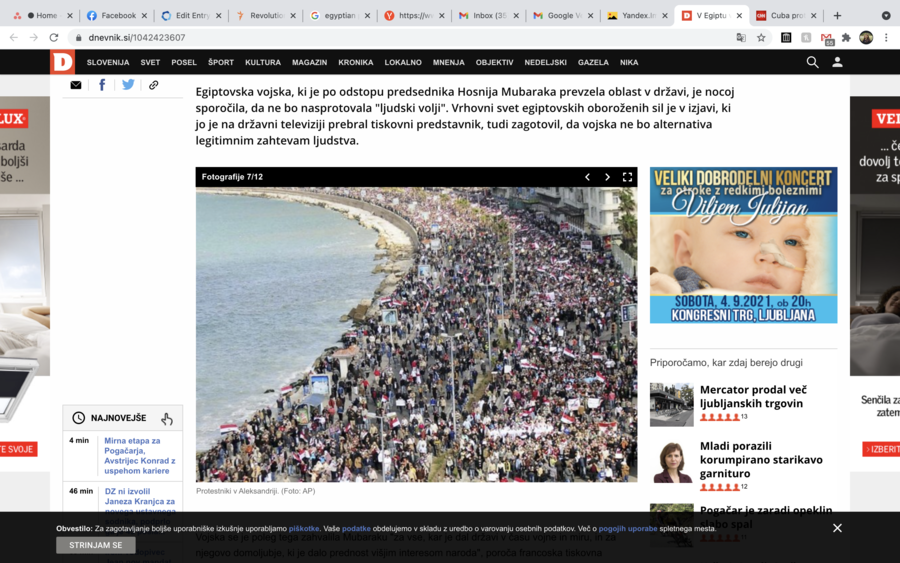