Does a Public Health England report on COVID variants show the case fatality rate for the SARS-CoV-2 Delta variant is .08 percent and that, compared to the virus that started the pandemic, Delta is not as lethal? No, that's not true: The report a radio host linked to clearly says the proportion of patients who will die of infection with the Delta variant is .2 percent of cases, which 2.5 times higher than what the host declared. The report he offered as support for his claim also says comparisons of the fatality rates of the variants are invalid because each variant arises at different stages of the pandemic, making it an apples-to-oranges juxtaposition.

The claim originated in a Facebook video (archived here) published July 12, 2021, on the Dan Bongino Show Facebook page under the title "The Fakebook communists, and a clownish 'fact-checker' named Ruben Portela Carballeira, are at war with the truth about covid." He opened, at 39 seconds into the video, with:

The Delta Variant has a case fatality rate of 0.08 percent...and they are losing their minds, including that clownish fact checker at that loser site, Health Feedback...Rubén Portela Carballeira, who obviously can't read basic statistics...

In the first comment on his Facebook post, Bongino linked to the Public Health England report as proof of his assertion that the case fatality rate (CFR) is "0.08" for the Delta variant of SARS-CoV-2. Here is how he linked to the report:

But the statistical charts in that report clearly show the case fatality rate is not what the radio host says it is.

Below is the relevant chart from the Public Health England report he linked to. Lead Stories placed a thin gray screen and a red arrow on the chart to assist readers in quickly finding the Delta variant case fatality rate, which is not 0.08%. It is .2% 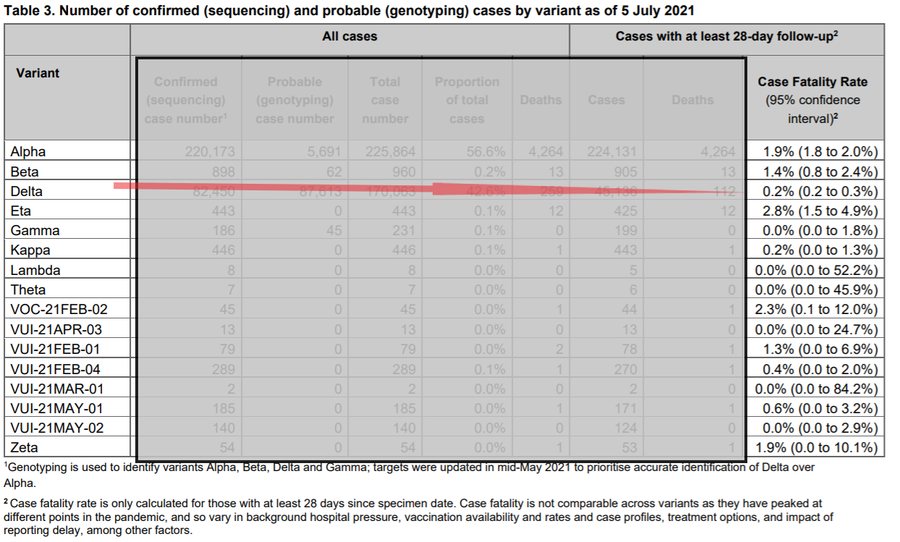 Also visible in the screen shot is footnote number 2, in which England's public health experts note why comparisons of the variants' Case Fatality Rates is invalid:

Case fatality is not comparable across variants as they have peaked at different points in the pandemic, and so vary in background hospital pressure, vaccination availability and rates and case profiles, treatment options and impact of reporting delay, among other factors.

In the year since the World Health Organization declared the continent-hopping ancestral form of the virus a pandemic, more than 45 million Britons have been vaccinated and 5 million infected, making them far less susceptible to serious COVID symptoms by the time the Delta variant began to rapidly spread. About 128,000 Britons have died of COVID-19. If they had avoided the ancestral form and instead been infected by the Delta variant, its CFR would be affected, but if they survived with the new treatments available, it would also have affected the Delta variant's CFR. Hence Public Health England's caution about comparisons.

The "Edit History" on Bongino's post (in screenshot following this sentence) shows someone updated the link in his "FACTS are stubborn things" comment to send readers to a different Public Health England report on variants, but it does not support his statement, either. 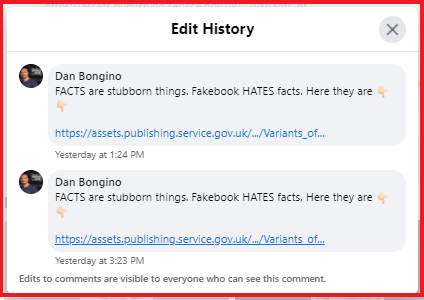 Neither of the versions of the Public Health England variant report supports Bongino's "FACTS are stubborn things" comment.

When the link in Bongino's comment was updated to the July 9, 2021 version of the report on variants, the chart on page 11 shows new data had driven the case fatality rate up to .2 percent, which is 2.5 times the lethality Bongino declared.

Lead Stories searched the reports for the origin of the .08 statistic Bongino used.

The only place it appears is in a chart unrelated to case fatality rates. It is on page 25 of the June report and it is the growth rate for the Eta variant of SARS-CoV-2, not the Delta Variant. The following screengrab has been overlaid with highlighting and a red arrow to assist readers in finding the statistic. 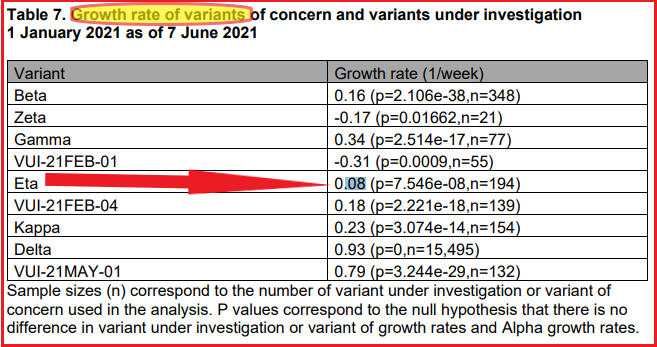