Did 39 school bus drivers and monitors from School District 308 quit their jobs in defiance of a vaccine mandate on September 21, 2021? No, that's not true: Thirty percent of the district's school bus drivers did call in sick in the early morning hours of Tuesday, September 21, 2021 -- but there were no bus driver resignations. Classes in some of the district's schools were conducted remotely that day. The bus drivers' union, the Oswego Transportation Association, has refrained from making a comment about the situation.

The claim originated with a tweet by @leslibless on September 22, 2021, and has been reproduced as a screenshot on other platforms such as this post on Facebook where it was published on September 25, 2021 by the page "Christian, Conservative, Patriot and Not Afraid" with the caption, "We need to show support for these bold soldiers for Liberty! ~Patria" The text of the original tweet reads:

Lead Stories reached out by email on September 28, 2021, to Theresa Komitas, director of communications and public relations of School District 308 in Oswego, Illinois, to find out what happened with the bus drivers on September 21, and in the week since. She responded soon after:

There were no resignations, all drivers resumed normal operations the following day. There was no specific reason or group comment made by the drivers, each individually followed the proper protocols for calling in sick that one day. The union made no comment.
The absence that one day accounted for 30% of our drivers.

On the morning of September 21, 2021, an urgent message was posted to the Community Unit School District 308 Facebook page that detailed how the schools in the district would be conducting classes that day:

URGENT MESSAGE FOR TUES. SEPT 21:
Due to a large number of bus driver absences today, we cannot accommodate transportation for all students. For this reason, the schedule for classes will be the following for today (9/21) 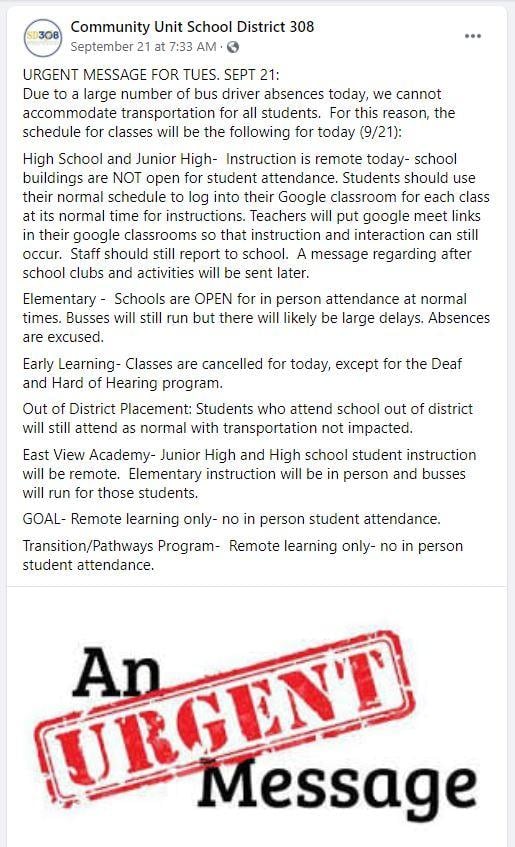 (Image source: Facebook screenshot taken on Tue Sep 28 17:23:00 2021 UTC)
llinois Gov. J.B. Pritzker has issued a vaccine mandate that includes school employees, but ABC7chicago.com quoted the Oswego school district as saying bus drivers were not required to show proof of vaccination or submit to a testing regiment at the time of the driver shortage.
A September 28, 2021, article with audio from wspynews.com titled, "Oswego 308 Hopes to Avoid Repeat of Recent Bus Drivers' Incident" discussed a memorandum of understanding between the school district and the Oswego Transportation Association union. This includes a retention bonus to ensure drivers stay with the district as well as a referral bonus and a signing bonus to bring in additional drivers. In a recording included in the article, the superintendent explains that this was in the works and not related to some of the bus drivers calling in sick days on Tuesday September 21.

Using a memorandum of understanding or MOU in the contract with the Oswego Transportation Association union or OTA, the Oswego 308 Board of Education unanimously approved a contract provision Monday night.

After the 308 board meeting, District School Superintendent Dr. John Sparlin said that the MOU was not a result of some bus drivers not reporting to work and calling off work starting around 4 a.m. last Tuesday.