Is it illegal to scream an expletive about U.S. President Joe Biden? No, that's not true: According to First Amendment law experts, such an action would most likely not result in legal consequences and Supreme Court precedent protects most such expressions.

The claim originally appeared in an Instagram post (archived here), and published on September 14, 2021. The meme appeared to be a screenshot of an article's headline, which read:

It's Not Just Dangerous; Screaming F*** Biden May Also Be Illegal. Experts warn that in addition to the violent incitement caused by screaming expletives at the President, such threats may also be criminal. 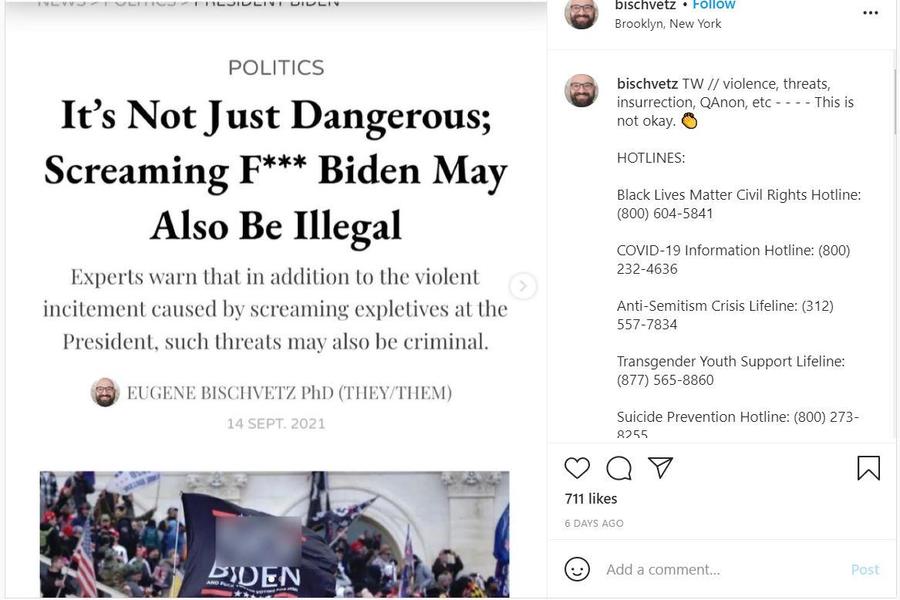 Lead Stories conducted a Google search of the article's headline and only found results from iFunny, a meme website, indicating that the article likely did not run on a news website and was not real.

According to an overview by the Legal Information Institute about freedom of speech/freedom of the press in the First Amendment:

The right to freedom of speech allows individuals to express themselves without government interference or regulation. The Supreme Court requires the government to provide substantial justification for the interference with the right of free speech where it attempts to regulate the content of the speech. Generally, a person cannot be held liable, either criminally or civilly for anything written or spoken about a person or topic, so long as it is truthful or based on an honest opinion and such statements.

A less stringent test is applied for content-neutral legislation. The Supreme Court has also recognized that the government may prohibit some speech that may cause a breach of the peace or cause violence. For more on unprotected and less protected categories of speech see advocacy of illegal action, fighting words, commercial speech and obscenity. The right to free speech includes other mediums of expression that communicate a message. The level of protection speech receives also depends on the forum in which it takes place.

Because of the First Amendment's multifaceted nature, Lead Stories reached out to several First Amendment law experts who weighed in on the claim made in the Facebook post. In an email to Lead Stories on September 20, 2021, Aaron Madrid Aksoz, a communications associate for the American Civil Liberties Union (ACLU), described the claim as "almost certainly false," adding:

Illegal implies a law banning such speech, which would be a direct violation of the First Amendment, which forbids government censorship of speech.

Aksoz referred us to a case similar to the scenario described in the post. According to Aksoz, a New Jersey woman who was represented by the ACLU "was cited for violating a New Jersey town's obscenity ordinance after displaying a yard sign with a similar message, and after the ACLU got involved a court vacated the charges."

In a phone call with Lead Stories on September 20, 2021, Kevin Goldberg, the First Amendment specialist at the Freedom Forum, said:

However, Goldberg also discussed some categories of speech, like the aforementioned "fighting words" doctrine, that are not protected by the First Amendment. In the same vein, he provided some clarity about the incitement speech portion of the claim made on Facebook:

Similarly, Nancy Costello, an associate clinical professor of law and the director of the First Amendment Clinic and of the Free Expression Online Library and Resource Center at Michigan State University, differentiated between various forms of expression, such as expression by students, and speech made by adults. During a phone call with Lead Stories on September 20, 2021, she said:

In an email to Lead Stories on September 20, 2021, Clay Calvert, the Brechner Eminent Scholar in Mass Communication and the director of the Marion B. Brechner First Amendment Project at the University of Florida, said:

It is perfectly legal to say 'Fuck Biden.' The First Amendment protects dissenting political expression, even if it not politely framed. It is true that what the U.S. Supreme Court calls 'true threats' are not protected by the First Amendment, but simply saying 'Fuck Biden' is not even close to being a true threat of violence.

More information about such "true threats" of violence against individuals that would not be protected by the First Amendment can be found here.