Is there a giant U-shaped skyscraper in New York that is so big a plane can easily fly between its uprights? No, that's not true: This image of a large building in Manhattan is just an architectural design for a proposed building that had not been built as of September 2021.

The claim appeared as a Facebook post (archived here) published by Facts & Quotes on September 7, 2021. It opened:

New York giant U-shaped skyscraper is so big that even a plane can easily go through it.

The image is from a proposal by Oiio Studio in New York City, dating back to 2017. Named "The Big Bend," the building was designed by architect Ioannis Oikonomou. It was proposed to be built on Billionaire's Row, the wealthy enclave on 57th Street from Columbus Circle to Park Avenue. The concept was touted as "the world's longest building" as it would be approximately 4,000 feet if measured from end to end.

THE BIG BEND
... There are many different ways that can make a building stand out, but in order to do so the building has to literary stand out.
... New York city's zoning laws have created a peculiar set of tricks trough which developers try to maximize their property's height in order to infuse it with the prestige of a high rise structure. But what if we substituted height with length? What if our buildings were long instead of tall?
If we manage to bend our structure instead of bending the zoning rules of New York we would be able to create one of the most prestigious buildings in Manhattan. The longest building in the world. The Big Bend can become a modest architectural solution to the height limitations of Manhattan. We can now provide our structures with the measurements that will make them stand out without worrying about the limits of the sky.
Ioannis Oikonomou ( design architect )
2017

Here is another image of the proposed building: 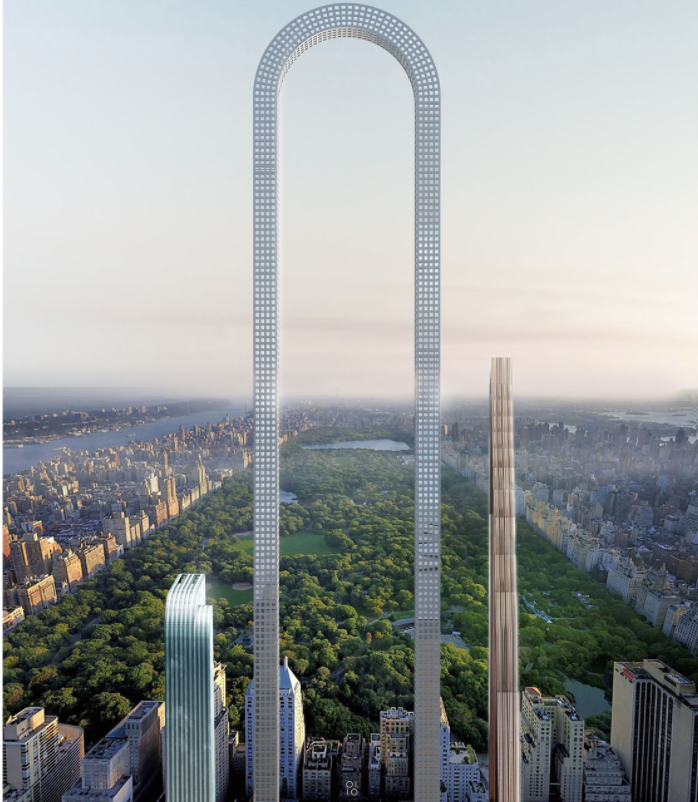