Does a viral image show two bullets that "collided" during the Battle of Gallipoli? No, that's not true: In addition to the lack of the expected rifling marks on one of the bullets, ballistics experts who reviewed the image were not convinced that the bullets "collided."

These two bullets collided in the battle of gallipoli in 1915, the chances of this happening are 1 in a billion. Name something more unlikely to happen...

The bottom of the graphic responded to the text and read:

The Battle of Gallipoli, more commonly known as the Gallipoli campaign, took place between 1915 and 1916 during World War I. Member countries of the Allied powers waged the battle against Turkish forces, then known as the Ottoman Empire, over control of the Turkish straits.

In the image, the bullet going through the other bullet clearly displays rifling marks. "Rifling" refers to the grooves inside the barrel of a gun that spin a bullet for accuracy. The rifling marks on the bullet are circled in the graphic below: 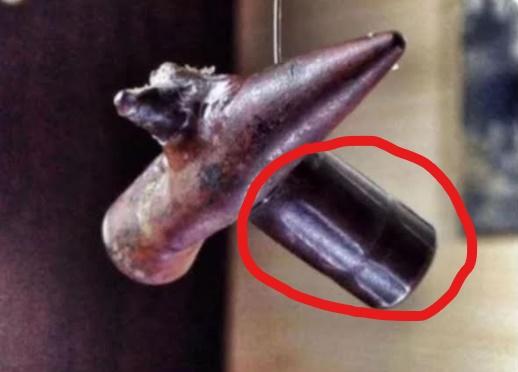 The lack of rifling marks on the other bullet suggests that it was never fired.

Arthur Alphin, a firearms and ballistics expert and military historian, spoke with Lead Stories in a phone call on September 8, 2021. He said that he saw both the image and the actual bullets in question before, the latter as he toured museums in Çanakkale, a province in Turkey. We reached out to the Çanakkale Naval Museum, which contains bullets that appear similar to those in the image (see the second panel in the upper page of the brochure -- archived here), to confirm whether they are the same bullets. We will update the story with any response.

Regarding the origin story behind the bullets, Alphin said:

I have seen this photograph before and this photograph is not -- I say it again, not, not, not -- two bullets in flight that collided. Dollars to donuts, this was a deceased or disabled soldier laying on the ground, and as the long-range machine gun fire came in, a bullet struck his web gear.

Alphin went on to say:

The only time I have seen two bullets that met each other in flight -- there is one at the Gettysburg Museum. But you gotta remember, both of those were 58 calibers -- 580 thousandeths diameter -- .58 caliber, lead mini-balls, at a launch velocity of under 1,100 feet per second. So they could meet each other in flight and yeah, it is technically possible that they could kind of heat weld themselves together and fall to the ground.

Alphin said that by the time the weaponry of World War I was being used, guns that contained rifling were the standard.

In a phone call with Lead Stories on September 7, 2021, Leonard J. Romero, an independent firearms expert, presented other scenarios that the image could actually depict. The lack of rifling marks on the impacted bullets means that the bullet with rifling marks could have hit someone's cartridge belt or that the unfired bullet could have been dislodged from its cartridge case (see "Case, Casing" here).

Joshua Keena, a professional engineer with expertise in weapons engineering, gave a similar interpretation of the image in a phone call with Lead Stories on September 8, 2021. If the bullets collided in mid-air, "there would've been two sources of damage," he said: the collision between the bullets and damage caused by the bullets tumbling off other objects on the battlefield. According to Keena, the two most plausible scenarios are that one of the bullets was impacted on the battlefield or that the bullets were manipulated elsewhere.

During a phone call with Lead Stories on September 8, 2021, Chuck Stephenson, a former FBI agent and a certified firearms instructor, said that it would be impossible for him to definitively confirm or deny whether the two bullets collided in mid-air. However, he also said that "the chances are they probably didn't" interact during a collision or ricochet, considering that "a lot of things have to come together for those two bullets to hit and then weld together like that."