Did air traffic controllers at the Jacksonville International Airport stage a walkout Friday, October 8, to protest COVID-19 vaccine mandates, resulting in all flights in and out of Florida being cancelled? No, that's not true: The National Air Traffic Controllers Association told Lead Stories that "there was weather that affected operations" and it was "a common occurrence." The Federal Aviation Administration (FAA) attributed cancellations to weather and staff positioning.

The claim appeared in an article (archived here) published by The Gateway Pundit on October 10, 2021, with the title, "Media Blackout: It's Not Just Southwest Airlines -- Air Traffic Controllers in Jacksonville Reportedly Walked Out Friday Night Protesting Mandatory COVID Vaccinations Too." The article opened:

Big Media blacked out the news on Friday night that hundreds of flights out of Jacksonville were cancelled due to walkouts in response to vaccine mandates. 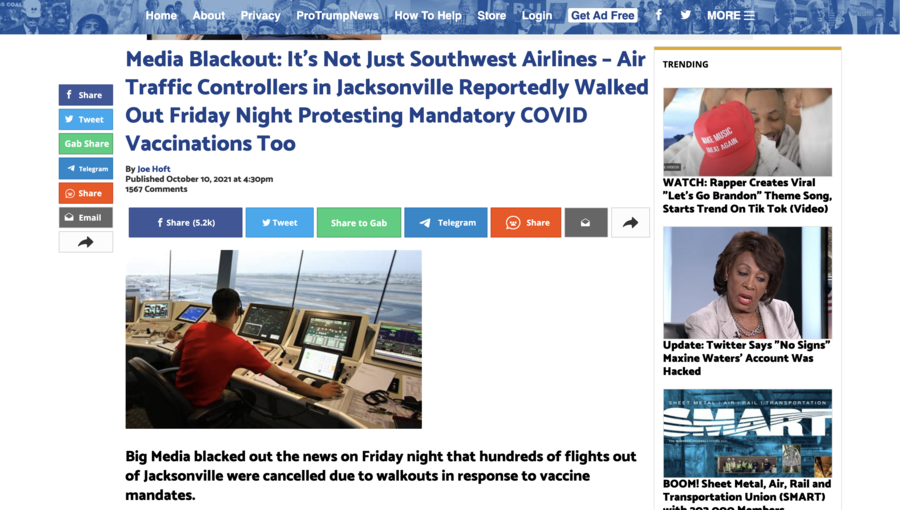 The Gateway Pundit article linked to a Twitter video of someone on the public address system allegedly saying that all flights in and out of Florida had been cancelled, as well as a screenshot of confirmation of the walkout happening from an unnamed source.

Doug Church, the deputy director of public affairs for the National Air Traffic Controllers Association, debunked this in an October 15, 2021, email:

We are aware that there was weather that affected operations at Jacksonville Air Route Traffic Control Center on Friday, Oct. 8; a common occurrence in that facility's airspace.

The FAA posted this series of tweets, attributing cancellations and delays to weather, military training and flight crews being out of position:

No FAA air traffic staffing shortages have been reported since Friday.

Some airlines continue to experience scheduling challenges due to aircraft and crews being out of place. (2/2)

We reached out to a spokesperson for the Jacksonville Aviation Authority (JAA) and they, on October 15, 2021, forwarded us an email from JAA's Chief Operating Officer, Tony Cugno, refuting the rumors that air traffic controllers walked out because of a vaccine mandate:

A rumor is circulating in traditional and social media outlets stating JAX Center located in Hilliard was closed due to an organized walkout late Friday by controllers in response to FAA's mandate that all employees get vaccinated for COVID....

An FAA spokesperson told us in an October 15, 2021 email that, "nothing indicates that the brief staffing shortage at the Jacksonville Center was related to vaccine mandates."

The email continued, "Southwest Airlines and the Southwest pilots union has also said that their staffing issues were NOT related to vaccine mandates."

We've asked that same FAA spokesperson to confirm whether or not Cugno's email was correct that some of the staffing shortage was due to employees having to stay home for 48 hours to monitor for side effects after being vaccinated. We will update this story if we get a response.