Did the Department of Defense "confirm" the majority of those dying and hospitalized with COVID-19 were vaccinated? No, that's not true: The claim is made without any offer of proof. There is no public record of a Pentagon statement about hospitalization and death statistics contemporaneous to this claim. The U.S. agency that collects COVID death and hospitalization data has said the opposite of the claim: By June 2021, the overwhelming majority of hospitalized and/or dying COVID patients were unvaccinated. At the time this fact check was written, the U.S. military required service members to be vaccinated against COVID.

The claim appeared in the headline over an October 3, 2021, BitChute video posted to the WilParanormal account, titled "PENTAGON CONFIRMS MAJORITY DYING AND IN HOSPITALS ARE 'VACCINATED' - DO NOT FLY AFTER NOVEMBER 15" (archived here). It opened:

Do Not Fly after November 15, 2021. The Pentagon has confirmed that the majority of people Dying and admitted...

RUMBLE LINK: https://rumble.com/vna541-pentagon-confirms-majority-dying-and-in-hospitals-are-vaccinated-do-not-fly.html WARNING TO ALL - Do Not Fly after November 15, 2021. The Pentagon has confirmed that the majority of people Dying and admitted...

This fact check does not address the claims about flying after November 15, which are not clearly explained in the video and appear to be somehow related to airlines' vaccine mandates for flight crews.

Lead Stories emailed the press office of the Department of Defense (DOD) to inquire if any new statement has been released and will update this fact check when the duty officer responds. However a search of the web archive of DOD public statements shows only three items in the first 279 days of 2021 contained the term "unvaccinated" and none of them support the claim: 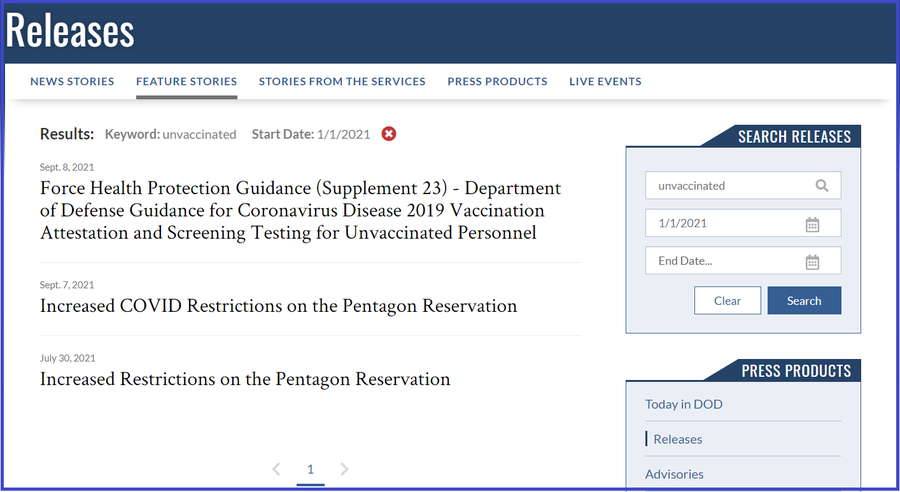 Similarly, no reference to any such DOD statement was found in Google Search, which indexes about 50,000 news sites worldwide: 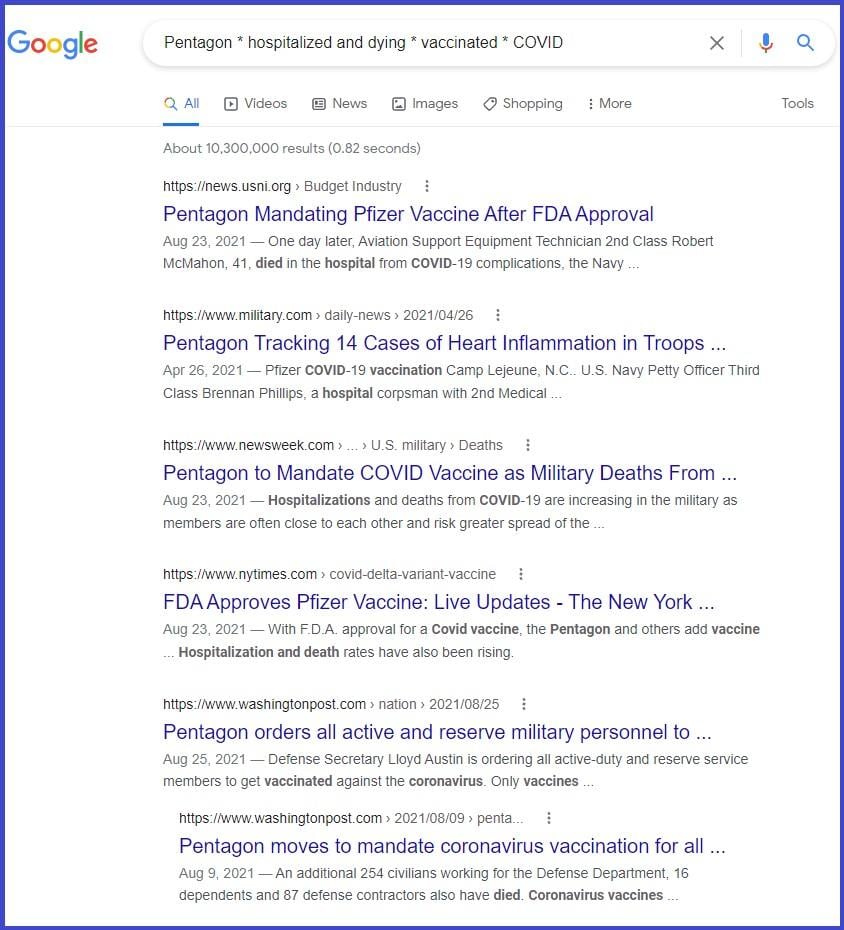 Publicly available data unequivocally refutes the claim. In July 2021, CDC Director Rochelle Walensky announced at a press conference covered by multiple independent news outlets that in the U.S., COVID had become "a pandemic of the unvaccinated," with unvaccinated patients accounting for 97% of all new COVID hospitalizations.

The Kaiser Family Foundation, a nonprofit that conducts independent analysis of public health policy and publishes its findings, found in July 2021 that the unvaccinated account for almost all COVID hospitalizations and deaths, writing: "Almost all (more than 9 in 10) COVID-19 cases, hospitalizations, and deaths have occurred among people who are unvaccinated or not yet fully vaccinated, in those states reporting breakthrough data." With that report, the Kaiser Foundation published this data chart:

Other false claims in the video montage

The false headline about Pentagon statements on COVID vaccinations introduced a video montage of clips from a wide variety of sources declaring false and long-since-debunked conspiracy theories about the pandemic and the vaccines.

Claims about lethality of spike proteins and gene alteration

The opening 1:09 of the video is small, grainy TikTok footage of a Dr. Michael McDowell declaring mRNA vaccines are "new technology never before deployed on a human population" that he called "tools of gene therapy" and a "bioweapon." He said the spike protein the mRNA vaccine generates is pathogenic and will damage humans. McDowell is a Trinidadian minister listed as a Doctor of Theology, not a medical doctor.

Though it uses genetic material, mRNA technology, used since 1990 against Zika and other viruses, delivers instructions to protein-producing cells without entering cell nuclei and it does not alter the patient's DNA in creating spike proteins for the immune system to practice on in preparation for warding off SARS-CoV-2 viruses, which are characterized by spike proteins. The Food & Drug Administration, which approves medications for human use, defines gene therapy as anything that alters the patient's genome. The mRNA vaccines do not. Multiple medical scientists told Lead Stories the FDA is correct that the spike protein is not a pathogen and will not generate a cytotoxic response harmful to the vaccinated person.

What many get wrong about natural immunity, UCLA virologist Dr. Otto Yang explained in a September 15, 2021, phone interview with Lead Stories, is that some infected people develop a robust immunity, while others do not, depending on the viral load to which they are exposed and other factors.

We looked at the antibody levels in those groups and what we saw was that the people who had COVID had very highly variable levels of antibodies ranging over a very large interval and the amount of antibodies they had depended on how severe their infection was. So, someone who has a really severe infection can have antibody levels that are a thousand times higher than somebody who had a mild case of COVID and wasn't hospitalized. And what we found was that after vaccination people have antibody levels that are higher than people who had mild COVID by a lot and get close to the levels, not quite as high, but almost as high as people who had severe COVID.

Then we find that someone who had COVID and then gets vaccinated has the highest antibody levels. Higher than severe COVID-19 and higher than vaccine alone. It didn't matter how mild or severe their COVID was, after they get vaccinated they reach a very high level regardless of what their previous antibody level was. The combination of COVID plus vaccination brings people to this, a ceiling of the highest they could get.

Dr. Francis Collins, a geneticist and director of the National Institutes of Health (the U.S. government's medical research arm) says vaccine immunity provides greater protection than naturally acquired immunity, based on a study published in June 2021 in Science Translational Medicine. Collins, who led the human genome project, wrote in the NIH blog:

The new evidence shows that protective antibodies generated in response to an mRNA vaccine will target a broader range of SARS-CoV-2 variants carrying 'single letter' changes in a key portion of their spike protein compared to antibodies acquired from an infection.

These results add to evidence that people with acquired immunity may have differing levels of protection to emerging SARS-CoV-2 variants. More importantly, the data provide further documentation that those who've had and recovered from a COVID-19 infection still stand to benefit from getting vaccinated.