Is SARS-CoV-2, the novel coronavirus that causes COVID-19, "not a truly isolated human virus" because it was only replicated in monkey cell lines? No, that's not true: While the origin of the virus is hypothesized to be from an animal, the virus was isolated from human patients soon after its emergence in humans. SARS-CoV-2 replication in human cell lines has also been observed.

The claims appeared in an article (archived here) published by Natural News on August 11, 2021. It cited a video interview with Judy Mikovits, a virologist and anti-vaccine conspiracy theorist who has made debunked claims about COVID. A section of the article reads:

Every bio-safety level 4 lab that claimed to isolate SARS-CoV-2 from humans ultimately placed the sample in a monkey kidney cell line to 'prove' its replication. This virus is not a truly isolated human virus because it could only be replicated in the monkey kidney cell line. To determine whether SARS-CoV-2 is an infectious human virus, it must be taken from the blood, sputum, or lung lavage of an infected human, but the infectious RNA of SARS-CoV-2 was never cultured in a continuously growing human cell line that supports the replication of SARS-CoV-2. Since this novel coronavirus only replicates demonstrably in vero monkey cell lines, it has never been proven to originate or spread from human-to-human, let alone spread from healthy people.

Since the current flu, MMR and polio vaccines contain these same vero monkey cell lines, the only way to deploy SARS-CoV-2 is through transfection via these needles.

This is how the article appeared online on November 10, 2021: 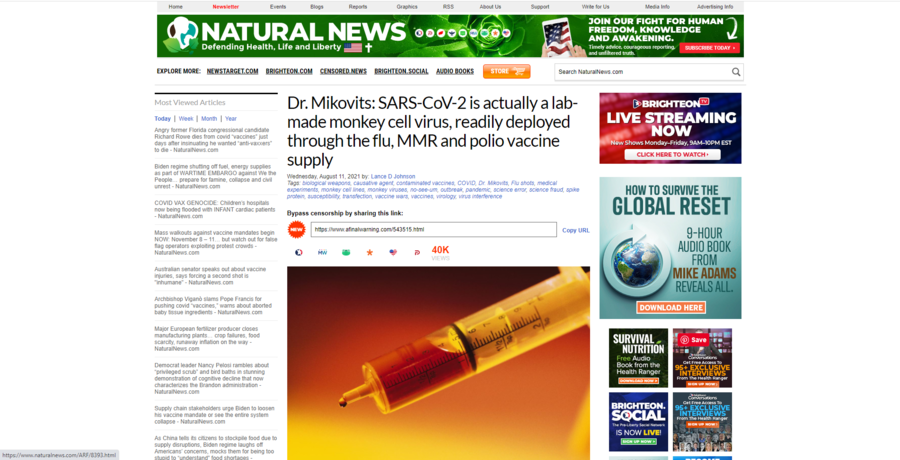 These claims are not true, as explained below:

Misinterpreted claim: "Every bio-safety level 4 lab that claimed to isolate SARS-CoV-2 from humans ultimately placed the sample in a monkey kidney cell line to 'prove' its replication."

Lead Stories reached out to the Centers for Disease Control and Prevention (CDC) for more information about SARS-CoV-2 isolation and was referred to the agency's resource "SARS-CoV-2 Viral Culturing at CDC." The resource contains links to the article "Severe Acute Respiratory Syndrome Coronavirus 2 from Patient with Coronavirus Disease, United States." The abstract describes researchers isolating SARS-CoV-2 from samples taken from the first U.S. patient infected with the virus and reads in part:

The etiologic agent of an outbreak of pneumonia in Wuhan, China, was identified as severe acute respiratory syndrome coronavirus 2 in January 2020. A patient in the United States was given a diagnosis of infection with this virus by the state of Washington and the US Centers for Disease Control and Prevention on January 20, 2020. We isolated virus from nasopharyngeal and oropharyngeal specimens from this patient and characterized the viral sequence, replication properties, and cell culture tropism.

The isolated virus was placed in both human cell lines and nonhuman cell lines, meaning it was not exclusively placed in a Vero cell line, which is most likely the "monkey kidney cell line" the claim references. According to the "Results" section of the article:

Because research has been initiated to study and respond to SARS-CoV-2, information about cell lines and types susceptible to infection is needed. Therefore, we examined the capacity of SARS-CoV-2 to infect and replicate in several common primate and human cell lines, including human adenocarcinoma cells (A549), human liver cells (HUH7.0), and human embryonic kidney cells (HEK-293T), in addition to Vero E6 and Vero CCL81 cells. We also examined an available big brown bat kidney cell line (EFK3B) for SARS-CoV-2 replication capacity.

False claim: "This virus is not a truly isolated human virus because it could only be replicated in the monkey kidney cell line."

The basis of this claim may have originated from the CDC study stating that "No CPE was observed in any of the cell lines except in Vero cells." However, John Lednicky, a research professor in environmental and global health at the University of Florida who is affiliated with the university's Emerging Pathogens Institute, clarified that a cytopathic effect -- the aforementioned CPE -- is not the same as viral replication. CPE is defined as a structural change in a cell due to a viral infection. During a phone call with Lead Stories on November 10, 2021, Lednicky said:

There are many viruses that will grow and replicate but not kill cells or not form noticeable cytopathic effects. The presence of cytopathic effects does not -- it's not the only criteria that the virus is replicating.

Indeed, the CDC study went on to describe some SARS-CoV-2 replication in human cell lines:

In contrast, HUH7.0 and 293T cells showed only modest viral replication, and A549 cells were incompatible with SARS-CoV-2 infection. These results are consistent with previous susceptibility findings for SARS-CoV and suggest other common culture systems, including MDCK, HeLa, HEP-2, MRC-5 cells, and embryonated eggs, are unlikely to support SARS-CoV-2 replication. In addition, SARS-CoV-2 did not replicate in bat EFK3B cells, which are susceptible to MERS-CoV. Together, the results indicate that SARS-CoV-2 maintains a similar profile to SARS-CoV in terms of susceptible cell lines.

Stanley Perlman, a professor of microbiology and immunology at the University of Iowa, said during a phone call with Lead Stories on November 10, 2021:

The way [this claim is] written doesn't make any sense to me as a scientist.

Perlman also suggested another article describing SARS-CoV-2 isolation published before the CDC study by the New England Journal of Medicine. It was written by scientists based in China, where the virus originated. The article shows that the virus was isolated using samples from humans and replicated using a human cell line.

Lead Stories reached out to the authors of the CDC study and will update this fact check with any response.

False claim: "Since this novel coronavirus only replicates demonstrably in vero monkey cell lines, it has never been proven to originate or spread from human-to-human, let alone spread from healthy people."

At the time of writing, COVID-19, the disease that results from SARS-CoV-2, has resulted in more than 250 million cases and five million deaths worldwide, according to the World Health Organization. The virus not only spreads from human to human, but its rapid transmission has resulted in a global COVID-19 pandemic.

False claim: "Since the current flu, MMR and polio vaccines contain these same vero monkey cell lines, the only way to deploy SARS-CoV-2 is through transfection via these needles."

Lednicky said of this claim:

That's jibber-jabberish nonsense being made by people who either don't understand the science or these are people who are deliberately just causing problems.

Vero cell lines are used for the production of several viral vaccines. However, since SARS-CoV-2 does not originate from Vero cell lines and tends to spread through human-to-human transmission as discussed above, this claim has no basis.

Lead Stories has previously tackled claims involving SARS-CoV-2 isolation, the latest of which can be found here.