Did an economics professor at a local college fail an entire class to teach the students a lesson -- that socialism does not work? No, that's not true: This allegorical story has circulated on the internet for many years, with a few changes, but there is no evidence that this social experiment ever happened. The classroom experiment of averaged grades was a literary device for the unattributed author, but not a real college professor.

The story of the teacher who failed the whole class dates back to at least 2009. It was debunked by Snopes.com at the time. It has resurfaced several times in several forms, most recently as a photograph of a newspaper clipping of an August 13, 2020, opinion column of Dennis Richardson named "My View." One example is a Facebook post on November 21, 2021, with no caption. The editor's note that begins the column explains:

[EDITOR'S NOTE: I found this in my news feed on one of the social media sites and thought how practical a lesson this would be. Even I would have learned from it as dense as I am]. 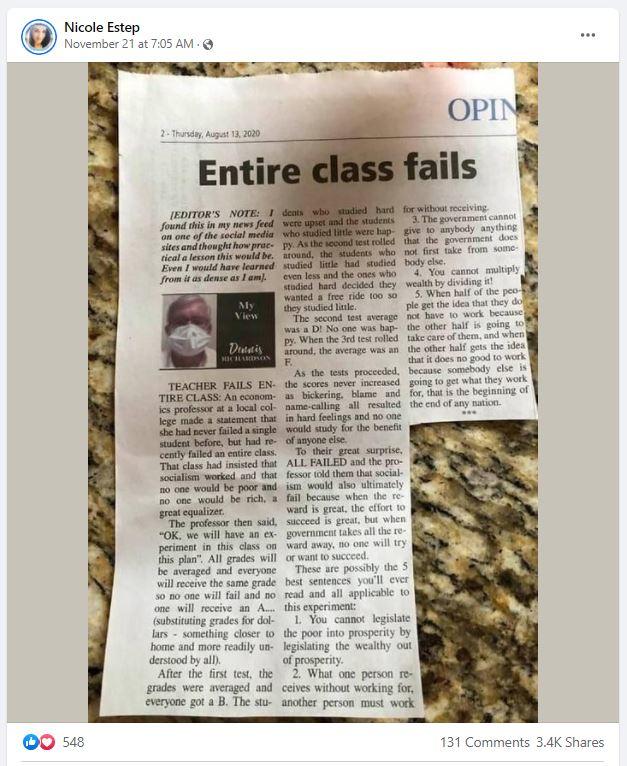 TEACHER FAILS ENTIRE CLASS: An economics professor at a local college made a statement that she had never failed a single student before, but had recently failed an entire class. That class had insisted that socialism worked and that no one would be poor and no one would be rich, a great equalizer.

The professor then said, 'OK, we will have an experiment in this class on this plan.' All grades will be averaged and everyone will receive the same grade so no one will fail and no one will receive an A... (substituting grades for dollars - something closer to home and more readily understood by all),

After years of circulating as a chain email and copy paste item on social media, the story left the online medium and was published in the August 13, 2020, print edition of the Chester County Independent, a weekly newspaper in Tennessee. It also appeared in the online edition of chestercountyindependent.com, and now a photo of the print version has returned to social media. The newspaper editor made it clear that the item was found on social media and it is not presented as a news story.

This fact check is not looking into the merits or flaws of the social experiment in the story. It is to add the context that this is not a real news story.

On April 10, 2015, thefederalistpapers.org published the story composed within two images with white text on a black background and featuring a photo of a professor lecturing. In that version the male professor is said to be at Texas Tech while the more recent version has a female professor at a local college.

Some versions of the story finish with the lesson:

To their great surprise, ALL FAILED, and the professor told them that socialism would also ultimately fail because when the reward is great, the effort to succeed is great, but when government takes all the reward away, no one will try or want to succeed.

Other versions, including this one, continue with an additional part that had been a standalone copy and paste post that was also circulating on Facebook back in 2009. 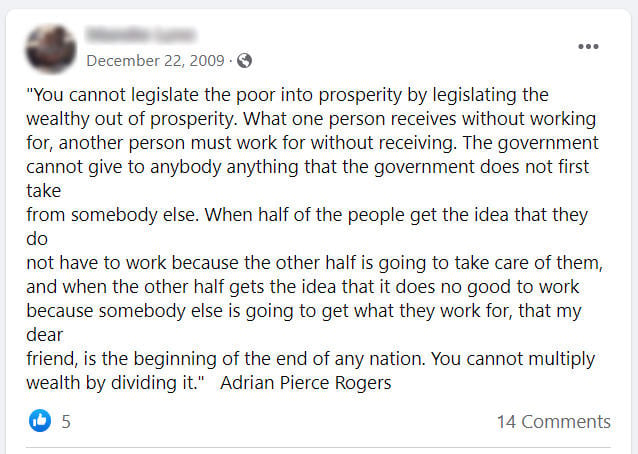 That quote is usually attributed to evangelist Adrian Pierce Rogers. Although Rogers did use the quote in a sermon and in a book, it originated from Gerald L.K. Smith, an anti-communist minister and holocaust denier, in a 1957 edition of his magazine The Cross and The Flag. This was featured in a fact check by truthorfiction.com on October 18, 2019. The version of the Smith quote added at the end of the economics professor story appeared like this in the Chester County Independent:

These are possibly the five best sentences you'll ever read and all applicable to this experiment: