Did the Italian government exaggerate the number of COVID-19 deaths in the country? No, that's not true: The late-2021 refinement of Italy's statistics did not change the number of COVID deaths documented in Italy. The Italian government began publishing data that shows how many people died of COVID with other serious health conditions (called comorbidities) and how many died of COVID with no other comorbidities. As has been the case worldwide, the data show Italians with life-shortening conditions such as obesity, heart disease, lung disease and age-related infirmities are more vulnerable to COVID.

The claim appeared in an article (archived here) where it was published by humansarefree.com on November 3, 2021 under the title "HUGE! Italy's Suspected Covid Death Tally Corrected From 132,161 to 3,783." The article opened:

A new report from Italy's Higher Institution of Health provides an objective analysis of the nation's misleading covid-19 death tally. Italy's official covid death tally rose to 132,161 in October of 2021. This tally is unrealistic because covid-19 was diagnosed in haste and under conditions of financial bribery using non-specific diagnostic criteria. 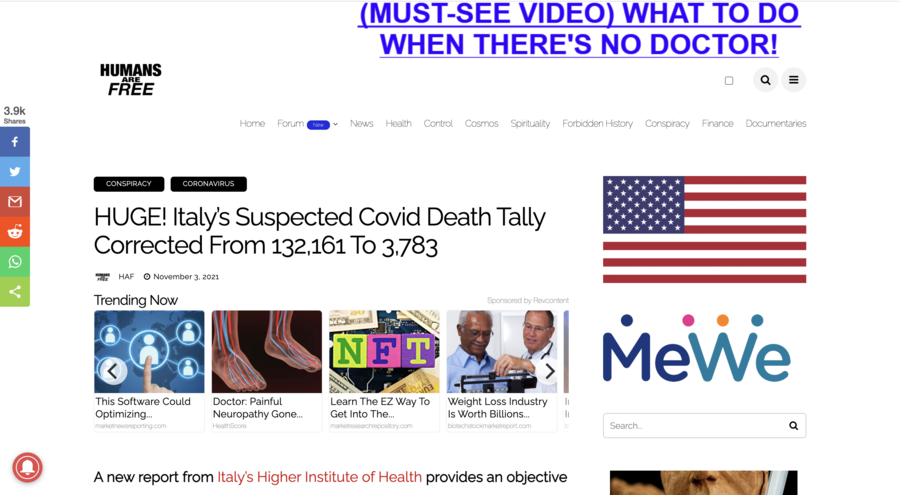 The Italian Higher Institute of Health (referred to as ISS) sent out a tweet in Italian on October 25, 2021, with the translated version stating:

Linked in the tweet was an article in Italian published by the Italian Higher Institute of Health. The article has been translated by Google Translate:

In relation to what was reported by various media regarding the data contained in the report on the characteristics of patients who died positive for SARS-CoV-2 in Italy published last October 19, and in order to promote their appropriate interpretation, it is considered useful to specify that:

Here is a fact check of a similar claim, published by OPEN, a nonprofit journalism website oriented to young readers and issues affecting the young. The fact checkers debunk the claim that the Italian government added non-COVID deaths to the COVID-19 death tally, inflating the death toll.