Did Gavin Newsom awaken from a vaccine coma at GITMO? No, that's not true: California Gov. Newsom was not in a coma at the Guantanamo Bay Detention Camp after receiving the COVID-19 booster shot on October 27, 2021. While he was not seen in public for almost two weeks after he received the shot, he was photographed at a wedding in San Francisco on November 6, 2021, and appeared live at a political event on November 9, 2021. The site that made the claim is a satire website known for outlandishly false stories about celebrities and politicians being arrested, tried and executed at GITMO, none of which have proven to be true.

Failed California Governor Gavin Newsom got a rude awakening, literally, when he first opened his eyes Monday morning following a 11-day-long vaccine-induced coma that he fell into shortly after receiving a Covid-19 booster shot. The first thing Newsom saw through eyes opened to narrow slits were a Navy physician removing an intubation tube from his [...]

Failed California Governor Gavin Newsom got a rude awakening, literally, when he first opened his eyes Monday morning following a 11-day-long vaccine-induced coma that he fell into shortly after receiving a Covid-19 booster shot. The first thing Newsom saw through eyes opened to narrow slits were a Navy physician removing an intubation tube from his [...]

There is no truth to the story that Newsom fell into a coma after receiving a COVID-19 booster shot and woke up at the Guantanamo Bay Detention Camp.

"San Francisco's City Hall is designed to inspire awe--a symbol of the city's power and resilience after the devastating 1906 earthquake and fire, with its white marble detailing and soaring dome that looms more than 300 feet overhead," Hamish notes. "But despite the architectural magnificence--and the panoply of state, with Nancy Pelosi officiating and Governor Newsom and Mayor Breed in attendance--the ceremony managed to feel extraordinarily intimate and personal, with Tobias's charming vows and his passionate kiss that dislodged Ivy's crown!"

Newsom is in photograph 65 of 100 by Jose Villa on the Vogue website. He is wearing a black tuxedo with a white shirt and black bow tie and a black face mask. He is in the right corner of the photograph, above the shoulder of the bride's grandfather. 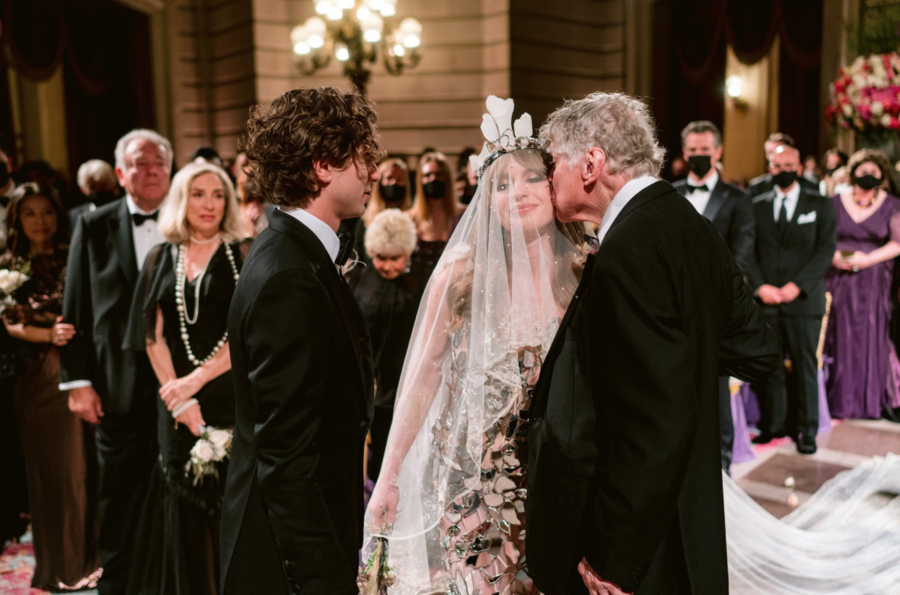 Photo: Jose Villa
65/100
Ivy's grandfather Gordon Getty gives her a kiss at the end of the aisle.

On November 9, 2021, Newsom appeared at the 2021 California Economic Summit sponsored by California Forward: 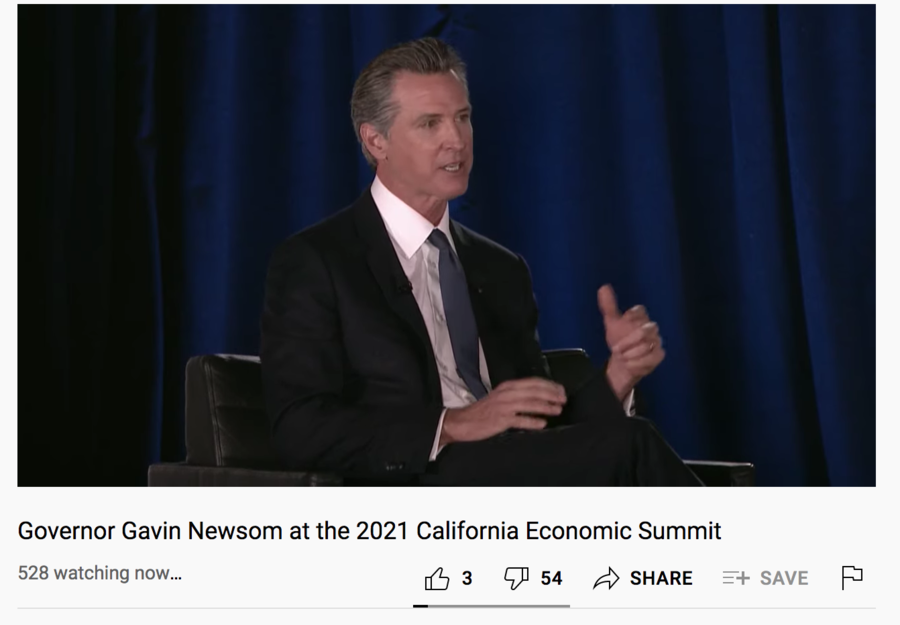 Here is a YouTube video of Newsom at the 2021 California Economic Summit on November 9, 2021: