These images are miscaptioned and inaccurately represent earlier Austrian protest photos and videos, or they show an entirely different protest from some other time. The photo in the upper right, for instance, shows a September 27, 2019, protest in Austria demanding new climate change policies from the government instead of capitalistic ventures.

This post features a collection of three photos, a portion of a video, and a text caption that has been circulating online. The different images come together in this Instagram post (archived here) on November 30, 2021. The caption with the post opened:

The text in the image located in the upper right-hand corner of this post reads:

The text in the portion of the video below the three photos reads:

THE REVOLUTION WILL NOT BE TELEVISED 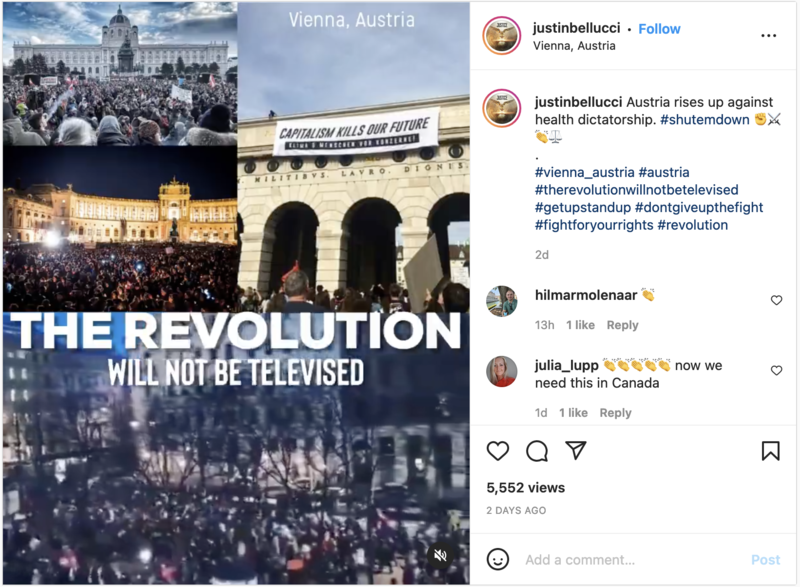 On November 19, 2021, Chancellor Alexander Schallenberg announced that a full national COVID-19 lockdown in Austria, lasting 20 days, would go into effect, followed by a legal mandate for all Austrians to be vaccinated from February 1, 2022. By December 4, 2021, protests sparked in Vienna, which is also the capital of Austria, against these mandates.

The photo on the right side of this collage was posted in a tweet on September 27, 2019, referring to a protest in the Heldenplatz square in Vienna demanding climate change policies over the Austrian government's capitalistic ventures. 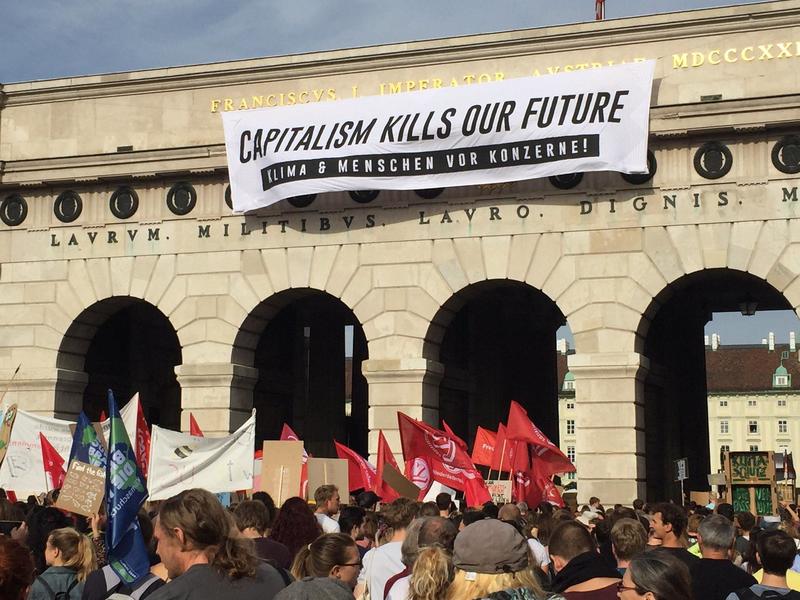 A Yandex reverse image search reveals that the photo in the top left corner of this post originated from a China Global Television Network (CGTN) article on the COVID 19 protests that took place on January 18, 2021, in Vienna, Austria near The Natural History Museum.

Another Yandex reverse image search revealed that the photo on the bottom left, above the video portion of the post, originated from a tweet published by UN Refugee Agency External Relations Officer and award-winning photographer, Roland Schoenbauer. This image, taken on February 2, 2018, depicts #LichtermeerfürUteBock, which translates to "Sea of Lights for Ute Bock" and is currently recorded in the book "Cultural Protest Against the Austrian Far Right in the Early Twenty-First Century." This protest is in solidarity with migrants and serves as a remembrance of Austrian philanthropist Ute Bock. She is mainly known for her activism in supporting refugee asylum seekers. 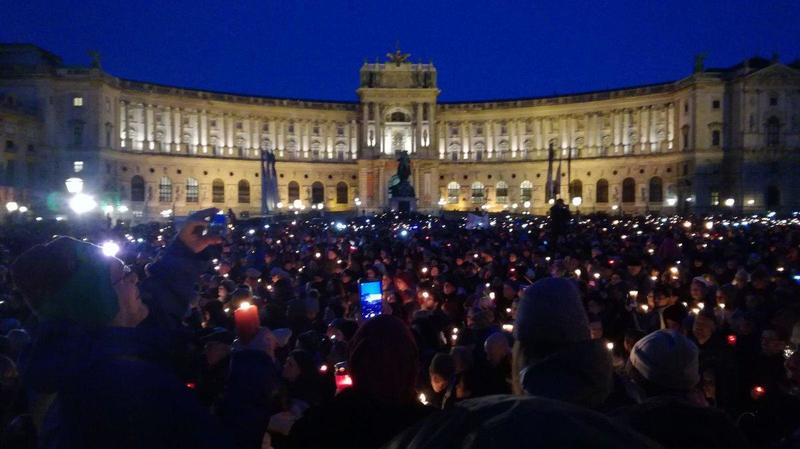 The video portion, located at the bottom of this post, has added text that refers to the Black Power movement of the 1950s as well as a 1971 song "The Revolution Will Not Be Televised" by Gill Scott-Heron. He wrote the expression as a reference to the disconnect between actively participating in a street protest versus passively participating in the same protest from afar following the American Civil Rights Movement of the 1960s.

However, a Yandex reverse image search reveals that the video was published from a QAnon profile on a social video-sharing website based in Spain. The title underneath the video on the website translates to "Europe rises! So many people demonstrated yesterday (01-28-2021) in Vienna / Austria like never before!"

A Google image search using the keyword "Vienna" also revealed a January 31, 2021, Reuters article which includes the same images and information portrayed in the previous search of the video regarding a "banned far-right demonstration against coronavirus restrictions." The protest took place "on a square in central Vienna across the central ring road from the former imperial palace as well as from the offices of Kurz and President Alexander Van der Bellen" earlier this year- not recently between the months of November and December of 2021.

This is not the first time Lead Stories has reported on miscaptioned images in posts concerning COVID-19 restrictions and vaccination mandates in Europe. An article on protests against restrictions due to the COVID-19 pandemic in France can be found here.