Does this collection of photos together with this caption accurately portray protests against COVID-19 vaccine passports and mandates that took place for several weeks in July and August of 2021 in France? No, many of the photos currently circulating on social media are miscaptioned, and either inaccurately represent a recent French protest photo, or they show an entirely different protest from some other place or time. The photo in the upper right, for instance, shows the March 10, 1991, protest in Moscow demanding the resignation of then-Soviet President Mikhail Gorbachev.

This post features a collection of three photos and a text caption that has been circulating online. The elements come together in this post (archived here) published on Facebook by "Young Americans Against Socialism" on August 16, 2021. The caption with the post reads:

The French are standing up for their freedom! They have a leftist government attempting to force mandates and the people are saying no more! Don't stop fighting for freedom, no matter what country you're in because everyone is needed to fight off tyranny!

The text included inside the meme says:

France is on the brink of revolution. Hospital workers are not just refusing the jabberwocky, they are refusing to administer it.
This photo is from Paris yesterday. People in cities around the country are in the streets protesting govt mandated vpassports.

On July 12, 2021, French President Emmanuel Macron announced that all health workers would be required to get COVID-19 vaccinations by September 15. This announcement touched off protests in France on the weekends of July 17-18 and July 24-25, 2021, and continued into August.

The caption included in this meme claims that hospital workers are not just refusing to be vaccinated but they are refusing to administer COVID-19 vaccines. Working with our team in Quebec, Canada, Lead Stories was unable to find any corroborating reports that health care workers were mounting a protest by refusing to administer vaccines. We found social media posts in both French and English that repeated this claim, but French-language media only reported health care workers who did not want to be vaccinated were protesting, their unions called for strikes, and some considered resigning. 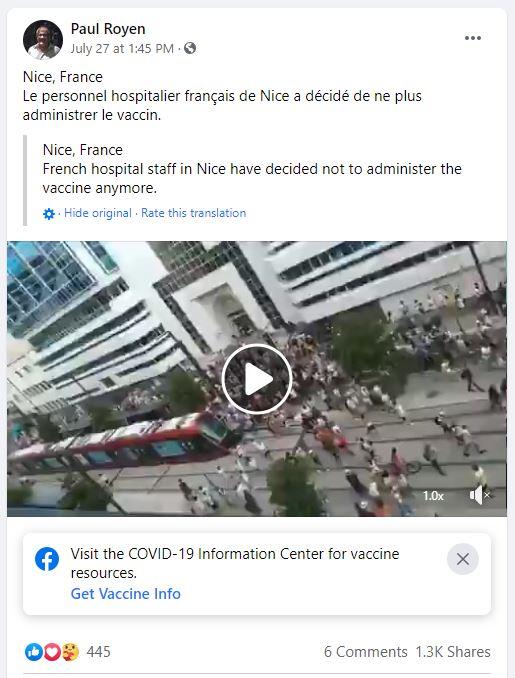 The photo on the left side of the meme was posted in a tweet on July 31, 2021, that was the day of that protest, not "yesterday," which would have been August 15. The protesters traveled a route from Villiers to the Bastille.

The photo in the upper right shows the March 10, 1991, protest in Manezh Square in Moscow, where people were demanding the resignation of Soviet President Mikhail Gorbachev. (AP photo here) This photo has a history of being miscaptioned, some memes have misidentified this as the September 28, 1991, "Monsters of Rock" Metallica concert which took place at the Tushino Airfield near Moscow. 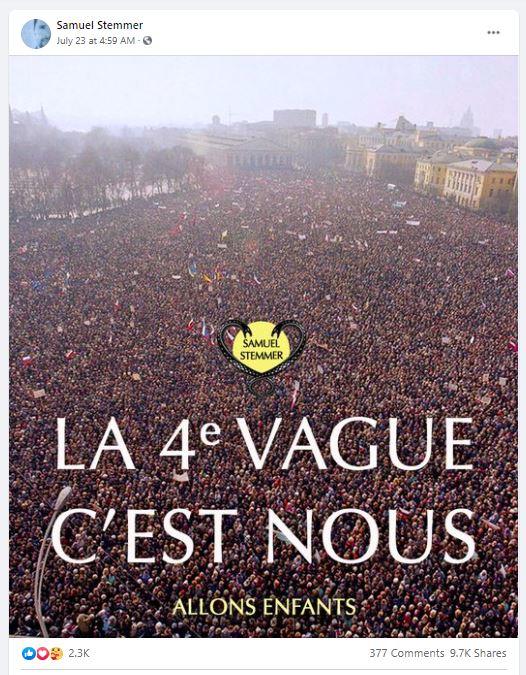 The photo of the Moscow protest posted to Facebook by Samuel Stemmer on July 23, 2021, has text added. "La 4e Vague C'est Nous" translates to "The fourth wave is us," and "Allons enfants" are the opening words of the French national hymn, "La Marseillaise." The starting verse says, "Let's go children of the Fatherland. The day of glory has arrived."

The photo in the lower right corner shows a line of uniformed policemen leading a group of protesters, a sign reads "Macron Veran Castex tuent nos libertes" This protest sign refers to the French president, Emmanuel Macron; Minister of Health Oliver Veran, and the prime minister, Jean Castex, and says they "kill our freedoms." This photo was posted on Twitter on July 24, 2021, by Lucas Leger, a journalist with RT en Francais, the French version of the Russian state-controlled news channel. His caption identifies this as protesters against the vaccine passport in Paris.

France is on the brink of a revolution. Hospital workers are not only refusing the injection, they are refusing to administer it! Police are standing with the people as they protest against vaccine passports. 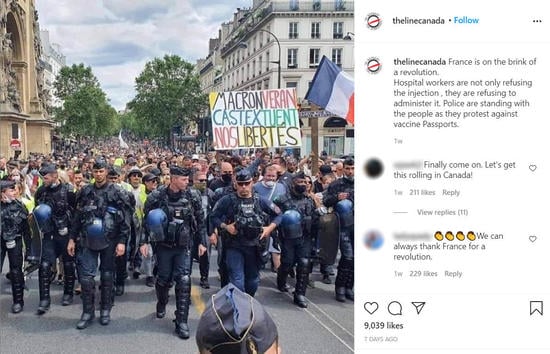 This misleading caption was the focus of an August 12, 2021, fact check on factcheck.afp.com that shared an explaination from the Paris Police Prefecture:

It is common practice for police officers and gendarmes to stand in front of and behind a procession of demonstrators in order to carry out their mission of securing the demonstration.

On Instagram, an August 14, 2021, post with the July 24, 2021, protest photo including the policemen is captioned, "This photo is from Paris yesterday."

FRANCE may be the FIRST to TAKE BACK THEIR COUNTRY.

The image does not show an anti-vaccine mandate protest from 2021. This photo appears in the January 11, 2015, article in businessinsider.com titled, "Here's What Paris Looked Like As 1 Million People Marched Against Terror." The article explains:

The moving spectacle comes in the wake of multiple acts of terror this week, including one on the satirical magazine Charlie Hebdo. The attacks left 17 dead.

The march, known as the Marche Republicaine, drew countless French citizens, as well as over 40 foreign leaders.