Was the first Bible to be printed in America published by Congress? And was the intention for that Bible to be used in public schools? No, that's not true: This meme has several inaccuracies. The first complete Bible to be printed in the 13 colonies was published by an English missionary, John Eliot, in the Massachusetts Bay Colony in 1663. The Eliot Indian Bible, also known as the Algonquin Bible or "Mamusse wunneetupanatamwe Up-Biblum God" was a version of the Geneva Bible.

The first Bible to be printed in English in the British colonies was published in 1782 by a Philadelphia bookseller and publisher, Robert Aitken. Since there was a shortage of imported English Bibles due to the Revolutionary War, Aitken sought the approval of Congress for this undertaking. The Aitken Bible was reviewed and approved by Congress but it was not commissioned or published by Congress. The proposal that the Bible could be used in schools came from the publisher and was not a direction from Congress.

Claims misrepresenting the first Bible in America as a government production for schools have circulated for decades. One example surfaced in a Facebook post on November 25, 2021 (archived here), with no caption. The text-only meme reads:

Did You Know?
The first Bible printed in America was printed by Congress for use in our PUBLIC SCHOOLS.

On the inside cover is says, 'this Congress recommends this book to every inhabitant of these United States! 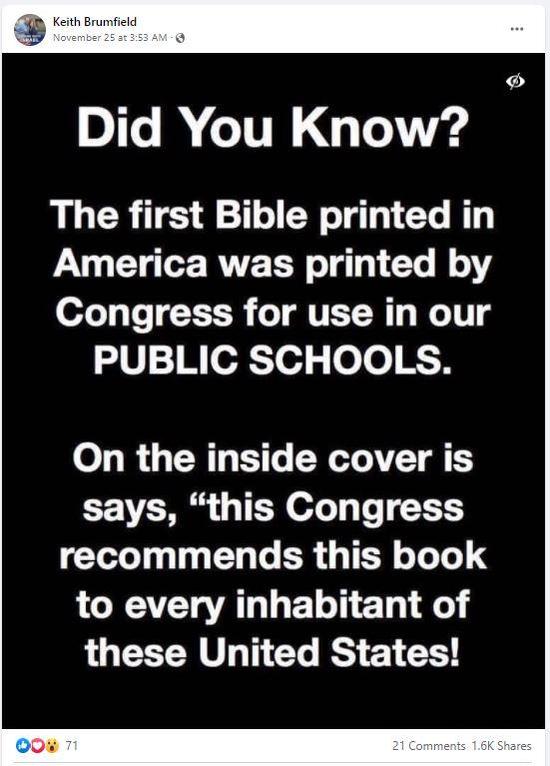 Examples of this inaccurate history, as well as their corrections, can be found in decades-old articles and books. One example is a September 13, 1982, letter to the editor of the New York Times, written by (Rev.) H. Roy Anderson of the Christian Anti-Defamation League in support of a federal public prayer amendment. He based his argument on the incorrect belief that the first American Bible had been published by the government:

The intent of the legislators is set forth in the introductory pages of a 1968 reprint of this Government-funded Bible (Library of Congress Catalog No. 68-20448).

A September 23, 1982, letter to the editor in response to Anderson's assertion, offered a correction from Bernard J. Sussman:

Aitken added the text of this commendation to the binding of his Bibles. The kind words were all the Congress ever gave his edition.

The recommendation from Congress printed inside the Aitken Bible (view original here) has several parts. The chaplains to the Continental Congress, William White and George Duffield, had been tasked to review Aitken's Bible. Even their endorsement demonstrates that this Bible was not comissioned by Congress because they mention the risk of private fortune Aitken took on in its production:

Gentlemen,
AGREEABLY to your desire we have paid attention to Mr. Robert Aitken's impression of the Holy Scriptures of the Old and New Testament. Having selected and examined a variety of passages throughout the work, we are of opinion that it is executed with great accuracy as to the sense, and with as few grammatical and typographical errors as could be expected in an undertaking of such magnitude. Being ourselves witnesses of the demand for this invaluable book, we rejoice in the present prospect of a supply; hoping that it will prove as advantageous as it is honorable to the Gentleman, who has exerted himself to furnish it, at the evident risk of private fortune. We are, Gentlemen, Your very respectful and humble servants,

The second part of this claim is that Congress intended this Bible to be used in schools. Additional examples of this claim can be found in this 2016 Facebook post and this 2013 video titled, "David Barton's Capitol Tour." In this video, the text of the endorsement on the first pages is highlighted and the impression is that the mention of schools can be found there. Barton says to the tour group:

... it identifies the congressional committee that oversaw the project and the names of the Congressional chaplains who attest to its accuracy. It was subscribed to Congress as quote 'a neat edition of the Holy Scripture for the use of our schools' end quote. In the front of the cover it says that Congress resolved the United States and Congress assembled recommend this edition of the Bible to the inhabitants of the United States.

Congress never mentioned schools in the imprimatur they offered Aitken. The quote that Barton cited is from Aitken's own January 21, 1781, petition to Congress (called a memorial). Aitken's memorial is a matter of record, but it was not printed in the Aitken Bible. The publisher suggested that this Bible could be used in schools when he asked Congress for their permission and endorsement of the work in progress -- which was given. He also asked for a commission or some funding -- which was not granted.

Under this persuasion your Memorialist begs leave to, inform your Honours That he both begun and made considerable progress in a neat Edition of the Holy Scriptures for the use of schools, But being cautious of suffering his copy of the Bible to Issue forth without the sanction of Congress, Humbly prays that your Honours would take this important matter into serious consideration & would be pleased to appoint one Member or Members of your Honourable Body to inspect his work so that the same may be published under the Authority of Congress. And further, your Memorialist prays, that he may be commissioned or otherwise appointed & Authorized to print and vend Editions of, the Sacred Scriptures, in such manner and form as may best suit the wants and demands of the good people of these States, provided the same be in all things perfectly consonant to the Scriptures as heretofore Established and received amongst us.

It was more than 100 years earlier that the first Bible was printed in the 13 colonies. This undertaking took the English missionary John Eliot 14 years to accomplish and the assistance of several bilingual Nipmuc scholars to translate the King James Bible into the indigenous Wampanoag language. The project was funded entirely with donations from the British charitable organization that had been created by an act of Parliament in 1649. It was called the Company for Propagation of the Gospel in New England or The New England Company.

In 1653, before printing the Bible, and with the help of several Algonquian scholars, Eliot printed a primer and catechism in Wampanoag language. These were printed in Cambridge, Massachusetts, on the press that had been the first and only printing press in the colonies since its arrival in 1638. This was followed in 1663 with 1,000 copies of the 1,180-page complete edition of the Old and New testaments. In 1993 this Bible, was used in the Wôpanâak Language Reclamation Project, to return language fluency to the Wampanoag Nation.