Did Japan endorse the use of ivermectin as a treatment for COVID-19, sending cases plummeting in late August 2021? No, that's not true: While Haruo Ozaki, the chairman of the Tokyo Medical Association, said at an August 13, 2021, press conference that the anti-parasitic drug showed promise, he also said it needed to be studied thoroughly. The Tokyo Medical Association is part of the Japan Medical Association. Neither are government agencies and neither represent the views of the Japanese government or the ministry of health. Coronavirus cases did plummet in Japan after peaking in the second half of August 2021, but it had nothing to do with ivermectin. Instead, Japanese officials credit an aggressive vaccination campaign.

The claim appeared in a video posted to YouTube (archived here) by Dr. John Campbell on November 23, 2021, titled, "Ivermectin in Japan." It begins with Campbell saying:

We want to look today at what only can be called the 'Japanese Miracle,' really. 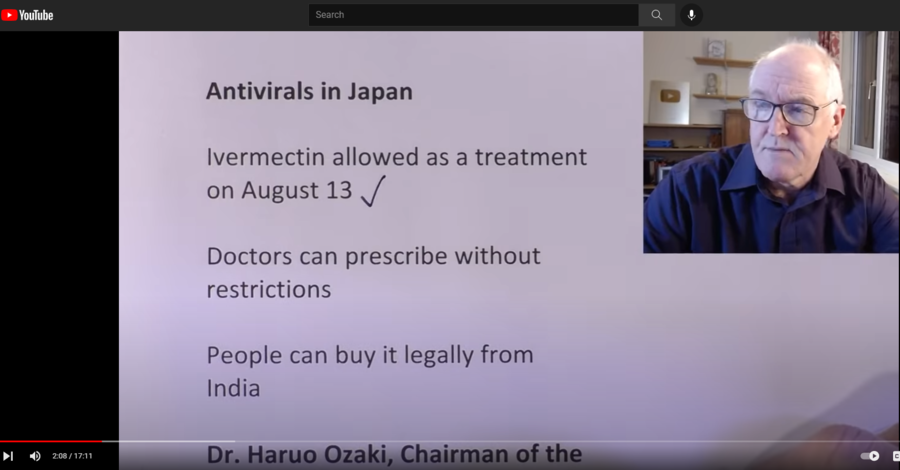 John Campbell is a popular YouTube host with more than 1.6 million subscribers to his channel. Campbell is not a physician but a retired emergency department nurse. According to the "About" page on his YouTube channel, his Ph.D. "focused on the development of open learning resources for nurses nationally and internationally." Since starting his channel in 2007, he has posted thousands of videos on a variety of medical topics but has focused primarily on COVID since the start of the pandemic.

Campbell's video details what he calls the "Japanese Miracle," which he attributes to the introduction of ivermectin as a treatment for COVID in mid-August. His three main talking points are:

To Campbell's first point, ivermectin was never approved as a COVID treatment by the Japanese government or the ministry of health. It is true that Ozaki, the chairman of the Tokyo Medical Association, said at a press conference on August 13, 2021, near the peak of the country's summer COVID wave, that the anti-parasitic drug showed promise. This is what he said about ivermectin, according to Google Translate:

It is necessary to thoroughly study the clinical trial, but it seems that we are at the stage where it is okay to have the patient give an informed outlet [consent] and get permission to use it.

However, Ozaki is not a government official and ivermectin was not endorsed as a treatment for the virus. He was stating his opinion or the opinion of the medical association.

To Campbell's second point, doctors in Japan are allowed to prescribe ivermectin. There are many legitimate uses for the drug, which can treat certain infections caused by internal and external parasites. But in Japan, ivermectin is not on the list of approved medical products for COVID-19, according to the country's Pharmaceuticals and Medical Devices Agency.

In the United States, the Centers for Disease Control and Prevention issued a health advisory warning against the use of ivermectin to prevent or treat COVID-19 on August 26, 2021, that says:

To Campbell's third point that people can buy the drug legally from India, it is complicated but possible. This is what the website for the Japanese Ministry of Health, Labour and Welfare says about it:

Q1. Can I bring /send any prescription medicine into Japan from abroad?

Also, the medicine must be prescribed. It cannot simply be ordered from another country.

Japan began an aggressive vaccination campaign in June 2021, a full two months ahead of the August peak. Japan's COVID vaccine minister Taro Kono released a video on June 17, 2021, calling the vaccines "our trump card in bringing an end to COVID-19 pandemic."

As of November 29, 2021, 197,101,669 vaccine doses had been administered in Japan, according to the Japanese prime minister's website. More than 77% of Japan's population was fully vaccinated, compared to 58.9% of Americans, according to the CDC.