Does the brain have seven minutes of activity after the body dies, replaying memories in a dream sequence? No, there is no evidence to substantiate that claim: When the heart stops, the brain stops, according to a WebMD article titled, "Does Your Brain Know When You're Dead?" According to a neuroscience expert, it is "very very unlikely" that the brain will have coordinated thought or consciousness after brain death.

When you die you have 7 minutes of brain activity left, which is your brain playing back memories in a dream sequence. 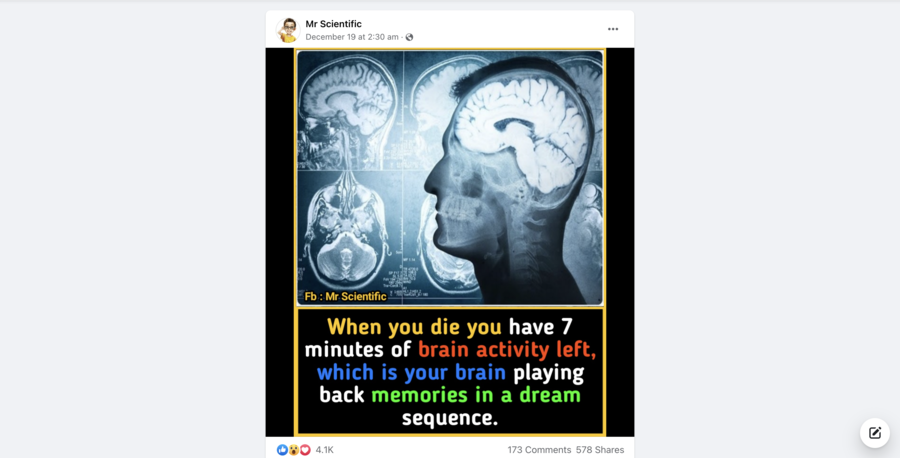 The post cites no source or evidence to substantiate its claim, nor does it account for cases in which the brain is severely damaged or destroyed physically, as in an accident.

According to a WebMD article titled, "Does Your Brain Know When You're Dead?" written by Matt McMillen and medically reviewed by Dr. Hansa D. Bhargava, researchers say when the heart stops, the brain stops.

Dr. Sam Parnia, a director of critical care and resuscitation researcher at New York University Langone in New York City, told WebMD that in the context of cardiac arrest, there is no blood going to the brain and it shuts down immediately. The brain cannot register activity without blood flow.

A Google search of "Mr Scientific" shows that he's most known for a YouTube channel with the same name with 1.06 million subscribers. He posts videos that have to do with space, technology and scientific figures consisting of text, ambient music and stock photos. The viewer never sees or hears from Mr Scientific. There are no sources for the claims in his YouTube videos or Facebook posts.