Did former Vice President Dick Cheney get arrested on Christmas Eve in 2021? No, that's not true: A Pentagon representative told us the claim is false. There is also no evidence online from any reputable news outlet that he was arrested. Also, the claim was posted on a self-described satire website with no verifiable confirming evidence.

The story originated in a Real Raw News article (archived here) on December 28, 2021, under the headline "Dick Cheney Arrested." The article opened:

Disgraced former Vice President Dick Cheney was arrested Christmas Eve while trying to discretely reenter the United States to spend the holiday with his daughters--Liz and Mary-at the latter's home in Virginia, said a Judge Advocate General's Corps representative speaking under terms of anonymity. 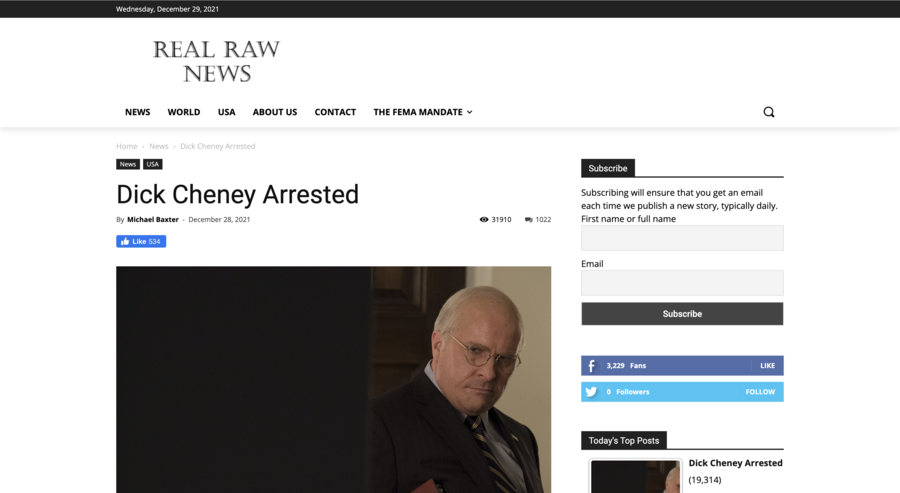 The article continued, "As Real Raw News reported previously, the 9/11 mastermind had on 11 November fled the U.S. for New Zealand after discovering, apparently, that he, like his former boss George W. Bush, was the target of a military arrest warrant. Bush was apprehended that night, but Cheney had a sophisticated escape and evasion plan that aided his getaway."

Lead Stories did a Google search of the phrase "Dick Cheney arrested" to find no reputable sources writing a story about the former vice president being arrested on Christmas Eve in 2021.

The picture Real Raw News used to accompany this article is not even a real picture of Cheney. It's a still from the movie, "Vice," a 2018 biopic about the former VP. Cheney was played by actor Christian Bale.

Lead Stories emailed the Pentagon to verify the arrest claim. An on-duty officer from the Pentagon replied December 29, 2021, with "That claim is false."