Is the omicron variant of COVID-19 spreading faster than any virus in history? No, that's not true: The omicron variant is extremely contagious but does not spread as quickly as measles, which is the most infectious virus. Dr. Claudia Hoyen at University Hospitals in Cleveland said during a December 21, 2021, news conference that "Omicron is the second most contagious virus on the planet."

The claim attributed to Microsoft co-founder Bill Gates appeared in a Facebook post (archived here) on December 25, 2021. It says: 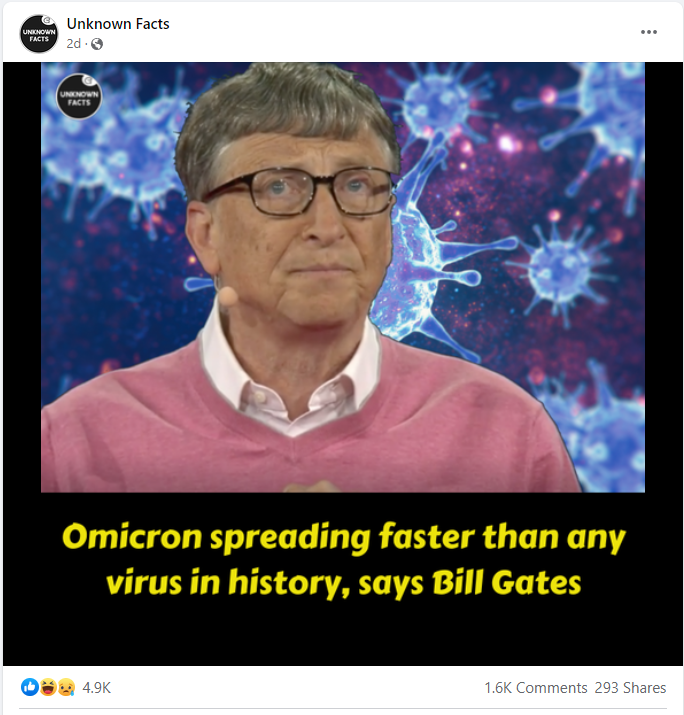 The quote by Gates originally appeared in a post to his verified Twitter account (archived here). It's part of a string of tweets he made on December 21, 2021:

Omicron is spreading faster than any virus in history. It will soon be in every country in the world.

Gates is not a public health expert but often speaks on behalf of the Bill and Melinda Gates Foundation, which has a global health program. While his statement wasn't quite on the mark, he wasn't far off either.

At the December 21, 2021, news conference, Hoyen with University Hospitals in Cleveland said the omicron variant was more contagious than delta, which was more infectious than the original COVID-19 virus:

The thing to know about this variant is that it is so much more contagious. When we look at the factors surrounding how contagious these viruses can be, the most contagious virus we think of is measles. That has a factor of about 18. This new variant of COVID-19 has a factor of 15. So, it is the second-most contagious virus on the planet currently, and so, it's just very important for people to understand that we are in a much different position than we actually even were two weeks ago.

The factor Hoyen refers to is known as the R-value. An R of 2 means that each sick person infects two new people, on average, in an unprotected population (no vaccines, masks or other proven methods of prevention), according to the Nebraska Medicine website. With an estimated R-value of 15, a person with omicron would infect an average of 15 new people. The original COVID-19 virus had an R-value of 1.5 to 3.5, according to the University of Michigan School of Public Health.

In a December 28, 2021, email to Lead Stories, the World Health Organization (WHO) said it doesn't have information corroborating whether omicron is spreading faster than any other epidemic in human history, but it does know this:

The growth rate of Omicron is indeed among the highest we have ever witnessed. It's higher than for measles which many would consider as a virus that spreads very fast in populations, higher than most other recent epidemic pathogens one could think of, and it's a higher growth rate than ever seen in this pandemic.

According to the WHO, the growth rate is a function of the reproduction number and the generation time (serial interval). So, you can have pathogens with a likely higher R-value (e.g. measles) but that will spread slower in the population because of the longer time between two generations of infections. For measles, it's around 12 to 14 days. For omicron, it's estimated at 1.5 to 3 days but that could change as scientists learn more about it.

The omicron variant has spread rapidly in the United States. On December 20, 2021, the Centers for Disease Control and Prevention said it had become the most dominant strain in the United States, accounting for over 73% of new coronavirus cases less than three weeks after it was first reported in the country. The CDC website says its scientists are trying to follow the trajectory of the fast-moving omicron wave as they continue to learn about the variant:

Results from scenario analyses indicate that current increases in Omicron cases are likely to lead to a national surge in the coming weeks with peak daily numbers of new infections that could exceed previous peaks; these scenarios may be realized as soon as January. In scenarios with lower immune evasion, a surge is still likely, but the peak could be lower and begin as late as April 2022.

Public health officials face many uncertainties with the new variant. In a December 20, 2021, update, the CDC said the agency isn't sure about the severity of the illness it causes, or how well available vaccines and medications work against it:

More data are needed to know if Omicron infections, and especially reinfections and breakthrough infections in people who are fully vaccinated, cause more severe illness or death than infection with other variants.

Current vaccines are expected to protect against severe illness, hospitalizations, and deaths due to infection with the Omicron variant. However, breakthrough infections in people who are fully vaccinated are likely to occur. With other variants, like Delta, vaccines have remained effective at preventing severe illness, hospitalizations, and death. The recent emergence of Omicron further emphasizes the importance of vaccination and boosters.