Do the ship's logs of the USS Constitution reveal that the sailors on board had consumed a tremendous amount of alcohol in about seven months' time from July 27, 1798, to February 20, 1799? No, that's not true: Although this story sounds very factual, citing specific dates and volumes of provisions as the narrative takes a long route on the way to the punchline -- to make a joke about how much alcohol Navy sailors can drink -- it is not a true story.

This USS Constitution tale predates the internet. One early version appears in print in a 1971 book about oceanographic ships. Online, the story circulated in email forwards and Navy humor websites (here, here and here). One example of the story appears in a Facebook post on December 6, 2021. It opened:

The U.S.S. Constitution (Old Ironsides), as a combat vessel, carried 48,600 gallons of fresh water for her crew of 475 officers and men. This was sufficient to last six months of sustained operations at sea. She carried no evaporators (i.e. fresh water distillers). However, let it be noted that according to her ship's log, "On July 27, 1798, the U.S.S. Constitution sailed from Boston with a full complement of 475 officers and men, 48,600 gallons of fresh water, 7,400 cannon shot, 11,600 pounds of black powder and 79,400 gallons of rum."

Her mission: 'To destroy and harass English shipping.' 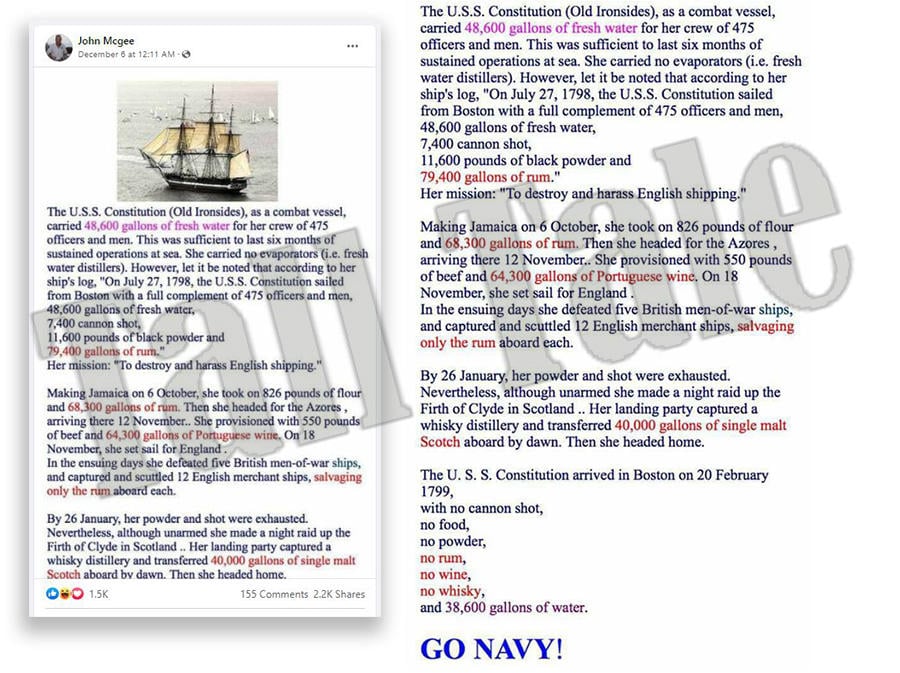 This tale has been debunked several times over the years, in 2017 by Snopes, in 2010 by the Hampton Roads Naval Museum and in 2013 the USS Constitution Museum posted a blog article titled, "Capsizing the Grog Tub: Busting a Favorite Myth." This thorough debunking hinges on two different questions, that of human biology and the amount of alcohol that a single human might be able to consume (not 1.8 gallons of spirits per day, as the article calculates) and where the ship actually was during the timeframe listed in the meme:

The story is completely at odds with the ship's operational history during this period. Constitution sailed from Boston on the evening of July 22, 1798, with orders to cruise between Cape Henry, Virginia, and Charleston, South Carolina. On October 6, the ship was at Hampton Roads, Virginia, very far away from Jamaica. (Jamaica, by the way, was the headquarters of the British West India squadron, a strange place to steer for if one were at war with them). By November 12, Constitution lay at anchor in Boston Harbor, having just returned from a largely uninteresting first cruise. The ship was still there on the 18th, but finally sailed again for the Caribbean on December 29. On January 26, 1799, Constitution was heading for Prince Rupert's Bay, Dominica, to repair the injured foremast-not launching a foray into the Firth of Clyde. On February 20, Captain Samuel Nicholson and his crew were patrolling the waters off Guadeloupe, not enjoying a happy homecoming.

The article finishes by explaining that the story may have been passed along by a man named Harold Peterson:

The Museum has tried to track down the origins of this fable, but the farthest back we have traced it is to the National Park curator and author Harold Peterson in the 1950s. And yet, given Peterson's impeccable reputation as a careful scholar, it seems improbably that he invented the story.

A 1971 book by Stewart B. Nelson published by Office of the Oceanographer of the Navy, titled, "Oceanographic Ships, Fore and Aft" (archived here) contains this story as a descriptive anecdote. Its purpose is to suggest that the USS Constitution's 1811 survey of the New London Harbor seems to have been conducted by a similarly "happy crew" as the one in the story Peterson told in a lecture he called, "Our Alcoholic Ancestors."

Peterson's story, as printed in the book, is almost identical to the Facebook post, except for a very important detail -- the years are not the same. Although both versions refer to an October 6 and November 18, the story in the book says the ship set sail on August 23, 1779 and arrived back in Boston harbor on February 20, 1780. These dates would place the timing of this voyage during the American Revolutionary War, but add an element of practical joking to this earlier edition of the story -- since the USS Constitution was not successfully launched until October 21, 1797.