Were several world leaders photographed in meetings with aliens? No, that's not true: This collection of edited photos do not all come from the same source, but all have clear clues that they are fabricated and that none of the scenes are real. 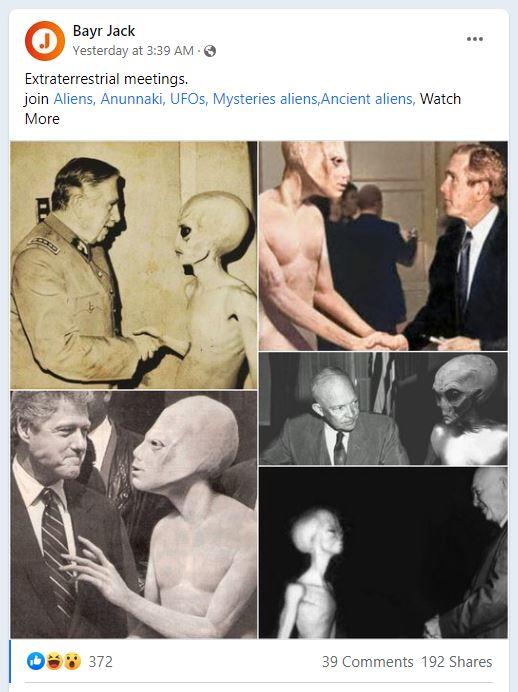 The photo in the upper left shows Augusto Pinochet, army general and the former dictator of Chile. In the original photo hosted on Wikimedia Commons, and attributed to the Biblioteca del Congreso Nacional de Chile, Pinochet was shaking hands with William Thayer Arteaga, a Chilean politician.

The lower left photo shows a manipulated photo of Bill Clinton that was taken when he was campaigning for president in March 1992. The fictional alien, named P'Lod (from Planet Zeeban), was a recurring character in Weekly World News Tabloid stories. The Weekly World News was a tabloid newspaper published from 1979 to 2007 that was famous for its outlandish headlines and fictional stories. Although no longer published in print, they still maintain a website.

Fictional P'Lod had a knack for supporting winning presidential candidates; he also backed Arnold Schwarzenegger for governor of California in 2003. This photograph, and what happened to it after it had an alien added to it, was the center of a 1998 lawsuit, Bruce v. Weekly World News, Inc. Below is a portion of the findings of fact listed in the lawsuit:

In March of 1992, Douglas Bruce, a freelance professional photographer, snapped a picture of presidential candidate Bill Clinton in a characteristically affable pose, gripping the hand of an unidentified Secret Service agent. Bruce consigned the photo to the Picture Group, a now defunct Rhode Island photo stock agency. In June of 1992, Susan Chappell, a photo editor at WWN, telephoned Jonathan Yonan, a Picture Group researcher, seeking a photo of Clinton shaking hands. Yonan supplied Chappel with Bruce's photo among others. Chappell told Yonan that she liked the photo and that WWN wanted to manipulate it by cropping the background and superimposing the image of the Space Alien to give the appearance of a tête-à-tête with Clinton. After Bruce agreed to the alteration of the photo, Yonan called Chappell to discuss a licensing fee. To Yonan's surprise, Chappell told him that WWN had already retouched the photo.

A secondary image named "Clinton Holding Cover" in the lawsuit was taken by an unknown photographer. This image showed Bill Clinton holding a copy of the August 11, 1992, Weekly World News that featured the fabricated image of himself shaking hands with P'Lod. This image of "Clinton Holding Cover" appears as a small inset in another famous edition of Weekly World News, when in the May 9, 2000, edition the P'Lod character gave an "endorsement" to George W. Bush. As Clinton had, George Bush also posed with the edition of the tabloid featuring the alien endorsement, in the Associated Press photo by Eric Draper. Lead Stories was able to find a TinEye thumbnail image of the Adobe Stock image of the original photo of the unaltered handshake with George W. Bush. It appears the altered photo of the P'Lod/Bush handshake appearing in the Facebook post was colorized from the black-and-white tabloid cover.

Below is an image showing the collection of manipulated alien photos from the Facebook post (outlined in red), and original and contextual photos adjacent for comparison. 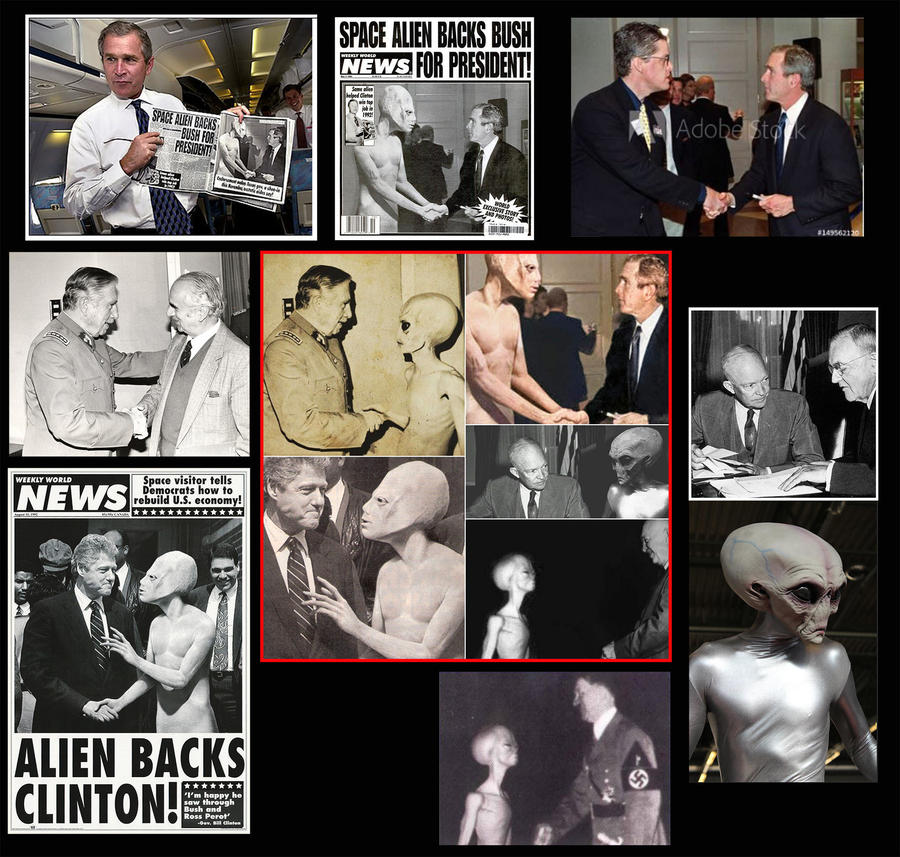 The photo of President Dwight Eisenhower can be found on allposters.com titled, "Dwight Eisenhower (With John Foster Dulles, 1956) Poster." The image of the alien that was added in place of Dulles is a grey alien costume that can be seen here and here. The picture was reversed and desaturated to make it blend with the original black and white photo.

The last photo in the lower right corner was crudely edited and the background has been colored in black. Lead Stories was unable to find the original image, but did find the same alien appearing in an additional edited image with who appears to be Adolf Hitler. Lead Stories was unable to locate the source of the Hitler photo but that edited image dates back to at least 2008.