Can you declare yourself not a U.S. citizen to avoid paying taxes to the IRS? No, that's not true: The U.S. Constitution and the Internal Revenue Code clearly define citizenship and how a "person" is defined for tax purposes. The tactic is used by several groups, including the "sovereign citizen" movement. The FBI calls its followers "anti-government extremists who believe that even though they physically reside in this country, they are separate or 'sovereign' from the United States."

The claim appears in a video (archived here) published to Facebook on October 25, 2021, under the title "I AM MAN." It's on TikTok. In the video, a man wearing colorful blacklight makeup quotes a passage in a book that appears on the other half of the split screen:

So, check this out. This is what they don't want you to know. I am not a citizen of the United States Corporation, therefore I am not an employee of United States Inc., who is subject to the statues and regulations defined in the IRS code, which only, only, only apply to U.S. contract employees. 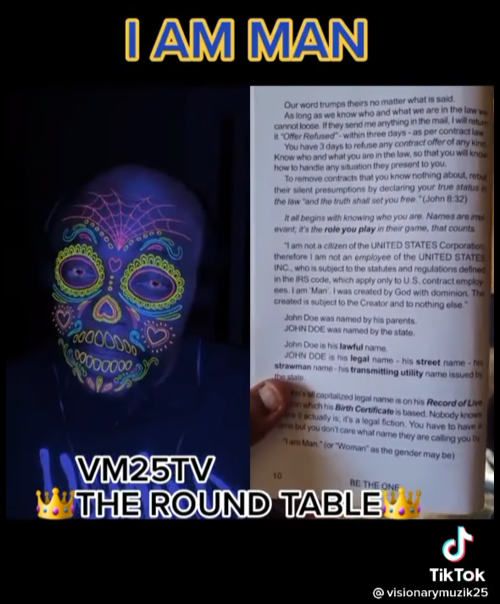 The passage the man quotes in the video is longer in the book. It says:

The IRS tackles the reasoning in The Truth About Frivolous Arguments section of its website:

In a variation of this argument, taxpayers argue that although they are citizens of the United States, for the purposes of the Internal Revenue Code they are non-resident aliens and are subject to taxation only on income that is connected with the conduct of a trade or business. The 11th Circuit rejected this contention as frivolous.

In another section of The Truth About Frivolous Arguments web page, the IRS says this:

Contention: Taxpayer is not a 'person' as defined by the Internal Revenue Code, thus is not subject to the federal income tax laws.

Some individuals and groups maintain that they are not a 'person' as defined by the Internal Revenue Code, and thus not subject to the federal income tax laws. This argument is based on a tortured misreading of the Code. In a variation of this argument, some individuals and groups argue that IRS correspondences addressed to taxpayers in all CAPITAL LETTERS are not valid. Proponents of this argument claim there is a legal distinction under state law that entities such as corporations are legally addressed in this manner and since taxpayers are not 'fictional legal entities,' the correspondence is not valid.

The Law: The Internal Revenue Code clearly defines 'person' and sets forth which persons are subject to federal taxes. Section 7701(a)(14) defines 'taxpayer' as any person subject to any internal revenue tax and section 7701(a)(1) defines 'person' to include an individual, trust, estate, partnership, or corporation. Arguments that an individual is not a 'person' within the meaning of the Internal Revenue Code have been uniformly rejected. A similar argument with respect to the term 'individual' has also been rejected. The IRS has warned taxpayers of the consequences of making this frivolous argument. Rev. Rul. 2007-22, 2007-1 C.B. 866; Notice 2010-33, 2010-17 I.R.B. 609.