Are doctors in Western countries being arrested for prescribing ivermectin? No, that's not true: Representatives of the American Medical Association, the Federation of State Medical Boards and Health Canada said they knew of no health professionals who had been arrested for authorizing the use of the antiparasitic medication, which has been promoted by the anti-vaccination movement as a treatment for COVID-19. According to the U.S. Food and Drug Administration (FDA), ivermectin is only approved for human use to treat infections caused by some parasitic worms and head lice plus skin conditions like rosacea.

The claim appeared in a Facebook post (archived here) published on January 30, 2022, under the title "AT AN AIRPORT IN MEXICO..." It opened:

Reminder: In places like Mexico and India etc Ivermectin is available everywhere over the counter, In western countries doctors are being arrested for prescribing it.. #TrustTheScience #NoNotThatScience 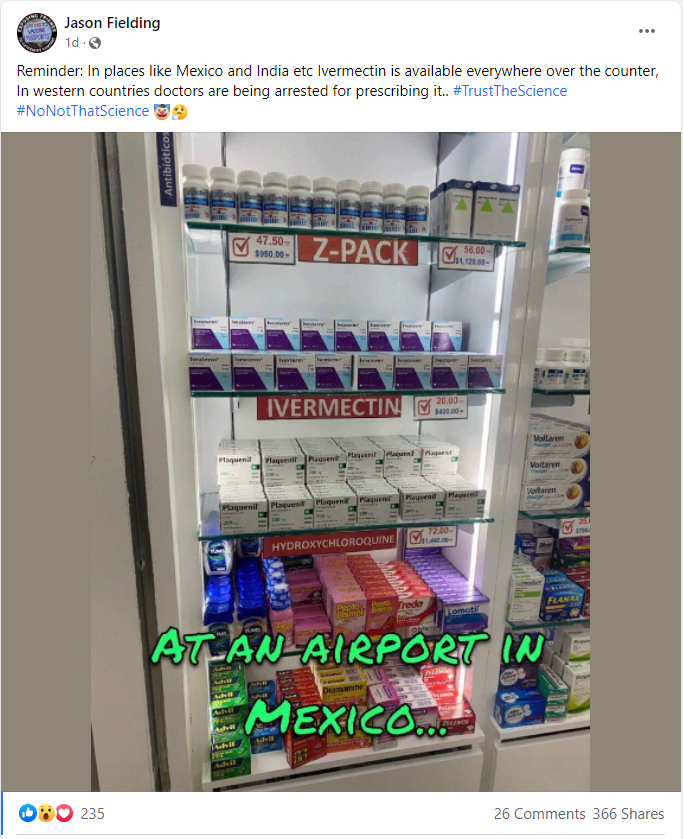 It's unclear where the photo showing ivermectin on a shelf with other medicines was taken. There's no way of knowing whether it was taken "AT AN AIRPORT IN MEXICO..." as the meme suggests, although the prices shown do appear to be in pesos and show an accurate conversion into U.S. dollars. The same symbol used as a dollar sign in the United States is also used for the peso in Mexico. A Google reverse image search done by Lead Stories shows the image being used by a variety of anti-vaccination groups and individuals but the search provided no clues to its origin.

No doctors in Western countries have been arrested for prescribing ivermectin, according to government agencies and health organizations contacted by Lead Stories. In a January 31, 2022, email, the American Medical Association (AMA) said:

No arrest of a US doctor on charges of ivermectin prescribing have been brought to the AMA's attention.

Lead Stories did reach out to the FSMB and got this response in a January 31, 2022, email:

To our knowledge, no physician has been arrested for prescribing Ivermectin.

The same held true in America's neighbor to the north. Health Canada, the department of the Canadian government responsible for national health policy, said this in another January 31, 2022, email to Lead Stories:

As far as we know, no health professional was arrested in Canada for prescribing ivermectin. ...

Health Canada issued a public health notice in October 2021: Ivermectin not authorized to prevent or treat COVID-19; may cause serious health problems.

There was one widely circulated report of a French doctor being arrested for prescribing ivermectin, but it turned out to be false. The doctor, Dr. Jean-Paul Théron, was arrested in September 2021 for assaulting law enforcement authorities, according to the public prosecutor in French Polynesia (stories here and here).

Ivermectin is a widely prescribed medicine around the world. Ivermectin tablets are approved by the FDA to treat certain infections caused by internal and external parasites. In addition, some topical forms of ivermectin are approved to treat external parasites like head lice and for skin conditions such as rosacea. The drug is not approved to treat any viral infection. On August 26, 2021, the Centers for Disease Control and Prevention issued an official health alert: