Have genetic engineers genetically modified food that intentionally will cause black people to become infertile? No, that's not true: According to an FDA spokesperson, "there is no scientific data" backing up this claim. The spokesperson also told Lead Stories that if the Food and Drug Administration had found someone doing this, it would be in violation of the Federal Food, Drug, and Cosmetic Act and those practices would be stopped. The executive director of the Genetics and Genomics Academy at North Carolina State University told Lead Stories that RNA crossing bodily membranes from the digestive tract to the reproductive tract is highly unlikely.

The claim appeared in a Facebook post (archived here) with a video on December 29, 2021. The video opened:

I am the lab science director. I know a thing or two about food science. Now what they have invented, when I say they, I'm talking about the genetic engineers. Not only have they found a way to put these genetically engineered traits into food crops, they've now found a way to cause food crops to grow RNA fragments that can be specifically targeted like bioweapons to interfere with physiological processes of targeted species that might eat the food.

The person claiming to be a food scientist in the video does not identify himself or where supposedly he works. 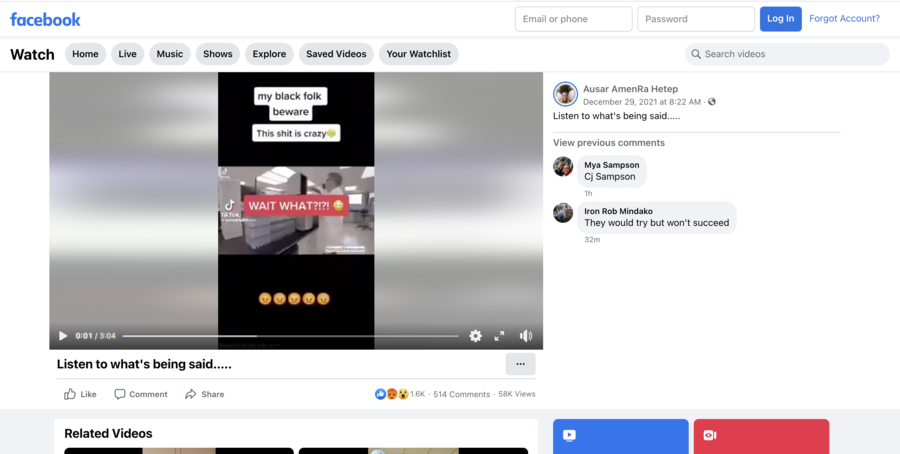 Now what's disturbing about this is that this technology can be fine-tuned to target a specific race of humans who eat the food. I want you to follow me very carefully on this because most people have never heard of this before, they've never heard of this technology, they don't know that it can be targeted by race. Food crops can be engineered right now based on existing technology to cause infertility in black people alone.

Lead Stories reached out to the FDA for a comment on this claim. They responded to our inquiry in a January 20, 2022, email:

This claim is not accurate. There is no scientific data demonstrating that consuming foods derived from genetically engineered plants or animals, including those developed through the use of RNA technology, cause infertility.

The FDA is not aware of anyone attempting to use any technology, including RNA technology, to modify foods to cause infertility in humans. That would be a violation of the Federal Food, Drug, and Cosmetic Act (FD&C Act). As such, should the FDA become aware of such technology being used in this manner the agency would take the action to protect consumer health ...

Fred Gould, the executive director of the Genetics and Genomics Academy at North Carolina State University, told Lead Stories in a January 21, 2022, email that the claim that someone has engineered a specific type of RNA that would suppress fertility is highly unlikely. The RNA would have to be eaten, not be digested by the enzymes in the digestive tract and then cross membranes into the reproductive tract. Those are very harsh conditions for RNA and it would not be able to survive to make it to the reproductive tract.

Also, the idea that RNA could be targeted specifically at black people is even more unlikely, Gould said. From decades of research, geneticists know there are no genetic distinctions between black and white people. If the RNA could harm black people, it would harm white people too.