Is a 1927 news article saying that America was sold to five billionaires real? No, that's not true: This is a photo of a fake headline from a book published by The Onion, a website whose disclaimer says their content is "satirized."

The claim appeared in a Facebook post (archived here) on January 13, 2022. Above the image of an old newspaper page with the headline, "BILLIONAIRES BUY U.S. FROM MILLIONAIRES, Future of Nation in Yet Wealthier Hands," a block of text says:

This is a 1927 News Article Showing America was sold to 5 Billionaires. The Rothschild's, Rockefellers, DuPont's, Harriman's and Warburg's 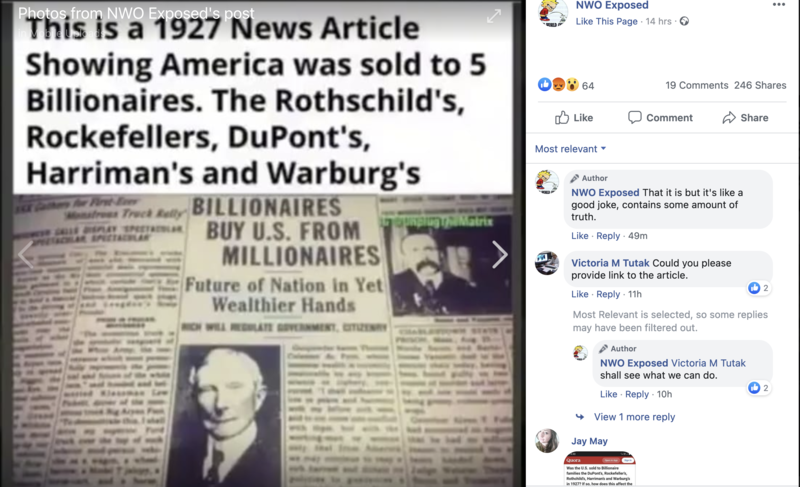 This March 10, 2019, tweet has a clearer image of the headline on what appears to be an old-style newspaper front page. "THE ONION," which appears as the newspaper name, is displayed and circled in orange.

The archived version of this headline, as it originally appeared on the website, can be seen here.

An online forum suggests that the article comes from a book by The Onion. An Amazon search revealed a March 23, 1999, print publication titled, "Our Dumb Century: The Onion Presents 100 Years of Headlines from America's Finest News Source."

The Onion's About page has a section that serves as a disclaimer titled, "What if I want to sue The Onion?" that reads:

Please do not do that. The First Amendment protects satire as a form of free speech and expression. The Onion uses invented names in all of its stories, except in cases where public figures are being satirized. Any other use of real names is accidental and coincidental. The Onion is not intended for readers under 18 years of age.

The Onion has also been identified as a satirical media company by several entities, including the U.S. Library of Congress:

The Onion is an American satirical digital media company and newspaper organization that publishes articles on international, national, and local news. The company is based in Chicago but originated as a weekly print publication on August 29, 1988 in Madison, Wisconsin. In 2013, The Onion ceased publishing its print edition.