Was Benji Stacy born in 1975 with dark blue skin that shocked his nurses? Yes, but this is not a picture of him. According to ABC News, infant Stacy did frighten maternity doctors and they quickly transferred him to the University of Kansas Medical Center. But this is a photo of Paul Karason, not Benji Stacy, and Karason's skin turned blue in adulthood and for different reasons.

The claim and photo appeared in a Facebook post on the Historical Pictures page on January 14, 2022, with the caption: "When Benjy Stacy was born in 1975, nurses were shocked by his dark blue skin ..." The caption continues:

... only to learn that he was descended from the Fugate Family of Kentucky that was famous for having blue skin. 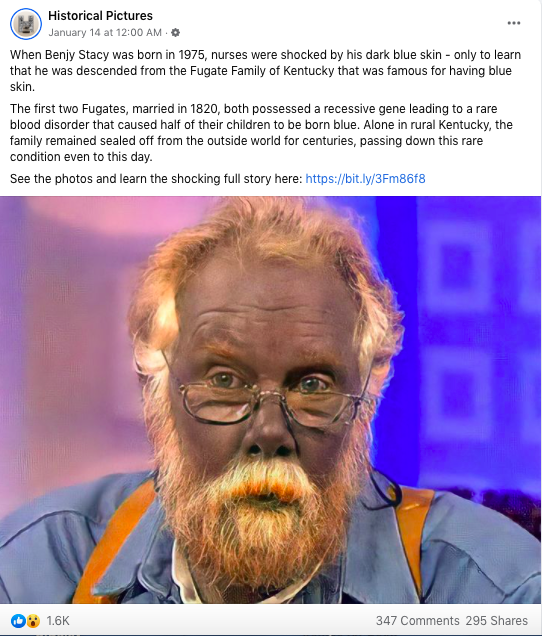 The photo of Karason appears to have been lifted from tape of a television interview on NBC News' Today Show with Matt Lauer on January 7, 2008, during which he explained what caused his skin to become dark blue. He started turning blue around 1993 after he began drinking a self-prepared, silver-based preparation to treat a dermatitis-like skin condition.

Silver has anti-bacterial effects but its use went out of favor after the invention of penicillin. The Food and Drug Administration banned its use in 1999 because it causes argyria, a condition named for the ancient Greek word for silver: argyros.

According to the Encyclopedia Britannica:

Nitrate of silver is eliminated from the system very slowly and the objection to its employment continuously as a drug is that it is deposited in the tissues causing argyria, chronic silver poisoning, of which the most prominent symptom is the dark slate-blue colour of the lips, cheeks, gums and later of the skin.

In the post where the image of Karason appears, there is also a link to an article that mentions the Fugate family, medically famous for a recessive gene that was passed down through generations, causing some family members' skin to have a bluish tinge. Doctors soon found out that Benjy Stacy is a Fugate. Relatives described his great-grandmother Luna Fugate as "blue all over," and "the bluest woman I ever saw."

According to NBC News, Karason was 62 when he passed away from a stroke in hospital in Washington state in September 2013, a week after suffering a heart attack. NBC reported that Karason's estranged wife said his blue skin was not the cause of his death.