Did scientists find blood from vegans is eight times more protective against cancer? No, that statement is misleading because it is missing context. This meme caption refers to a study done in 2005. The meme overstates the findings without identifying the almost 17-year-old study or clarifying that it focused on prostate cancer and did not look at all cancers.

A May 13, 2016, article in riseofthevegan.com discussed the 2005 study without making it clear that the study was already 11 years old. The petri dish meme, watermarked riseofthevegan.com, has been posted on social media since at least 2019. Sometimes the meme is shared with links pointing to alternate websites hosting similar or copied articles. One example was posted on Facebook on January 4, 2022. The link included in the comments points to a copy of a healthnutnews.com article recently posted on the website of a South African testing laboratory. The caption on the Facebook post reads:

Soon they'll be harvesting vegans for our Cancer-killing blood

We are so special

The text of the petri dish meme says: 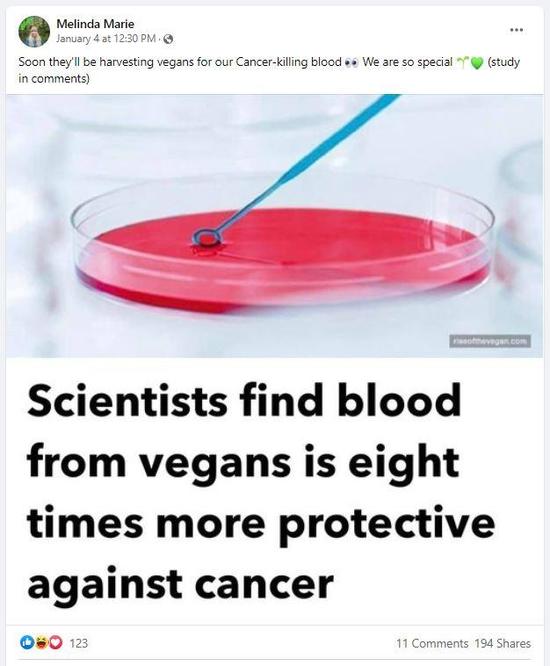 The scope of this fact check is not to prove or disprove the merits of a vegan, vegetarian or plant-based diet, it is to give the background that gave rise to the statement in the petri dish meme.

The July 15, 2016, healthnutnews.com article titled, "Study Finds Vegan Blood Is 8 Times More Effective At Killing Cancer Cells" begins with an announcement that sounds like the study was just released, but it was almost 11 years old at that time:

Yet another study has found that eating a vegan diet is incredibly healthful; scientists found that when compared to the blood of those who follow the Standard American Diet (or SAD), vegan blood is 8 times more effective at killing cancer cells.

The September 2005 study titled, "INTENSIVE LIFESTYLE CHANGES MAY AFFECT THE PROGRESSION OF PROSTATE CANCER" was published in the Journal of Urology. The study does not specify if any of the participants were already eating a vegetarian or vegan diet, but the vegan diet for the purposes of the study was adopted after the patients were diagnosed with prostate cancer.

Compared to the control group -- which didn't change their diet -- the study found that the blood serum of the patients assigned to the experiment group -- who a diet-and-lifestyle regimen -- was eight times as effective at inhibiting the growth of the laboratory prostate cancer cells.

The effects of exercise or diet alone were not controlled -- in the study, the experiment and control group both participated in an exercise and stress management lifestyle change. All the people in the study had prostate cancer at the outset. The study was not designed to discover if a vegan diet lowered the risk of getting prostate cancer. The study concluded:

These findings suggest that intensive changes in diet and lifestyle may beneficially affect the progression of early prostate cancer. Additional trials of such therapy appear warranted.