Did scientists prove that 93% of the people who died after being vaccinated for COVID-19 were killed by the vaccine? No, that's not true: The non-peer-reviewed paper by two scientists, Dr. Sucharit Bhakdi and Dr. Arne Burkhardt, provides no proof for its claims and uses a tiny sample size of just 15 people to draw its conclusions. A professional peer review is the customary process through which the methodology and conclusions in scholarly writings are challenged by professional peers, sometimes causing authors to restate their findings.

The claim appeared in a newsletter (archived here) published by Steve Kirsch to Substack on December 28, 2021, titled "Bhakdi/Burkhardt pathology results show 93% of people who died after being vaccinated were killed by the vaccine." It opens:

The vaccine was implicated in 93% of the deaths in the patients they examined. What's troubling is the coroner didn't implicate the vaccine in any of those deaths.

This is what Steve Kirsch's newsletter looked like on Substack on January 12, 2022: 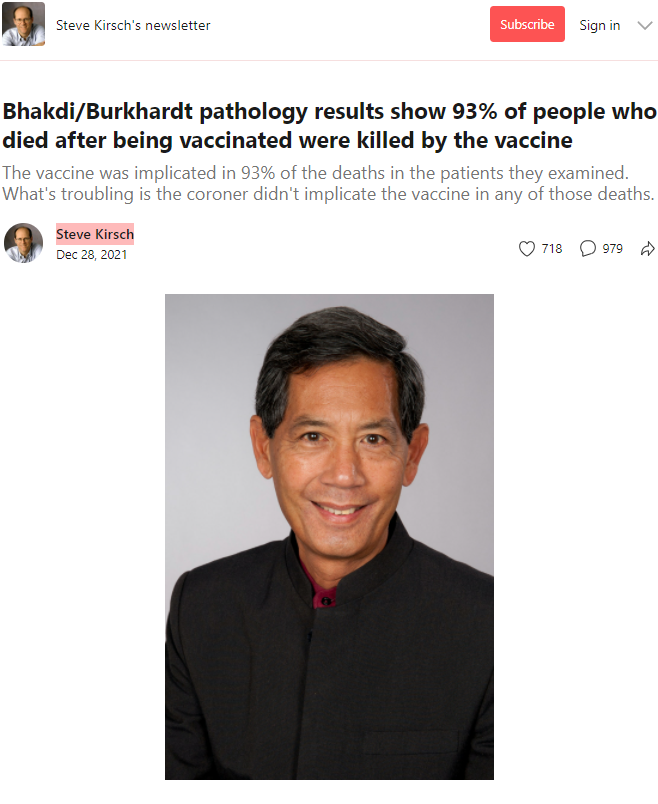 The Kirsch newsletter highlights a presentation made by Bhakdi and Burkhardt that was live-streamed at the Doctors for COVID Ethics Symposium on December 10, 2021. Their findings also appear in this non-peer-reviewed paper.

The paper calls its evidence that 93% of people who died after being vaccinated were killed by the vaccine "irrefutable." This is how the scientists begin building their case:

We herewith present scientific evidence that calls for an immediate stop of the use of gene-based COVID-19 vaccines. We first lay out why the agents cannot protect against viral infection. While no positive effects can be expected, we show that the vaccines can trigger self-destructive processes that lead to debilitating illness and death.

The paper explores the deaths of 15 people, ages 28 to 95, who died anywhere from seven days to six months after receiving their COVID vaccines: 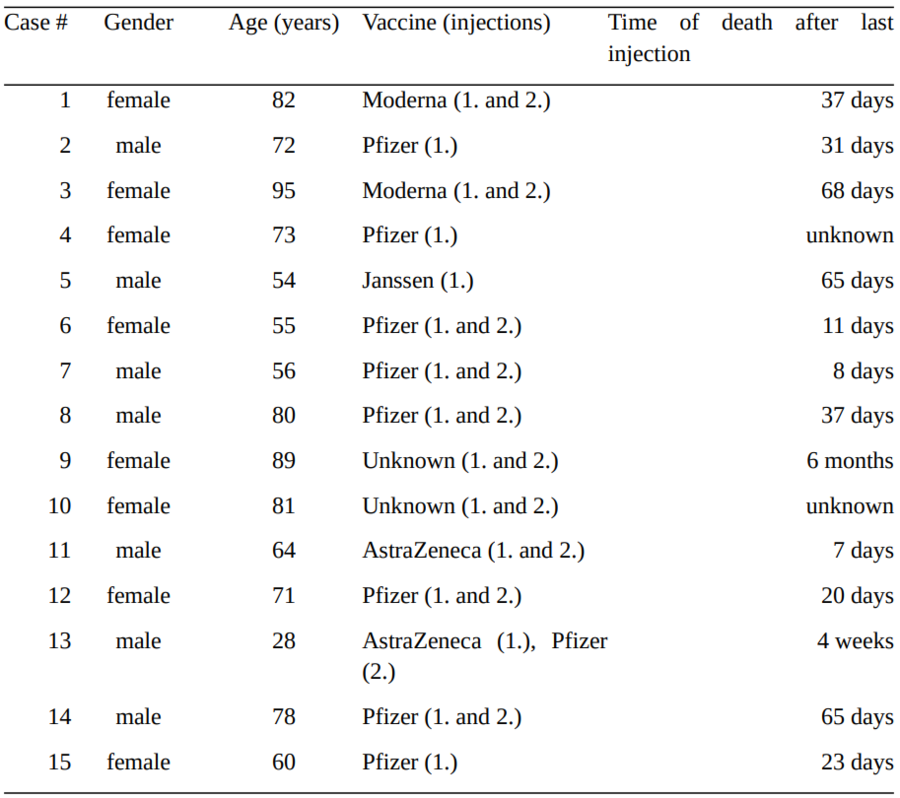 The scientists do not indicate where they got the information on the 15 individuals highlighted in their study or how they were selected. They do not name the coroner cited in their paper. No sourcing for the information is provided. It's not known if they were from a single country, 15 different ones or something in between.

The paper says a microscopic examination was performed on the organs of the 15 people. And through what they describe as their "autopsy findings," the scientists conclude that 14 of the 15 deaths (93%) were due to the COVID vaccine they received, suggesting the vaccines triggered their bodies to attack themselves. Here's what the paper's conclusion says:

Beyond any doubt, injection of gene-based COVID-19 vaccines places lives under threat of illness and death. We note that both mRNA and vector-based vaccines are represented among these cases, as are all four major manufacturers.

Lead Stories has previously debunked stories that claimed COVID vaccines were causing autoimmune disorders or diseases. Lead Stories has also refuted other claims by both Kirsch and Bhakdi.

Australia's Department of Health says there is no evidence to suggest that COVID-19 vaccines can cause autoimmune diseases.

The U.S. Food and Drug Administration (FDA) and Centers for Disease Control and Prevention (CDC) have reported no deaths and no autoimmune disease caused by the mRNA vaccines while carrying out what it says is the most intensive vaccine monitoring program in history:

To compare results, a tiny fraction of a percent of the 208 million fully vaccinated people in the United States (as of January 12, 2022) have deaths that can be directly linked to a COVID vaccine. The paper by Bhakdi and Burkhardt with a sample size of 15 people from somewhere in the world claimed that 93% had been killed by them.

The CDC says it will continue to closely monitor the safety of COVID-19 vaccines: