Did the president of Ukraine recently make it legal to preach the Gospel and did a crowd of hundreds of thousands gather to celebrate? No, that's not true: This photo shows a Ukrainian Thanksgiving celebration that took place on Khreshchatyk Street, the main street in Kiev, on September 17, 2017. This event also commemorated the 500th anniversary of the Protestant Reformation.

Then-Ukrainian President Petro Poroshenko had not "finally given liberty to preach the gospel" -- the Ukrainian constitution, in place since 1996, provides for freedom of religion and separation of church and state. A year earlier, on August 26, 2016, Poroshenko signed a decree supporting an initiative of the All-Ukrainian Council of Churches "On Celebrating the 500th Anniversary of the Reformation in Ukraine."

The event pictured in the photo occurred on September 17, 2017. Within weeks, Facebook posts (example here) appeared with a misleading caption. Periodically posts with that misleading caption and the 2017 photo resurface. One example of this is a post published by Heavenly Mandate on February 2, 2022, with the title, "Breaking News........." It was captioned:

Hundreds of Thousands Gather in the Streets of Ukraine to Praise the Name of Jesus, after the President finally gave liberty to preach the Gospel which was banned for so many years. The banner of Jesus Christ is lifted over every nation of the world! GLORY BE TO GOD

Dear Lord.
Let your Revival fire flow all over the world.
©NDEPO TV 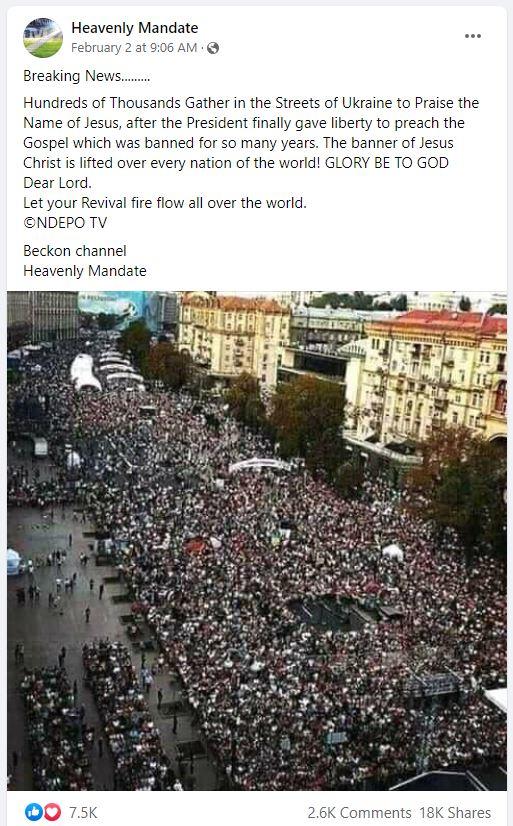 The Christian Broadcasting Network published an article on www1.cbn.com on September 21, 2017, titled, "Hundreds of Thousands Gather in the Streets of Ukraine to Praise the Name of Jesus." This article estimates there were roughly 200,000 people in attendance and described a gathering with music, play zones and guest speakers. It also contains a sentence that may have resulted in the confusion:

The gathering came after Ukrainian president Petro Poroshenko signed an order recognizing the anniversary of the Reformation.

The gathering did come after the President Poroshenko signed a decree -- almost a full year after, but the decree he signed was not to lift a ban on preaching. The official website of the president of Ukraine (archived here) reported on August 26, 2016, "The President signed the Decree 'On the celebration of the 500th anniversary of the Reformation in Ukraine'":

The President of Ukraine supported the initiative of the All-Ukrainian Council of Churches and signed the Decree 'On Celebrating the 500th Anniversary of the Reformation in Ukraine.' The signing took place during a meeting with the leaders of authoritative Ukrainian and international Protestant associations, who gathered in Kiev to hold the Second Missionary Forum of the All-Ukrainian Union of Churches of Evangelical Christian Baptists.

The President welcomed the holding of the forum and noted the importance of the decree, which should demonstrate the position of the authorities in supporting Protestant religious organizations.

An annual report on the status of religious freedom in every country is submitted to Congress by the U.S. Department of State. The 36-page document, "Ukraine 2017 International Religious Freedom Report," gives a picture of the relevant issues facing various religious groups at the time. The gathering in the photo is described on page 20 in the report:

Lead Stories was unable to find agreement on the estimated crowd size in media reports. The largest estimate we found, by far, is from Australian motivational speaker Nick Vujicic, who claimed in a Facebook video for Life Without Limbs that there were 800,000 people gathered. A September 18, 2017, article in the Ukrainian publication "Newsroom" described Vujicic's speech as the "main event" and estimated the crowd between 10,000 and 100,000. Other reports put the crowd size between 160,000 and 200,000.