44% of Black People are HIV POSITIVE. YALL BE SAFE, AND BE RESPONSIBLE 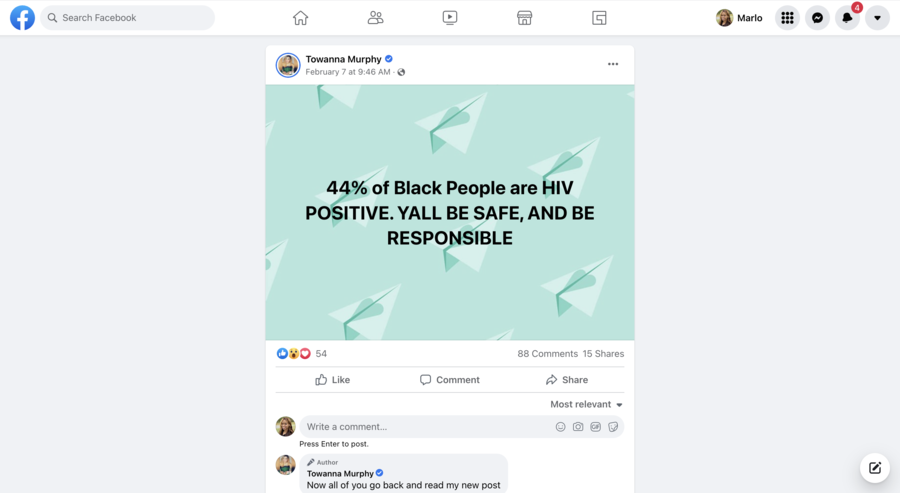 It's possible that the author of the post misinterpreted the following statistic from the U.S. Department of Health and Human Services: "Although Black/African Americans represent almost 13 percent of the U.S. population, they account for 42.1 percent of HIV infection cases in 2019." That statistic was for one specific year, and it was for a percentage of cases, not for a percentage within a total poulation.

There are 47 million African Americans in the United States, according to the U.S. Census Bureau. If this Facebook post was correct, that would mean almost 21 million African Americans would have HIV. That's more than every American who has HIV, according to HIV.gov. The total number of people who have HIV in the U.S. is estimated to be 1.2 million.

There are 7.9 billion people in the world, Census.gov says. If 44% of the world population had HIV, that would be around 3.4 billion people. Worldwide, "approximately 38 million people are currently living with HIV" (as of March 2, 2021), the Kaiser Family Foundation says.

While this post doesn't specify Americans, not all countries have a race-based census, according to the Population Reference Bureau in a February 11, 2022, phone call. It would be difficult to find out how many Black people exist around the world right now, then calculate how many Black people have HIV. This fact check is based on the U.S. Census data.