Does this video show the first day of an authentic hearing before an international court with recognized and enforceable power to convene a grand jury weighing criminal charges? No, that's not true: It's a fake court proceeding. Although the video shows what looks like a courtroom in which a licensed lawyer summarizes what his "witnesses" will later tell "jurors" about "the other side" and urges that they "recommend indictments," no government recognizes the "World Criminal Court" referred to in the video's captions. It is a fictional organization and not the real International Criminal Court, located in The Hague, Netherlands.

The video of the fake hearing was posted on multiple platforms, including this February 6, 2022, BitChute version (archived here) captioned "YOU WANT THE TRUTH? HERE IT IS !! GRAND JURY TRIAL BEGINS INTO CRIMES AGAINST HUMANITY - DAY 1." It opened:

This is a small part of the Main Video. Most people struggle to watch 20 minutes let alone the full 90 minutes. The Grand Jury of the World Criminal Court begins Investigation into Crimes Against Humanity - DAY 1 This video shows attorney Reiner...

YOU WANT THE TRUTH? HERE IT IS !! GRAND JURY TRIAL BEGINS INTO CRIMES AGAINST HUMANITY - DAY 1

This is a small part of the Main Video. Most people struggle to watch 20 minutes let alone the full 90 minutes. The Grand Jury of the World Criminal Court begins Investigation into Crimes Against Humanity - DAY 1 This video shows attorney Reiner...

The docket of the International Criminal Court at the Hague lists no such case against the defendants named by Reiner Fuellmich, the lawyer making the fake opening statement. Fuellmich is an attorney licensed in California with an office address in Göttingen, Germany. Fuellmich's law firm's website says he practices consumer protection law and is prosecuting a crimes against humanity case against public health officials and others who have urged vaccination against COVID-19.

A spokesperson for the International Criminal Court at the Hague, when answering inquiries made for a prior debunk of a Fuellmich claim, emailed Lead Stories in December 2021 that outside lawyers like Fuellmich have no standing to act as prosecutors in the multinational court. They added that the court can only prosecute individuals and not institutions or states. The spokesperson said there is no case such as the one Fuellmich describes.

It is unclear if Fuellmich or the person adding Fuellmich's video to BitChute added the small logo in one corner that says "GRAND JURY" in large print over a small print: "The Court of Public Opinion." 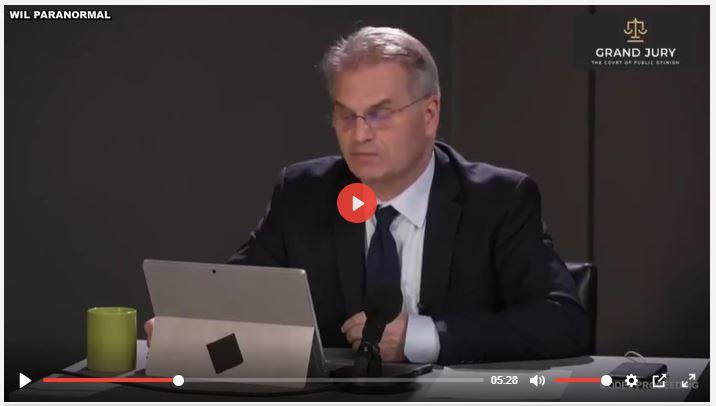 In his 18-minute opening statement, Fuellmich does not caution that the "hearing" is fake.

Lead Stories has debunked false claims by Fuellmich about COVID on 12 occasions prior to this (archived link to list of debunks here).

In researching one of the previous fact checks, Lead Stories wrote to the California State Bar to confirm California has licensed Fuellmich as an officer of the court and to learn if he has suffered any Bar sanctions for making false statements about COVID vaccines, about public health officials and for pretending to be a prosecutor in an international court's trial of "crimes against humanity."

By law, the State Bar of California cannot confirm whether there is an investigation or publicly release any possible complaints. However, all licensed attorneys in the state must adhere to the State Bar's rules and regulations, including Rule 8.4 (c): It is professional misconduct for a lawyer to engage in conduct involving dishonesty, fraud,* deceit, or reckless or intentional misrepresentation.