Does the United States import 206,000 barrels of oil a day from Russia, and did the U.S. stop domestic oil production? Not exactly: Although the U.S. did import 206,000 barrels of crude oil per day from Russia in October 2021, the U.S. produces the most crude oil in the world, importing less than 10 percent from Russia, which is not its biggest supplier. Additionally, an expert told Lead Stories that the importation figure does not reflect the state of crude oil and petroleum markets as a whole, in which Russia is only one supplier of dozens. The U.S. never completely stopped the domestic production of oil from federal lands, only stopping the signing of new oil and gas leases.

You know how it looks like we're going to war with Russia? Considering how we buy 206,000 barrels of oil a day from them, if I was running this country and had shut down domestic oil production a year ago, I'd be starting that up again pretty darn quick.
I wonder why we're not doing that. 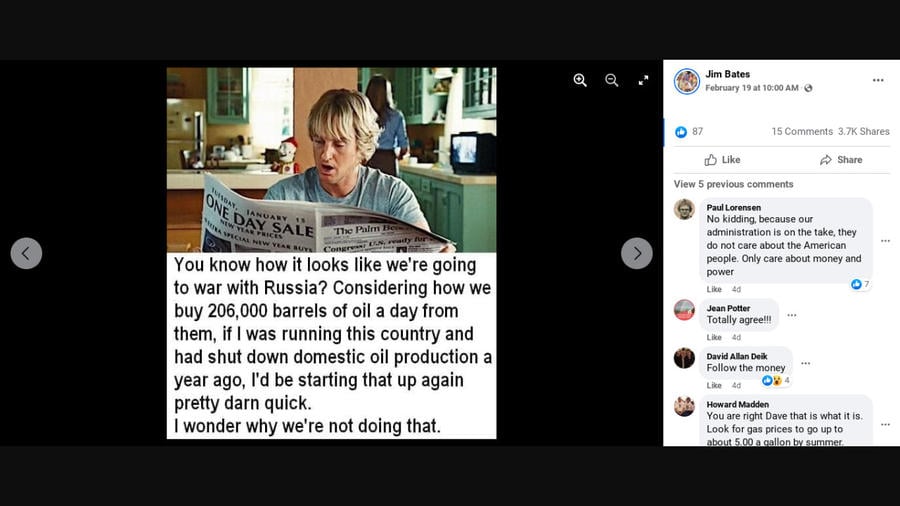 The Facebook post seems to use the two claims to make the argument that the U.S. should increase its oil production. However, the claims are based on misinterpretations of the state of the crude oil and petroleum product markets.

It is possible that the user claiming that the U.S. imports 206,000 barrels of oil per day from Russia retrieved that information from the October 2021 crude oil figure in a chart showing U.S. imports from Russia published by the U.S. Energy Information Administration (EIA):

However, Brian Prest, a fellow at Resources for the Future and an economist focusing on the environment and energy, told Lead Stories during a phone call on February 24, 2022, that this figure is not particularly relevant when discussing the crude oil market because the market is global:

What really matters is total global supply and total global demand and not necessarily the movements between any particular countries.

Behind Canada, Russia was in 2021 the distant #2 source of crude oil to the U.S, business analysts at Bloomberg report. That equals less than 10 percent of oil imports into the U.S.

Prest cited historical importation information from the EIA to demonstrate that crude oil importation from Russia frequently fluctuates and is not incredibly important when measuring the impact of an energy shortage. Prest said Russia's position as a global leader in crude oil production is more significant as the country is one of the top producers of crude oil in the world. As of 2020, Russia was only topped in crude oil production by the United States.

The second claim may have been made due to a misunderstanding of Executive Order 14008, which temporarily paused new oil and natural gas leasing on federally controlled land and offshore waters. This order was signed by President Joe Biden on January 27, 2021. Those petroleum products from federal lands are less than 10 percent of U.S. production.

However, companies with existing leases could and did continue to produce oil on federally controlled land after the implementation of the executive order. Prest referred Lead Stories to data from the Department of the Interior, the executive department that manages most federally controlled land. The screenshot below shows some of the data Prest referenced, indicating federal lands production has continued after Biden shut down new leasing:

This chart published by the EIA also shows that, contrary to the Facebook post claims, the U.S. did not completely stop the production of crude oil "a year ago." In an email to Lead Stories on February 24, 2022, Chris Higginbotham, who works in media relations at the EIA, said the EIA predicts that crude oil production in the U.S. will rise in 2022 and 2023.

The U.S. has not announced any plan to go to war with Russia at the time of writing. In response to Russia's military action against Ukraine, Biden announced several sanctions against Russia.