Do these documents, purportedly acquired by the Ministry of Defense of the Russian Federation, confirm that Kyiv was preparing an offensive operation against Donbas scheduled for March 2022? No, that's not true: Although there are no formal statements made by Ukrainian officials on whether the published papers are false or true, the papers in question do not describe a new operation against Donbas and appear to focus on operations 1,356 highway kilometers away, in Starychi.

Donbas, in eastern Ukraine, includes the two separatist regions Donetsk and Luhansk. The claim appeared in a March 9, 2022, tweet from the Ministry of Foreign Affairs of Russia with the caption: "❗ Classified documents." The caption continues:

(order by the Commander National Guard of Ukraine) acquired by @mod_russia confirm without a shadow of a doubt: the Kiev regime was covertly preparing an offensive operation against #Donbass, scheduled for March 2022. 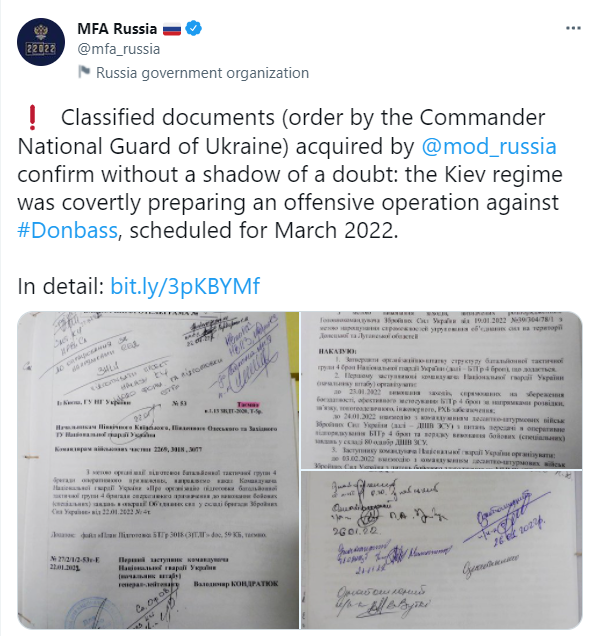 Photos of documents allegedly issued under the name of the Head Office of the National Guard of Ukraine were offered as proof of the Ministry of Foreign Affairs' claims. The posted papers contain the instructions for the battalion tactical group of the 4th Operational Brigade of the National Guard of Ukraine. The first page's paragraph says in Ukrainian:

Other pages contain orders to approve the structure of the battalion tactical group, to organize its interaction with other armed forces and to base it in Starychi, which is in the Lviv region in western Ukraine, 1,356 kilometers (842 miles) west of Donbas.

The document does not contain mentions of any new operation in Donbas. According to Ukraine's official Ministry of Defense website, the Joint Forces operation was held in 2018. It aimed at counteracting the activities of Russian and pro-Russian armed groups in eastern Ukraine.

The documents the Russian ministry posted include instructions for one tactical group of the 4th operational brigade (one of many) of the National Guard of Ukraine, which would not support the claim that a massive operation was prepared against Donbas.

Lead Stories contacted the National Guard of Ukraine via their official Facebook page. Their reply was that they cannot tell us whether the document was authentic: "... It should be checked." The Facebook message said the Russian foreign ministry's claims are "definitely fictional."