Were gas prices $9 a gallon at a Los Angeles gas station? No, that's not true: The image being used in social media posts is from a gas station in Stockton, California and not Los Angeles. But more importantly, the board showed a $9 (and up) price for all three unleaded levels plus diesel fuel only briefly when the sign was updated, local news station ABC 10 in Stockton reported. The average price of gas in California as of March 10, 2022, was $5.69, not anywhere near $9.

This is in LA.

The image showed the gas prices at an ARCO station with a Dutch Bros. coffee shop in the background. Going by the 1130 address on the Dutch Bros. building, it appears to be in Stockton, California.

The 360 Google Earth street view feature from the Dutch Bros. coffee shop at 1130 E. March Lane in Stockton shows an ARCO station across a parking lot. The palm trees and Dutch Bros. building seem to match the ones in the photograph that went viral.

An Arco store manager who spoke over the phone said that while the gas prices were never at $9 or above, the station's gas price sign did get an update recently which caused the prices to show up on the sign as $9 or more, briefly.

The update to the sign only lasted a few minutes, according to the manager, but during the update, the erroneous numbers showed up on the sign and people took photos.

Patrick De Haan, head of petroleum analysis at GasBuddy, told Lead Stories via email on March 9, 2022, that testing on signs is done via 1-cent increases. "This station appears to be testing its sign," he said. "Such pricing schemes where each grade is 1 cent higher is a common testing practice."

According to the American Automobile Association, the average gas price in California at the time of writing was $5.694 a gallon; the national average was $4.318 a gallon. 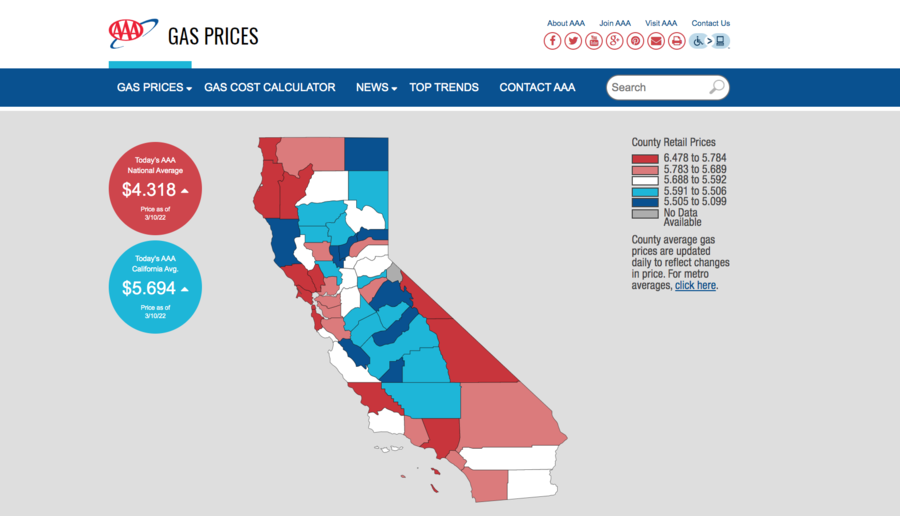 The average price of gas in San Joaquin valley, where Stockton is located, is $5.592, according to AAA.

Lead Stories has contacted ARCO Southwest for a comment and will update the story when a response is received.