Is this a picture of a cat, Mikael, "The panther of Kharkiv," trained by the Ukrainian army to spot Russian sniper laser dots and to signal where the sniper is? No, that's not true: While this cat may enjoy chasing a red dot, there is no evidence that this or any other cat has been trained to do the job described in this satirical post. Also, experts agree that laser sights are a fictional convention for movies, but are not practical for long-range sniper shooting.

The photo was originally posted on Twitter on July 25, 2018, by @uaarmy_animals. The photo was posted on Twitter again by R. Monzon on February 27, 2022, with a different caption, inventing the legend of "The panther of Kharkiv." Screenshots of that tweet and others have been posted on Facebook, like this example by Being Libertarian on March 1, 2022.

The text in the Facebook screenshot was cut off. The full caption in R. Monzon's tweet said:

R. Monzon _ @ 11:11 @No... .14h
#Ukraine army cats are trained to spot and direct the location of #Russiansniper laser dots. This is Mikael 'The panther of Kharkiv' who single handed exposed the location of 4 Snipers which ended in their deaths. #RussiaUkraineWar #invasionofUkraine #Putin #VolodymyrZelensky 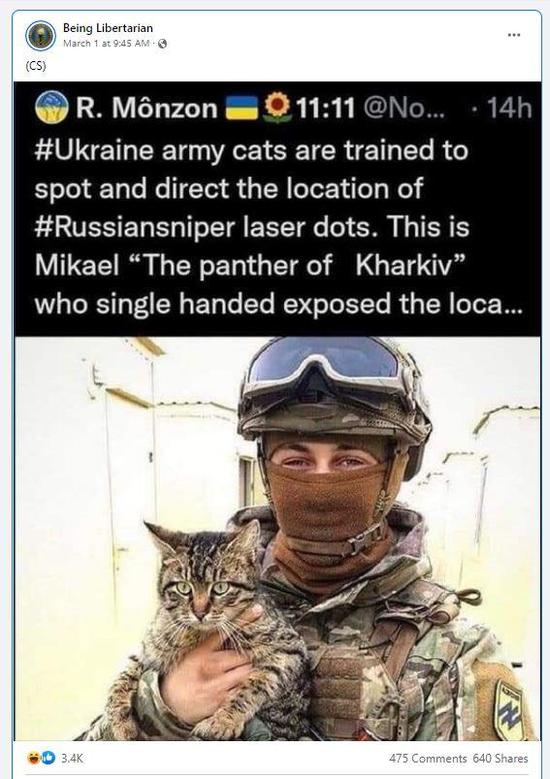 When this photo was first posted by the UkrARMY cats & dogs account on July 25, 2018 (archived here), the caption read:

Laser sights are a device that are useful and dramatic in movies, but not practical in real-world applications on long-distance targets. The website tvtropes.org has a page dedicated to the dramatic effect of the laser sight. Benjamin Sobieck, the author of "The Writer's Guide To Weapons," explains why fiction writers should avoid including laser sights on the weapons of the snipers in their stories in a March 3, 2016, blog post on crimefictionbook.com. Sobieck explains laser sights function in low light and at shorter distances but would not be a choice for a sniper:

Unlike the perfectly flat trajectory of a laser, bullets will eventually drop back to Earth. Over a distance, the shooter will have to compensate by placing the red dot higher on the target. At that point, it makes much more sense to use a scope, take a gamble with the fixed sights on the gun, shine a gun-mounted flashlight onto the target or to avoid the shot altogether.