Did the Russian Ministry of Defense "uncover" 30 bioweapons labs during its 2022 invasion of Ukraine? No, that's not true: According to public records, most of these labs were already known to Russia, as they were formerly part of the USSR's "Biopreparat", developing defensive and offensive measures. Those labs were funded by the United States 20 years ago as part of a publicly known program to press Moscow to abandon its bioweapon programs.

The claim originated in a March 7, 2022, article (archived here) published by the Russian state-controlled news agency TASS under the title "Ministry of Defense of the Russian Federation: biological laboratories in Kharkov, Poltava and Lvov worked with plague and dysentery."

This is what the TASS article looked like at the time of writing: 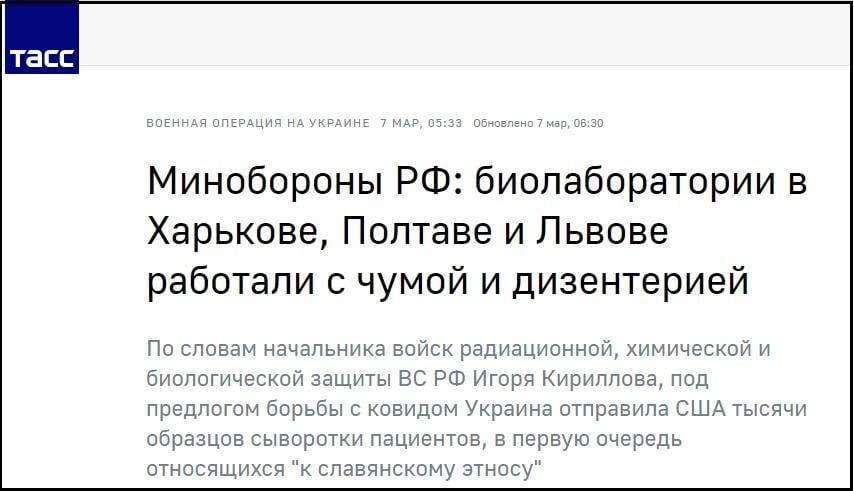 TASS wrote that that the Russian Ministry of Defense uncovered a network of 30 biological labs in Ukraine, citing Igor Kirillov, the chief of the Radiation, Chemical, and Biological Defense Forces.

However, the only public record that mentions a network of 30 bio labs anywhere in the former Soviet Union is an April 2000 U.S. Government Accountability Office report. The document describes U.S. efforts to prevent the proliferation of bioweapon programs in the region by funding their destruction, paying scientists' salaries and covering enhanced safety measures preventing hazardous biomaterials from being leaked or stolen from designated facilities in former Soviet republics that had become independent countries with the 1991 collapse of the Soviet Union. In total, 30 out of 50 former Soviet institutes participated in the program. It includes 15 of the 20 Russian facilities previously known for developing biological weapons.

According to the document, the primary area of concern was Biopreparat. During the Soviet period, this Russian-based entity manufactured "strains of dangerous pathogens, including anthrax, plague, and smallpox," overseeing multiple sub-facilities across the country.

As a result of the U.S.-funded program, some bioweapon-producing facilities ceased to exist. One of these centers was a large anthrax manufacturer in Kazakhstan.

Between 2000 and 2004, the U.S. was planning to allocate $39 million to destroy biological facilities in Russia -- "if Russia agrees." The report stated that while Russia's Biopreparat institutes, Vector and Obolensk, were not developing bioweapons at the time of the inspection in 2000, there was still a significant risk that the U.S. funding might unintentionally lead to the opposite results.

The program was funded in part by two agencies operating under the U.S. Department of Defense, the Defense Threat Reduction Agency and Defense Advanced Research Projects Agency (DARPA.)

DARPA is the Pentagon's scientific arm, but it does not conduct any research itself -- instead, it operates through awarding contracts to universities, nonprofits or private entities. In the past 14 years, it spent zero dollars on projects in Ukraine, according to government spending reports. The Defense Threat Reduction Agency (that paid salaries to Russian scientists in 2000) that Russia now claims funds bioweapons in Ukraine, in fact does the opposite. According to its website, the agency focuses "exclusively on countering and deterring weapons of mass destruction and emerging threats."

The only result that involved Ukraine and this DOD subagency in the U.S. government spending database is a $2 million award to the Science and Technology Center in Ukraine. But a closer look shows that the money was dedicated to Azerbaijan.

While the name of the recipient -- the Science and Technology Center in Ukraine -- may create a false impression that it operates as a Ukrainian research institute, it does not. It is an intergovernmental organization that receives grants from the United States and the European Union. Established in 1993, the Science and Technology Center in Ukraine states that its mission is "to develop and sustain a culture of nonproliferation" of weapons of mass destruction, including bioweapons.

More Lead Stories fact checks related to the 2022 Russian invasion of Ukraine can be found here.