During the Russia invasion of Ukraine, did Russia find "over 30" bioweapons labs "formed by the Pentagon"? No, that's not true: According to public records, most of these labs were already known to Russia, as they were formerly part of the USSR's "Biopreparat" developing defensive and offensive bio-measures. The United States 20 years ago funded a publicly known program to press Moscow to abandon its bioweapon program.

The claim originated in a March 9, 2022, Instagram post (archived here) published on the eorlando4 account under the title "China urges Pentagon to disclose alleged 'biolabs' in Ukraine 'as soon as possible.'" It continued:

Russia found over 30 biological labs (with evidence of bioweapons) in Ukraine formed by the Pentagon in areas bordering Russia.

In case the post is blocked or taken down, here's what it looked like at the time of writing: 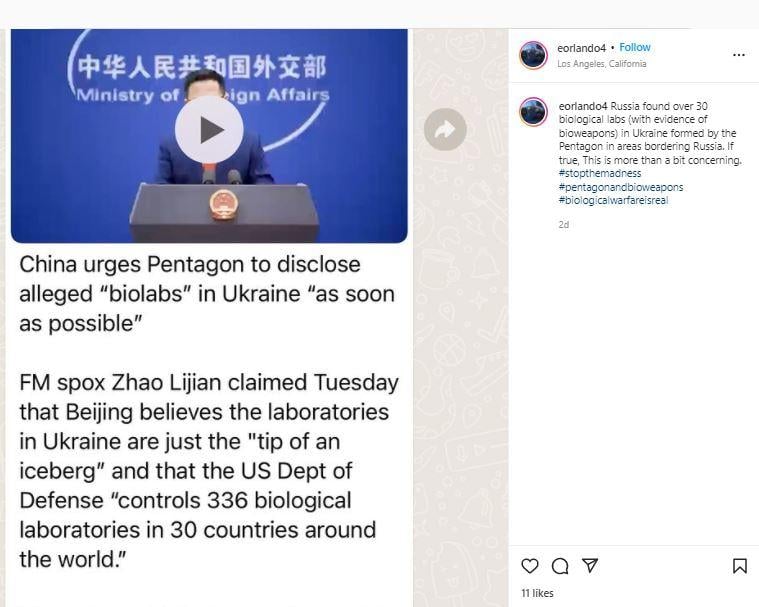 The post makes new claims as well as claims that mirror those made by Russian state-owned news agency TASS.

New false claim: Labs in Ukraine were "formed by the Pentagon"

The post offers no evidence for this claim, which directly contradicts the abundant public record. Several U.S. agencies hold documentation of the USSR's "Biopreparat" , which built and operated labs. The U.S. role, also publicly documented, was to provide the post-USSR governments with funds to decommission bioweapons, prevent leaks of biological hazards and employ scientists whose skills might be desirable to malign entities.

Russia, the inheritor of the Soviet Union's military command structure, already knew with precision about any such laboratories. Former Soviet scientists who worked on the program have described it in detail, as this March 2006 Technology Review article makes clear.

Tass reported in March 2022 that the Russian Ministry of Defense uncovered a network of 30 biological labs in Ukraine, citing the chief of the Radiation, Chemical, and Biological Defense Forces, Igor Kirillov.

TASS is one of several organizations misrepresenting the history and mission of the U.S. Cooperative Threat Reduction Program (CTRP). Lead Stories previously debunked a similar claim on March 2, 2022: Fact Check: There Are NO U.S.-Run Bioweapons Laboratories In Ukraine.

Robert Pope, director of the CTRP, said in an email to Lead Stories on March 1, 2022, that there are no U.S. bioweapons laboratories in Ukraine:

The Ukrainians own and operate their own laboratory infrastructure. The Department of Defense, through the Cooperative Threat Reduction Program, helps foreign partners like Ukraine with upgrading or building new labs that have the most modern equipment and training to be in compliance with International Health Regulations, and providing our foreign partners, like Ukraine, with safe and secure facilities to detect and identify disease outbreaks - before they become pandemics. Furthermore, Ukrainian Labs receive support and sponsorship from a range of international sources including the WHO, EU, and US Department of Defense.

Lead Stories has sifted through U.S. public records. The only public record found that mentions a network of 30 bio labs anywhere in the former Soviet Union is an April 2000 U.S. Government Accountability Office report. The document describes U.S. efforts to prevent the proliferation of bioweapon programs in the region by funding their destruction, paying scientists' salaries and covering enhanced safety measures preventing hazardous biomaterials from being leaked or stolen from designated facilities in former Soviet countries. In total, 30 out of 50 former Soviet institutes participated in the program. It includes 15 of the 20 Russian facilities previously known for developing biological weapons.

According to the document, the primary area of concern was Biopreparat. During the Soviet period, this Russian-based entity manufactured "strains of dangerous pathogens, including anthrax, plague, and smallpox," overseeing multiple sub-facilities across the country.

As a result of the U.S.-funded program, some bioweapon-producing facilities ceased to exist. One of these centers was a large anthrax manufacturer in Kazakhstan.

Between 2000 and 2004, the U.S. was planning to allocate $39 million to destroy biological facilities in Russia -- "if Russia agrees." The report stated that while Russia's Biopreparat institutes, Vector and Obolensk, were not developing bioweapons at the time of the inspection in 2000, there was still a significant risk that the U.S. funding might unintentionally lead to the opposite results.

The program was funded in part by two agencies operating under the U.S. Department of Defense, the Defense Threat Reduction Agency and Defense Advanced Research Projects Agency (DARPA.)

DARPA is the Pentagon's scientific arm, but it does not conduct any research itself -- instead, it operates through awarding contracts to universities, nonprofits or private entities. In the past 14 years, it spent zero dollars on projects in Ukraine, according to government spending reports. 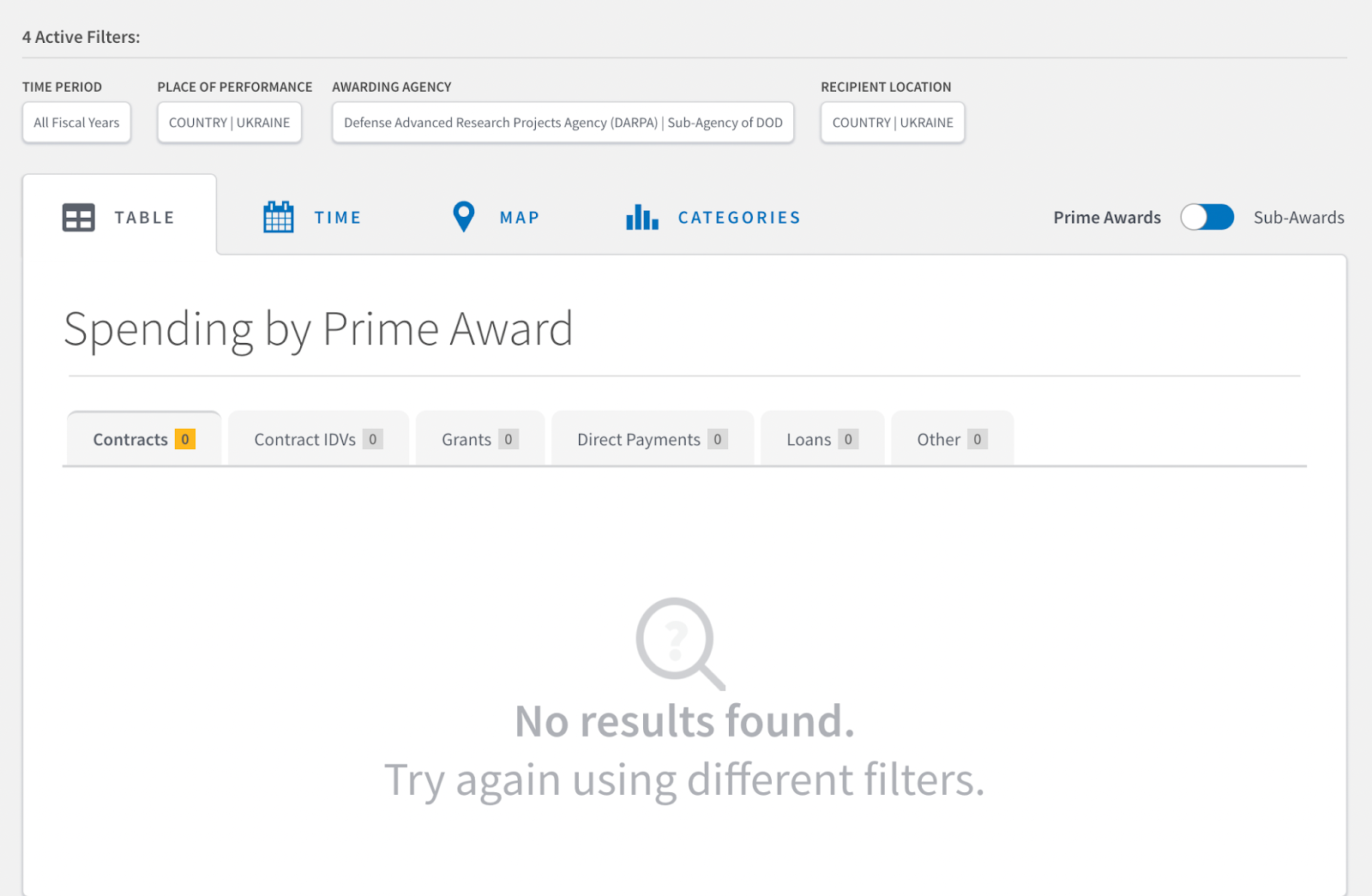 The Defense Threat Reduction Agency that paid salaries to Russian scientists in 2000 and that Russia now claims funds bioweapons in Ukraine in fact does the opposite. According to its website, the agency focuses "exclusively on countering and deterring weapons of mass destruction and emerging threats."

The only result that involved Ukraine and this DOD subagency in the U.S. government spending database is a $2 million award to the Science and Technology Center in Ukraine. But a closer look shows that the money was dedicated to Azerbaijan.

While the name of the recipient -- the Science and Technology Center in Ukraine -- may create a false impression that it operates as a Ukrainian research institute, it does not. It is an intergovernmental organization that receives grants from the United States and the European Union. Established in 1993, the Science and Technology Center in Ukraine states that its mission is 'to develop and sustain a culture of nonproliferation" of weapons of mass destruction, including bioweapons.